In the second panel of the DASICON2017, entitled “Current Conflicts”, the main focus was on the conflict in the Ukraine.

The danger of conflicts always rises from the shadows, where no-one expects them, according to host, Werner Fasslabend, for whom both the solutions to current conflicts as well as the attention for possible future conflicts are the central tasks of the OSCE.

According to chairman Martin Sajdik, Ambassador of the Ukraine Mission and representative of the Austrian Foreign Minister, various channels must be used, such as the bi-weekly talks held in Minsk – or even those in the bordering city of Soledar, where Russians and Ukrainians talk to each other on a regular basis.

In the Ukraine mission, there are four working groups which focus on key issues: political (Normandy format: Germany, France, Russia, the Ukraine), humanitarian (prisoner exchange) and economic developments as well as security. According to Sajdik, the OSCE cannot create political will, but it can create a framework for dialogue. Recently, however, the political will to talk has declined as there have been more dead and railway lines are blocked. 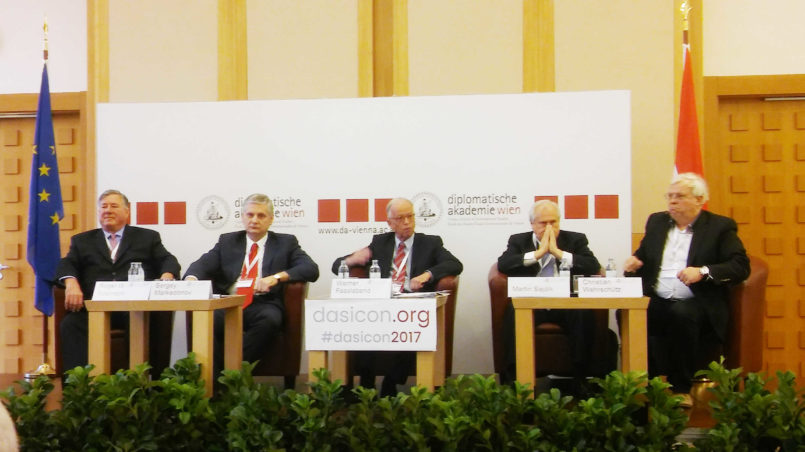 For Prof. Sergej Markedonov, the central problem of the Minsk Agreement is that there are two documents and the 25 decided points are very imprecise. Also, the Ukraine rejects the Minsk Agreement because it fears a failed state such as in Bosnia. Markedonov cannot understand the often-reproached accusation of the incalculability of Russian foreign policy, which he says has been constant for many years.

It is time that Russia and the West talk about interests and not about values; that the West should not hide behind these values ​​in order to pursue its interests.

Trump is popular in Russia because he stands for pragmatism and not for an emotional discussion on Western values.

According to Roger W. Robinson of the Prague Security Studies Institute, the Western world has not taken it too far with  NATO’s expansion for: “We are in the democracy business.” Conflicts today are being held on many levels: 20% are military warfare, 20% cyberwar – but about 40% of this so-called hybrid warfare is carried out legally within the global economy on the economic and financial level in order to exert pressure on smaller states.

It makes a great difference for these nations whether or not they are members of the North Atlantic pact.

Robinson’s Think Tank has developed software that monitors any money transfer by government or state-controlled companies in Russia and China around the world in order to monitor the attempts at interference and strategic interests of the two countries (NB: there is no such software for the US).

In the Odessa field in the Black Sea, oil reserves worth about one trillion dollars are stored. It is located in the Ukrainian maritime area, and the American oil company Exxon is involved in its development. Russia also pumps oil there and has deployed troops on its drilling platforms. Robinson believes that this hotspot will dominate the news in 12 to 24 months.

Are economic sanctions such as those against Russia successful? According to Robinson, yes, financial penalties in particular are very effective. However, most of the sanctions applied worldwide have been very weak.

An important weapon of the future will be to increase the risk of financial transactions in order to stop powerful fund managers from investing in sanctioned countries.

ORF correspondent, Christian Wehrschütz, opened his remarks with a comparison: drive through a forest in the Ukraine and Austria. While practically nothing could happen to us here, in the Ukraine, we might be shot at or a tank might suddenly appear from the undergrowth. Due to the complex situation, the OSCE mission along the border is very dangerous. According to Wehrschütz, the OSCE reports are close to the truth; in contrast to some media reports, they can be described as a reliable source.

Worst of all for the civilian population is the destruction of the infrastructure through warfare. Often, a truce is  negotiated to allow the repair of the most important equipment and installations so that the lives of ordinary people can go on somehow.

Donetsk and Luhansk have lived under a Ukrainian embargo for three years. All documents of the local inhabitants are no longer recognised in the Ukraine. Everything only works with bribery. Therefore, it would be absolutely sensible and important to at least recognise the new documents.

Wehrschütz is convinced that the current borders will also be the new borders for the future. The Eastern Ukraine will be integrated economically into Russia, because the current situation is cheaper for both parties.

He considers an imminent solution to be out of the question: for 25 years, Matthew Nimitz has been working (more or less in vain) in Macedonia to resolve the conflict there – and the Ukraine is probably even more complex.

Once again, Christian Wehrschütz voiced caution in placing the fate of ordinary people at the centre of such a hotbed of conflict. On the other hand, Roger W. Robinson is a man who likes to divide the world into black and white and, like so many others, hides behind the values ​​and denounces the interests of the opponents of the Western demands of power. And in between, a Russian professor, who, although representing a too rosy view of the Putin era, is not quite wrong with his pragmatic response to the excitement of the present day – to discuss interests rather than emotionally charged values.