Today FPÖ and Grüne presented their complaint against the Police State-Protection Law. It will be introduced in the name of both parties at the Austrian Constitutional Court and targets the complete repeal of this surveillance law. Authors are the lawyers of AK Vorrat.

What is the main problem with the Austrian Police State-Protection Law?

Tschohl: More to the point: What is not problematic about the Austrian Police State-Protection Law? It provides too many legal competences and insufficient legal protection. A regulation of counter-terrorism measures is highly welcome – but not like this.

It is not comprehensible why the instruments already provided have not been sufficient. We do not find any reasons why more interventions with less control should be legalized. The principal problem is: The possibilities for the government to systematically observe, are shifted to an earlier stage – to where there aren’t any tangible risks present yet. Furthermore, persons affected do not have the chance to learn of it.

That undermines the rule of law and represents a disproportionate interference in the private sphere and the freedom of opinion as well as violating the principle of equal treatment.

How does this affect us indiviually?

Scheucher: This problem concerns everybody: We are all social beings, we communicate with each other, within our family, with friends. But you cannot tell what contacts your conversation partner has. Anyone can therefore easily end up in a certain edge region, and as a result: be observed as well.

It is comparable to the waves of a stone thrown into water causing circular waves. The Austrian Police State-Protection Law does not fight actual danger but the danger of danger. This creates an „abstract risk“ that is to be eliminated. Under these circumstances it is no longer foreseeable who might be affected – and everyone can be. Thus, anyone can be suspected.

Tschohl: In the Austrian Police State-Protection Law, there are many statutory provisions which restrain and restrict the state power, but upon looking more closely, one finds that this is completely ineffective: There are some blurry legal concepts that ultimately leave entirely uncontrollable leeway, especially since the only controlling body has minimal resources and very limited authority. The result, therefore, is an extensive general violation of basic rights.

Why is it necessary to go to the Austrian Constitutional Court? What does the instrument „third“-appeal mean? What exactly is a „third“-appeal?

Scheucher: The law comes into force on 1 July 2016. One is under observation and cannot do anything against it. On the occasion of the retention of data, over 11,000 citizens volunteered to go to the Austrian Constitutional Court. Here, things might have been more difficult. As an alternative step it is sufficient if one third of the Members of the Austrian Parliament decide to support a proposal to regulate norms– and we have found this third after talks with all political parties.

One should not forget, either, that it looks “weird” to say: “I am against the protection of state”. This is hard to communicate to the public. The way we went is a therefore a very efficient but also courageous one.

Tschohl: The Austrian Constitutional Court, in this case, constitutes the corrective of the democracy. Besides it is also the “negative legislator”; it can repeal a whole law, provided that the legislator made grave mistakes. The main problem with the Austrian Police State-Protection Law, is that there are mistakes by ommissions – meaning the things left out: transparency, legal protection, and especially traceability.

People do not understand why certain things, which are subject to judicial authorization under the Austrian StPO (code of criminal procedure), shall suddenly be possible without any control. The legislator did not explain this to us at any point.

Scheucher: The Legal Protection Commissioner looks good on paper. However, he and a staff of three plus maybe one or two secretaries are facing a complete police force of about 30,000, plus about 270 officials of the State Protection Agency, while in addition having to conduct controls, sign all approvals and making sure that authority is not exceeded.

The Legal Protection Commissioner’s powers have massive shortcomings where he is not even allowed to control, not allowed to check foreign notifications, and where the person controlled can actually restrict access to files unchecked.

What is the structure of the action, what are the incorporated principal claims?

Tschohl: The action is prepared with regards to principle problem that we can only repeal things, submit applications but not create a preliminary wish list as to what we want to have incorporated. Our principal application, however, aims to repeal the entire Law, since it falls short in many respects. Furthermore, there are some passages that are problematic because of too many competences granted therein.

This is the reason why, as a matter of prudence, we have additionally contested several regulations which will only fall if the Austrian Constitutional Court decides not to repeal the whole Law. Many of the contested decisions must cohere – which is why we have made use of interwovenness.

However, our main goal is to repeal the whole Law because it is completely inconsistent with the rule of law.

Scheucher: We have tried to go one step backwards and to look at the system of law: Since 2011, in adding up the total of surveillance laws, we find that the liberal constitutional state is being creepingly transformed into a state of prevention. This may well mean that an erosion of the constitution is taking place to the point that we live already in another constituion.

That begs the questions: Are we ready to live with that risk of security? Are we ready to tolerate the risk of freedom? Or are we really buying into security offered in the shape of a police state?

Let us have a look at the “normal” investigators: Their job would be to control illegal acts that have already been committed. The “new undercover agent” made possible by the Austrian Police State-Protection Law starts his actions preventative simply to spy out a potential: So he behaves like an “informer”.

In this way a block leader system and a closely knit network over society is created. There is truly no end to this. The circle of persons of interest cannot, in fact, be limited. So even by behave in a legal way, in the future you will not be able to lock the State out.

Through what process might we arrive at a State Protection Law that is in keeping with our constitution?

Scheucher: If we see the things from a practical point of view we definitely need to discuss it at a very basic level. We must strike a balance of freedom and safety. We must stand together in these times and temporarily reduce freedom – this is an argument often used.

But there is no single example from history where freedom, which had been reduced was subsequently reinstated. So we can decide: Either completely succumb to the care of “Papa state” or we continue to try and live as free people.This must be addressed!

This is a principal problem. We need a fundamental discussion through all of society. We must strike a balance of freedom and safety.

Tschohl: It has been a long time since we came under unrestricted care of the State: It was in 1936, in the course of the Austro-fascism, when the State Protection Law ruled (showing the document). 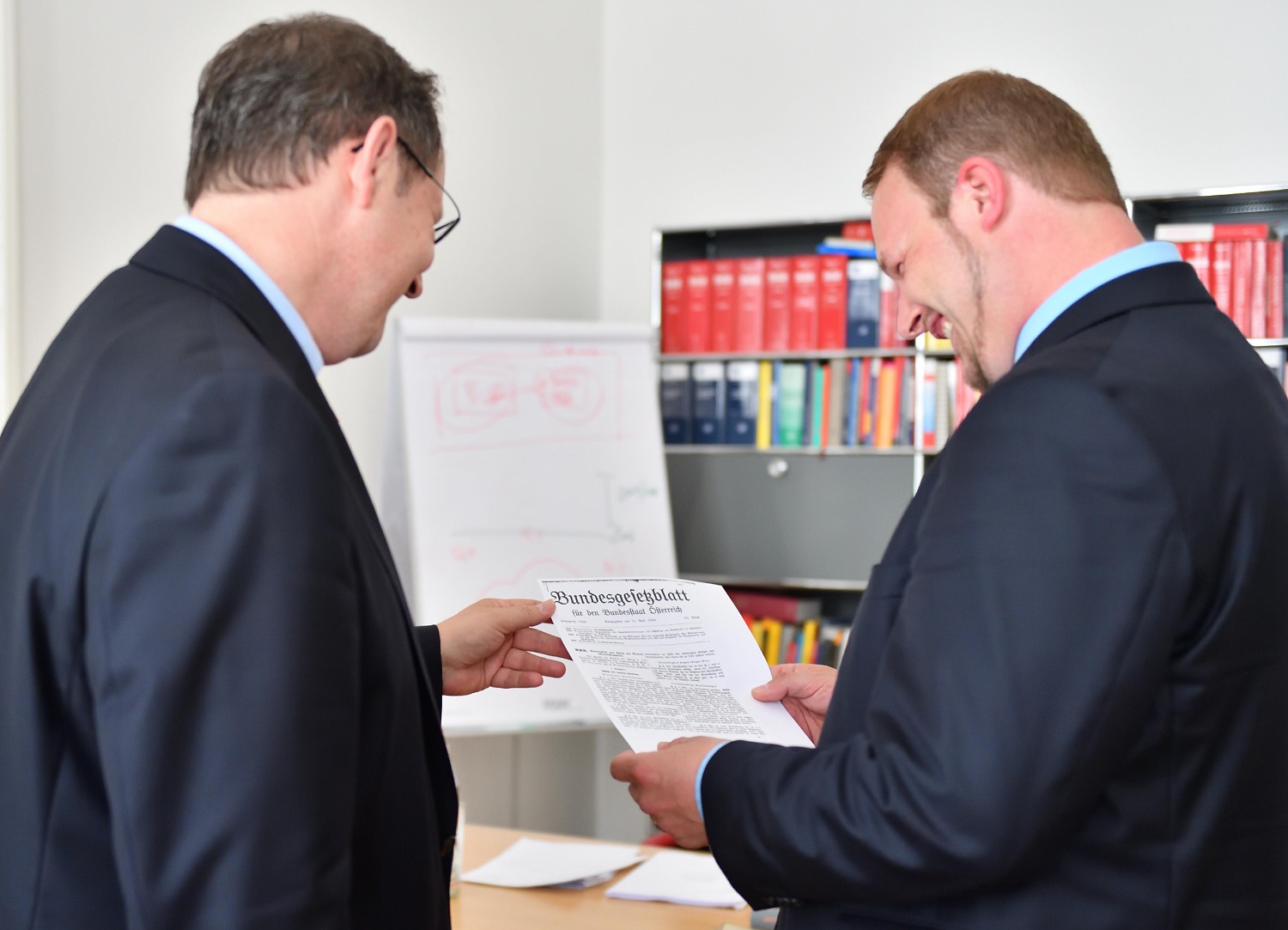 Are there already any data to lean on for a general debate?

Scheucher: In trying to make an assessment and to create a balance, you ask yourself: What do I have to take into consideration? You can’t look at the measures isolated from each-other and believe that you’ll be able to asses them with only the help of a particular database.

This is why it is important to make a total account of the surveillance state, and we did so: We are close to finalizing HEAT (Handlungskatalog zur Evaluierung von Anti-Terror Gesetzen – meaning: catalogue of measures to evaluate Anti-Terror Law). That way, we will have an instrument to use for serious evaluations.

How do laws impact freedom? Which measures really provide more safety? What are our values?

To me, that means our fundamental rights, the convention on human rights, the federal constitution – these contain values, freedom being one such value. And we should all be free. Respect is also a value. These values have to be protected. The Austrian State Protection Law, however, undermines exactly those values.

How long before we can expect a decision from the Austrian Constitutional Court?

Tschohl: The results cannot be expected before Autumn. By the end of the year, at best.

Scheucher: It is difficult. The Austrian Constitutional Court does not want anyone else prescribing their pace. Practically, it goes like this: Once the action is there, it is then delivered to the Federal Government to be stated upon. This can take up to 4 weeks, than it is sent back to the opposing side (to us); later, a statement of the statement is made; and finally at some point there is a public hearing. There, all concerns of all parties are discussed. Only then a final decision is made. And this is realistically for early 2017.