One year ago I was in Greece, on Lesvos island. The main arrival point for refugees trying to reach Europe from Turkey. The place that taught me that everything comes in twos. Pain and joy. Smiles and tears. Life and death.

I spent three weeks there volunteering both on the beaches and in the Moria camp. 21 days during which I felt all emotions possible: from grief and frustration to real happiness and relief.

Now, one year later, I’m here staring at this blank screen. I thought that now that time has passed I could finally describe this experience in a clear way, but it’s still hard.

On the other hand, when I was on the island, writing was not difficult. Not at all. It was a way to exorcise what was happening around me, which was, most of the times, bigger than me.

That’s why I will share some of my thoughts and experiences, as I wrote them. From the very first days to the day when the EU – Turkey refugee deal came into effect and to the first days back home.

This morning, as the sun was rising, a father handed me over his son. He was soaked, the tiny life vest was still tied around him. He was 6-7 years old, yet he seemed to weigh a lot with water filling up every centimetre of his shoes, trousers and life vest. He couldn’t stop shivering. And neither could I.

Despite all the videos and the articles and all the information I had tried to collect, being ready is so hard, almost impossible. And I feel like I’ll never be ready for this.

For the moment when the dinghy comes near to the beach, people start screaming, children cry and all we have to fight hypothermia are emergency blankets and some dry clothes. 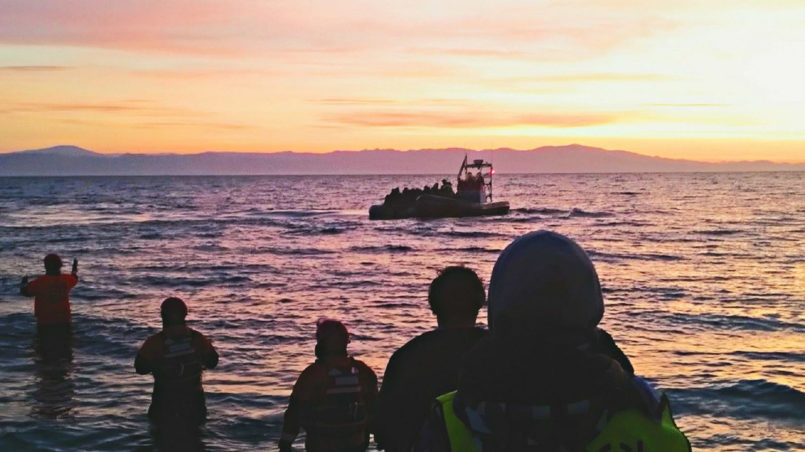 And what I keep thinking is that this is not the worst part. Cold, mud and closed borders are waiting for them. It’s a new hell, maybe not as bad as the hell that they’re running away from, but still hell.

Because “no one puts their children in a boat / unless the water is safer than the land […] no one leaves home until home is a sweaty voice in your ear / saying- / leave, / run away from me now / I don’t know what I’ve become / but I know that ANYWHERE / IS SAFER THAN HERE” (Home, Warsan Shire)

This is the third day that I’ve been working in the Moria camp and I’m still trying to get used to its whitewashed walls and barbed wire. From the outside it looks like a prison and from the inside you get the feeling that this is exactly what it is. A prison. Police and army are everywhere and you have to show your ID badge to enter the camp. No photos are allowed inside. The queues for the food are never-ending. Tension is palpable and sometimes it breaks out in violence. 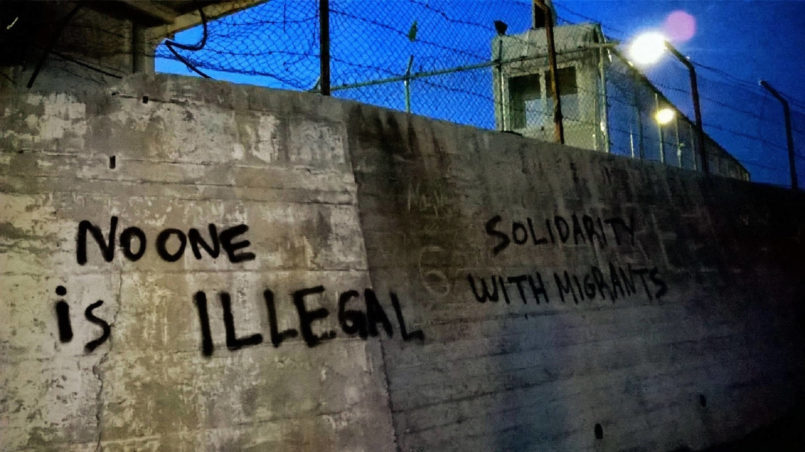 Today it’s rainy, windy and cold. “I have to tell you something”. In front of me there’s an Afghan guy, in his early twenties. I have just shown him the UNHCR hut where he can spend the night. On the floor, with other 20 people, in just a few square metres. Not everyone is going to be as “lucky” as him, as the camp is overcrowded.

“Since I’ve been in Greece, I really have seen what humanity is. In my country no one is helping us and the government is corrupt. Here I can finally see humanity. Thank you.”

I hug him and wish him good luck. Other families are waiting.

I can’t stop thinking about these words and I can’t stop wondering what he could have experienced in Afghanistan because what I see around me, in the Moria camp, is not Europe. It’s a place where humanity cannot be found, but only be lost.

It’s the second night shift in a row and I’ve never felt more tired. It seems like there’s too much that needs to be done and too little time. Clothes distribution at the port in the afternoon and night shift at the camp. Finding the time to cook, eat and sleep is becoming hard. It feels like we’re running against the clock. Sometimes I simply feel frustrated and start crying.

Just breathe in. And breathe out.

It’s been a strange night. Difficult and happy at the same time. In a way that’s only possible in a refugee camp.

Borders are closed and moving from the island to Athens takes more time than before. There are new arrivals every day and well-known faces who wait for us in front of our hut. We’re making friends out of strangers. We’re a little family now. They share with us their deepest hopes and dreams. They’re identified by numbers, yet they show their spirit and humanity in everything they do.

Listening to their stories is overwhelming. Guns, bombs, Daesh and Taliban brought them here. And that’s what the world sees them as: terrorists with guns and bombs. What I see is just human beings trying to find a different meaning to their life. Women alone with their kids. Children who have seen only war and death. Men who were the head of their families back home and who now feel like their identity is being stripped away. Most of the times they leave without their loved ones.

And then there are the children. Sometimes it feels so strange to see them playing around in the camp. Maybe it’s because they don’t see the barbed wire as we do. Maybe they simply have seen worse. Maybe this is nothing compared to what they have experienced. Or simply this is what children do: igniting happiness and hope where everything seems so dark. 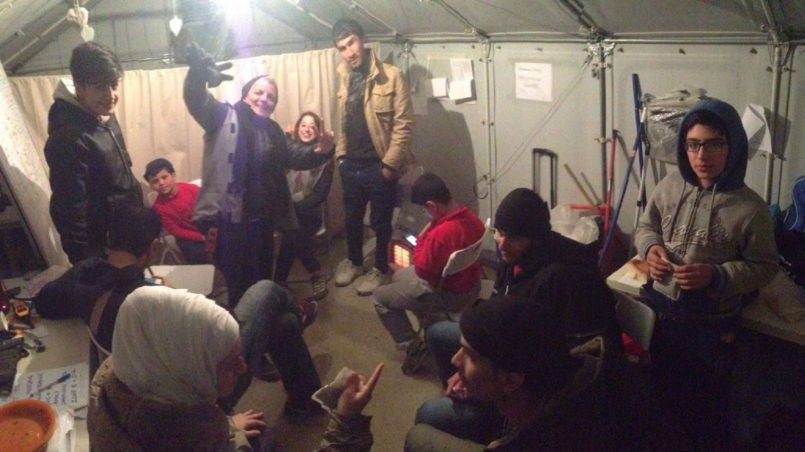 What I take home with me today, after my shift, is very simple, but it took me over two and a half weeks to finally understand it.

The point is that you don’t need a lot to change someone’s life.

And most of the time the people you’re trying to help will help you and change you. It sounds almost like a cliché, I know. But it’s not. There are no saviors and people who need to be saved. There are no refugees and volunteers. There’s only us.

Everyone has something to give.

The criminal EU – Turkey refugee deal has come into effect. Volunteers are kicked out of the camp. Police and army are everywhere and Moria is being emptied in just a night. It’s a detention centre now. Only those who came after midnight can stay. Or better, they have to stay. They still have salt on their wet clothes.

People are panicking and rumours of mass deportations to Turkey spread. Whoever has been registered has to go and leave the island as soon as possible. We force ourselves to smile, to tell them that:

No, I won’t let you become just another number. You’re not a number to me. I see you, I know your journey is long, but everything is going to be alright. 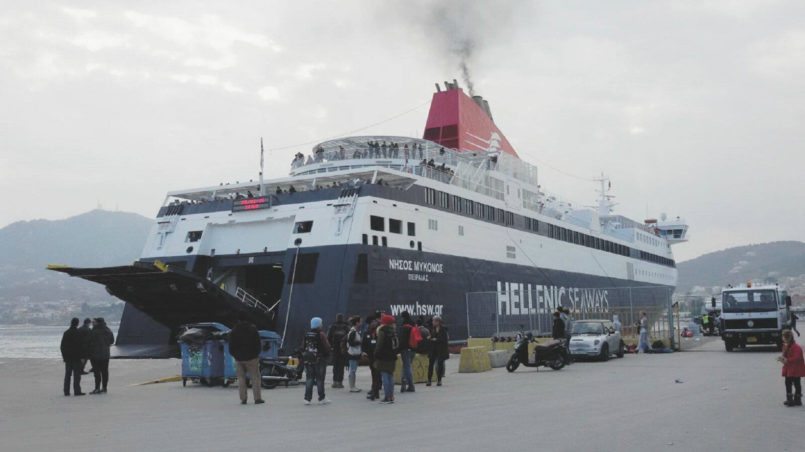 When the EU makes an inhuman deal with Turkey, the priority for everyone is to reach the port and take the ferry to Athens. Three Syrian women, three babies, another volunteer and I squeeze in our Nissan Micra. Together with blankets, backpacks and plastic bags. It’s all they have. With one hand I hold the steering wheel, with the other I pass the baby bottle to one of the mothers. Her little one is crying. We reach the port just 10 minutes before the departure and we run, dragging the bags and backpacks.

When the EU makes an inhuman deal with Turkey, it happens that I have only thirty seconds to say goodbye to one of the best guys I’ve ever met. Just the time for a hug and an “I’ll miss you”.

A policeman is yanking me by the arm. I have to leave the ferry.

After three weeks on the island of Lesvos, returning back to a state of normalcy is almost impossible. I feel like I’m experiencing my life from a distance. Everything will probably feel normal again soon, but for now, I just feel like a piece that doesn’t fit.

Five nights ago I was on the beach, the place where humanity gets lost every day and where, every day, human beings fight so hard to have it back. 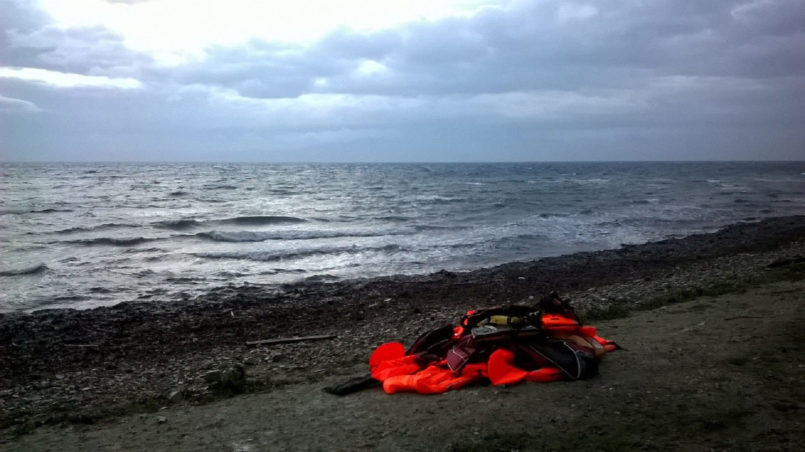 A woman hugged me and we stayed there, embracing each other, for minutes. I can still feel her wet clothes and her body shivering against my fluo vest. She can’t find her baby. I run to the dinghy and I can still feel the panic when they hand me over a tiny and soaked baby, just a few months old. I need a doctor. I can still feel the relief when he starts crying. Time seems to stand still when he’s finally in the arms of his mother.

How can you go back to being normal?

For now, I just feel like a piece that doesn’t fit.