It is a sensitive topic which brings us to the Diplomatic Academy today: Austria and Hungary have been closely connected for centuries – but, nevertheless, great rifts appear to have arisen since Viktor Orbán took up office in 2010.

Ambassador János Perényi has recently discovered many stereotypes which are reflected in discussions in the media and in public. For example, the “Putinisation of Hungary” is nonsense. Paul Lenvai also lent support to this stereotypical view when he – wrongly – interpreted Orbán’s speech in Siebenbürgen in 2014 as implying that the Hungarian head of government would campaign for an illiberal state. Orbán’s criticism, however, referred to the escalating economic liberalism.

According to Stephan Löwenstein, the country is deeply divided.

Because only few international correspondents live in Hungary, let alone speak Hungarian, they rely on others to provide information. And depending on what camp they are closest to, a distorted image of reality emerges. Orbán may indeed possess authoritarian tendencies but he is democratically legitimised as a result of the two elections he won.

Since 2010, however, an abuse of power is recognisable: in the latest electoral reform, the majority voting system was introduced (an idea which was also recently brought into play by Austria’s Chancellor, Kern), which would be beneficial for Orbán’s party, Fidesz. The constitutional court was restructured: the retirement age was reduced from 70 to 60, which resulted in reappointments at relatively short notice. The number of constitutional judges was also doubled.

Zoltán Kiszelly agrees with his ambassador: those who swim against the canon of western media will be discredited. He explains the change in the Hungarian concept of democracy as follows: in the 90s consensual democracy was popular. Because this did not lead to the desired success, it lost its appeal. Due to the late democratisation after the end of the Cold War, Hungarians always feel as if they are taking part in international developments only belatedly.

As a result, the modernisation of democracy was forced, which led to the introduction of the majority voting system. Currently, this is advantageous for Fidesz but times can change. Kiszelly observed that the last election of constitutional judges took place with the approval of an opposition party. And:

Hungarians are clearly for democracy and capitalism – they suffered long enough unter communism. A “Putinisation” is, therefore not at all possible.

In order to be able to understand Orbán’s transformation from a liberal to a national conservative politician, one has to go back to the year 1994. At that time, as the Vice President of the Liberal International, he tried to form a liberal opponent to the socialists. The SDS, however, pulled out of the intended cooperation and formed a coalition with the left. Today the liberals have no hope of success, Orbán’s Fidesz has blocked out the national liberal camp.

According to Sándor Richter, the economic situation has improved under Orbán: public debt has fallen, unemployment has decreased, economic growth has risen, the problem of private foreign exchange loans has been solved. Nonetheless, many problems remain: no solution has been found to the Roma question and, above all in the social area, there is still much to be done, inequality has risen dramatically.

Orbán’s economic policy is a mixture in all possible directions which Richter names eclectic: neoliberal features can be identified in unemployment benefit, which is only paid for three months, in the flat tax and in the extremely company-friendly labour law. Alongside these, one finds Keynesian concepts, for example, the nationalisation of pension funds and the taxation of banks and multinational companies.

A clear strategic direction is not recognisable.

According to Kiszelly, the current government is not copying Horthy’s policies of the 1930s but rather the period of the Austro-Hungarian Compromise of 1867. Four sectors should largely be under national control: banks (in the meantime 50% of the market is in Hungarian hands), energy, retail and the media.

Orbán is a fan of Trump, above all as regards the latter’s position on migration, transnational companies and the question of the interference in other countries (“the export of democracy”).

Can Orbán’s economic policy succeed? According to Löwenstein, the figures add up. However, emigration has increased greatly since 2007. Corruption is also a growing problem as control mechanisms have been almost destroyed.

Many Hungarians already work abroad, reports Kiszelly. Prior to Orbán, they returned to the country to pay off their foreign exchange loans and the interest due with the money they had earned. This senseless circle has been broken with the containment of (above all) Swiss franc loans and the nationalisation of several banks.

Nowadays, loans in the national currency (Hungarain forint) are once again much in demand. As such, one is more independent from abroad. After the experience of Greece, the way out via the IMF was deliberately not chosen. 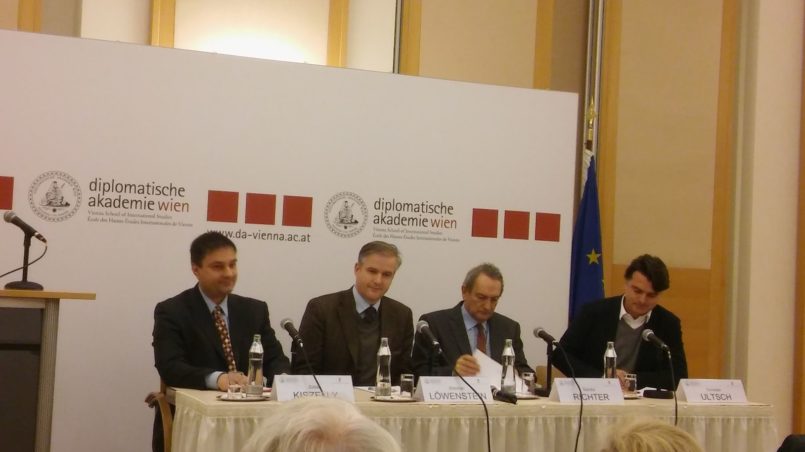 There was some disagreement as to the discontinued newspaper, Népszabadság: Sándor Richter spoke of  the execution of an opposition quality newspaper. Employees were not informed and the archives of the newspaper were closed overnight. The commentaries in the media loyal to the government as regards these events were clearly understood.

Zoltán Kiszelly replied that an Austrian investor had sold the newspaper and discontinued it because it was no longer making a profit. The opposition press continues to be strong and regularly criticises Orbán. That the newspaper was closed down in the middle of a series of articles on corruption at the weekend and that the editors were denied access to their data at short notice casts a poor light on this action, according to Stephan Löwenstein.

The economic background – there were indeed losses – can also not lead to the shutting down of a newspaper from one day to the next.

How does Hungary see its role in the EU – and what kind of Europe does Orbán envisage?

Form 1955 to 1990 much time was lost – in contrast to Austria, there was no accumulation of capital in this period of time as a result of communist rule. Therefore, after the fall of the Iron Curtain, one was happy to be able to join the EU. Orbán gets on well with Cameron: both are opposed to Juncker’s centralisation plans, both support national sovereignty. Brussels and Berlin are moving in the wrong direction, according to Orbàn.

Poland and Hungary have a common approach: yes to economic cooperation and joint defence (Hungary is a supporter of NATO and wants to increase its military budget to 2% of the GDP) but beyond this, everything should be decided in the national states, including the question of refugees.

Incidentally, it is interesting that accusations of corruption are always raised against Hungary when important decisions in Brussels are pending. If these decisions are made, blocked money is immediately released again.

How much political weight does Hungary have? Can Orbán be an adversary of Merkel?

Every year Hungary receives approx. 3% to 3.5% of the gross domestic product in transfer performances from Brussels, in some years up to 5%. This contributes to the economic growth as does the 2-3% of the GDP which is transferred to the homeland from the Hungarian labour migrants from the EU every year. 75-80% of the exports are to the EU.

Hungary has a significant trade surplus with the EU – 15 years ago the opposite was true – and, as such, according to Sándor Richter, it has a very strong position in the EU. In 2020 the new financial period in the community begins.

Here the question arises as to how much money will flow to Hungary in the future. Threats such as those from Italy that the amounts will be cut if no solidarity is shown in the refugee issue have been voiced. The net beneficiary status has to be well-grounded and is not a self-evident fact.

Hungary’s economy has to open towards the east, in Kiszelly’s opinion. The connection to the west has to be maintained but trade in the east with Russia and China has to be increased. As regards the money which comes from Brussels, Kiszelly believes that it above all falls into the pockets of western companies which execute infrastructure projects in Hungary. Since 2010 this has changed and now the leading companies come from Hungary but they work together with western sub-contractors.

In relation to the refugee issue, Kiszelly says that “nobody should be followed”: if Germany and Austria wish to take in so-called refugees, then that is their business. There should, however, be no compulsion. The Visegrad Group emphasise flexible solidarity: the safeguarding of the Schengen external borders is their contribution.

The same is true for Orbán’s proposal that all net beneficiaries should forego one percent of the money from the EU and place this money at the disposal of the refugee camps around Syria. According to Kiszelly, a person is only a refugee when he crosses over exactly one border and not seven or more. For this reason, the current situation is also not comparable with the Hungarian Uprising of 1956.

If states accept refugees, this has to be democratically legitimised. Such a majority does not exist in Hungary. Further, there is almost no coverage in the west of the Ukranian refugees who have found accommodation in Poland and Hungary.

If there are no major changes until 2018, Kiszelly expects that Fidesz will gain an absolute majority in the parliamentary elections which take place in this year. The left are divided and the currently planned alliance with the right extremists is hardly viable.

Orbán’s popularity, despite six economically difficult years, can be explained by the assumption of the rigorous position taken by the right extremist, Jobbik, in the refugee question since the summer of 2015. He has thus taken the wind out of the sails of the greatest competitor on the right.

It will be interesting to see how Hungary’s relationship to its neighbours, in particular Austria, will develop.