With “We demand (open) space” a petition was started on Saturday, 17th September at the PeaceParade in Vienna.

The title possibly suggests that we all live in much too confined spaces and that we want to break out of this mess. But this isn’t the case and something much different is meant:

The petition is about making public places available for all citizens without being removed from such places, as the authorities sometimes do. If more than three persons are present at one time and place, this is considered a meeting, an assembly, which requires registration. If this indeed made any sense, “demonstrations” at railway stations would constantly have to be registered. If someone wants to register a demonstration, it is easier to enter Kafkaland. Larger events are a Kafkaesque affair. Only a few are aware of the fact that public space is divided into federal and state areas, which are normally in the hands of a holding agency. The jungle of fees is beginning to grow rampantly. One quickly becomes disheartened.

But that is not the whole story: Let’s assume that you own some real estate in Vienna. If your property prevents the construction of the underground, it could be partially or fully expropriated. As only a few people know: the public interest goes before the common interest.

Open areas are also a part of open spaces. Only advertising agencies with an appropriate budget can afford to legally promote their events. Small associations and event organisers, on the other hand, have to resort to spaces adorned with graffiti and one work of art after the other gets into the way. Here, only a quick photo can permanently capture the sprayed opus.

Empty buildings are also an issue. In Vienna, there are approximately 80,000 inhabitable properties, which are simply empty. Most of these are in the inner city. At night, they become obvious because no light ever shines in them. Not to mention the forgotten underground rooms and passages. One of the most remarkable halls is the former so-called “ice cellars” in the third district. Squatting has gone out of fashion following the PizzeriAnarchia squatting incident.

What remains is once again the “begging” (in the sense of “it’s not what you know but who you know”) for temporary use or one becomes involved in the permit-madness. The thirst for 24/07 cultural centres remains and is growing fast.

The “micro-collective”, the main organiser, invites everyone who wishes to have a voice in designing spatial policy to sign the petition: We demand (open) spaces! This year’s PeaceParade Vienna was not only supported by numerous sound systems. Three associations, which have been politically committed in society in recent years, showed how peace works. In reality it is a small team of people with experience in the organization of events who have often worked together and who can efficiently co-operate with each other. As a team, they have created a framework to enable diverse groups to participate.

And this became reality: approximately 2,000 people gathered between Heldentor and Maria-Theresien-Platz in Vienna this year.

The PeaceParade is not an event in the commercial sense – everyone works voluntarily. It serves as a political demonstration for groups that want to present themselves in public spaces.

The institutional control addiction, compulsory fees, and over-regulation restrict the development and growth of our society – however, community spirit and diversity as well as freedoms should be encouraged rather than limited everywhere.

The PeaceParade supports a range of issues worthy of support and taking a stand on. The intention is to have fun, meet new people, expand networks and discuss issues. A possibility to have a say in shaping our society has been created for everyone. And the PeaceParade is such a possibility. Every year the PeaceParade leaves us a message, good memories and a good feeling. Something that moves the participants – and touches their hearts. Something that people can talk about, can discuss – a memory of a day of togetherness, of freedom on the street and a feeling. Perhaps food for thought – that together we can achieve more. But also that we have to not only know our rights but have to demand and stand up for them.

To assemble, to make and maintain social connections, to discuss, to talk, also to dance and have fun is only natural and a right of every citizen and not dependent on the mercy of the authorities – there is a law of freedom of assembly – public property belongs to all of us. 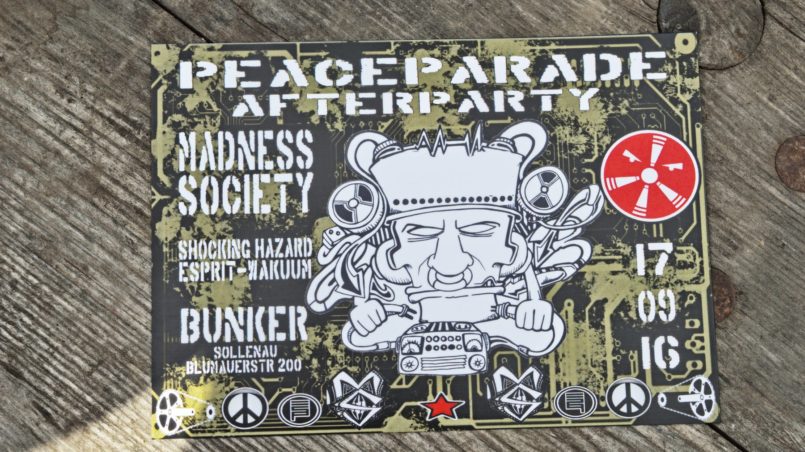