It wasn’t easy to choose between Nablus and Jenin. But the choice had to be made. And I chose Nablus. The initial plan was to visit both cities on different days but at the last moment changes were made by the organizers and there we were, left with no other option but to accept their decision. I still wonder why the plans in the youth camp were never concrete. Those last moment changes and improvised plans really annoyed all of us.

I woke up in the morning, and got ready to visit the city of Nablus. I was completely unaware of the changes; of the choice that I would have to make. I went to get my breakfast. The dining hall was quite far away from our rooms. It was in a different building altogether. Our accommodation was in the Palestinian Police Academy. It was a really huge compound with many different buildings. While walking from my room to the complex which houses the dining hall, I came across one of the coordinators. He was having a conversation with one woman from our group who was a diasporic Palestinian. She looked enraged.

I passed by them and went into the dining hall. The atmosphere in the dining hall was not pleasant. I could sense a lot of tension. I soon found out that the coordinators had informed the others that we would have to choose between Nablus and Jenin. We were told that, “We cannot visit both cities as there is not enough time”. This was not acceptable to any of us.

The itinerary clearly assigned different days for visiting Nablus and Jenin. Both cities are extremely important places. How could we choose between the two?

Finally at the last moment, a meeting was held with all the participants and the message was conveyed by the organizers that we had to split into two groups. One group would visit Nablus and the other Jenin. There was a lot of disagreement and a heated discussion followed. However, the organizers’ decision couldn’t be changed. We just felt that it was a completely unilateral decision forced upon us. They behaved somewhat authoritatively. Reluctantly, everyone chose one or the other city. I chose Nablus, though I equally wanted to visit Jenin.

We boarded the bus that would be going to Nablus. A Palestinian from Nablus volunteered to be our guide. He started telling us about the important aspects of Nablus.

Located between Mount Ebal and Mount Gerizim in the northern West Bank is the beautiful city of Nablus. It was interesting to know that Nablus is home to the Samaritan minority and nowadays a few Samaritan families live in Nablus. An ancient Samaritan synagogue is still in use in Nablus. It is believed that the Muslim population of Nablus are descendants of the Samaritans who converted to Islam. Currently, the population in Nablus is predominantly Muslim, with small sections of Christians and Samaritans.

We were informed that there are many archeological sites, several mosques and hamaams in the old city of Nablus. The old city is also swarmed by many tanneries, pottery and textile workshops and souks (bazaars). However, Nablus is famous for its soap industry and “kanafeh”.

We reached the city, which looked like a busy commercial center. I had imagined something else. There was a mall and many high buildings with restaurants and shopping centers. The city did not have the aesthetic beauty of Ramallah (which also seemed commercially important) but nevertheless it has a good infrastructure and a bustling commercial feel about it. 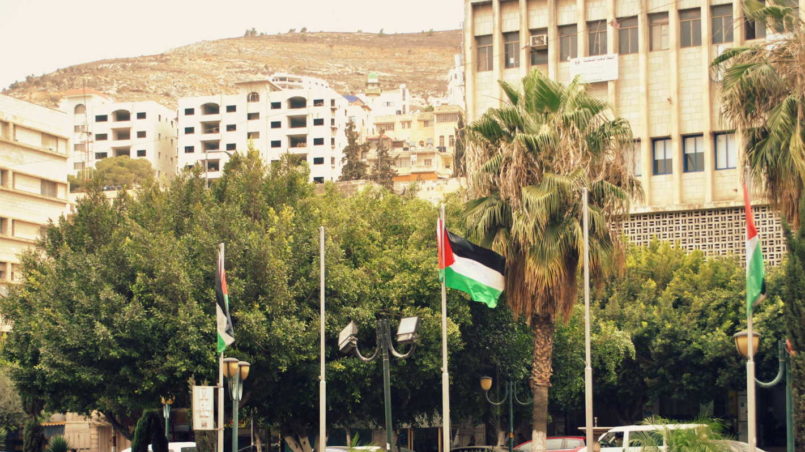 We started to walk towards the old city. The path to the old city took us through many souks. There were street stalls and shops selling different merchandise, vegetables and snacks. I bet a person who is new to the city would always get lost in the maze-like streets of the old city. I have to confess that I loved the labyrinth of pebbled streets in Palestine. They gave me the feeling that I was walking in an ancient country in some distant past. There were many times when I lost my way in those narrow pebbled streets with shops on both sides. 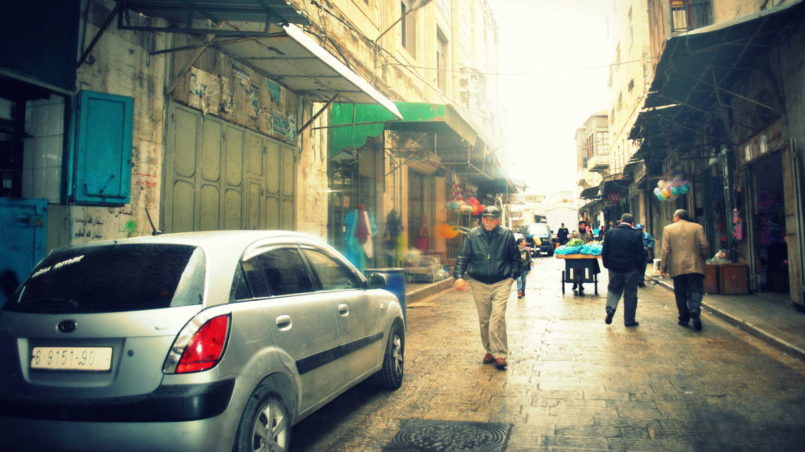 Finally we reached a place where everyone was asked to take a break and enjoy kanafeh. It was one of the oldest as well as one of the most famous shops that has been selling Kanafeh for a long time. I really got very excited. I had heard a lot about this famous sweet dish from Nablus. Kanafeh originated in the 15th century and used to be exported throughout the Ottoman Empire. It has become a famous sweet throughout the Middle East, but still “Nabulsi Kanafeh” continues to enjoy its undisputable fame. We were also showed how kanafeh is prepared.

The moment I took one bite of kanafeh, I realized why it is so famous. It melted in my mouth and was extremely tasty. We packed a few boxes of kanafeh, for those who had gone to Jenin. They shouldn’t miss out on tasting Nabulsi kanafeh just because they chose to visit Jenin.

We found out that Nablus had once had a thriving soap industry and almost three-quarters of its soaps were exported across the Arab world and to Europe. In fact preserving the Nabulsi soap factories is like preserving the cultural heritage.

I learnt that Nabulsi soaps still enjoy a reputation for being a very fine product. The soap is made from virgin olive oil, water and a sodium compound and is formed into small cubes, which then have the seal of the factory stamped on them. We had a tour of the soap factory, where the owner of the factory explained to us the procedures involved in manufacturing olive soap in the traditional Nabulsi manner. The soap factory was really a very old building – around 400 years old. After the brief tour of the factory, I decided that I wanted to buy some Nabulsi olive soaps. They are more like souvenirs.

Any tour of a Palestinian city cannot be complete if one does not encounter stories of oppression and torture. In every city we were made to visit those sites where massive killings and destruction took place. Maybe it is a way to prevent the world from forgetting that Palestinians are still struggling and fighting against oppression and injustice.

Nablus has a long tradition of political activism and was at the forefront during the First and Second Intifada. This led to Nablus becoming a flashpoint between the IDF and Palestinians. The city experienced several days of 24-hour curfews and massive destruction of houses and other monuments.

We were taken to a place where much destruction of life and property took place back in 2002 due to Operation Defense Shield and Operation Determined Path carried out by the IDF. The walls were full of graffiti and some stone carvings that pay homage to those who died fighting for their country. Stories of loss and pain abound. They leave us with a feeling of despondency. After a while we left the place and started walking towards the new city of Nablus.