In the second part of the discussion, “Are we living in the time of populism?“, the issue of left-wing populism is discussed and a look at the prospects for the near future is taken.

Mr. Bude, you remarked that politicians fear the people’s fear. But you also said that fear is the cement of society. That actually sounds like a contradiction…

Yes, but I believe that, in order to rank this phenomenon, it is important to understand that, globally, we have experienced a period of mistrust for 20 years. And mistrust has become an extraordinary socialising, powerful movement.

However, it also includes a diagnosis of the present, as we are at the end of a period, which did not bring us anything good. Let’s call it neoliberalism. The idea of a good society being a society of strong individuals.

And now there is a new phenomenon – namely a turn from the strong “I” to a possibly stronger “we”. Currently this issue is rather taken up by the right-wing, therefore we have a solidarity vacancy on the left-wing and a strong solidarity movement on the right.

The desire for solidarity is also a great motivation.

I hardly see such movements in Europe, one can include Syriza or Podemos and the Parti de Gauche. Chantal Mouffe rightly stressed that, in western countries, consensus politics are followed too strongly: the mainstream parties agree that there really is no longer any other real alternative. This unified policy appears very strong when large coalitions are in power together for longer periods.

And this question is justified: are western democracies still set up in a way that we have a real alternative if we vote for an either conservative or social democratic party, or is this in principle irrelevant? 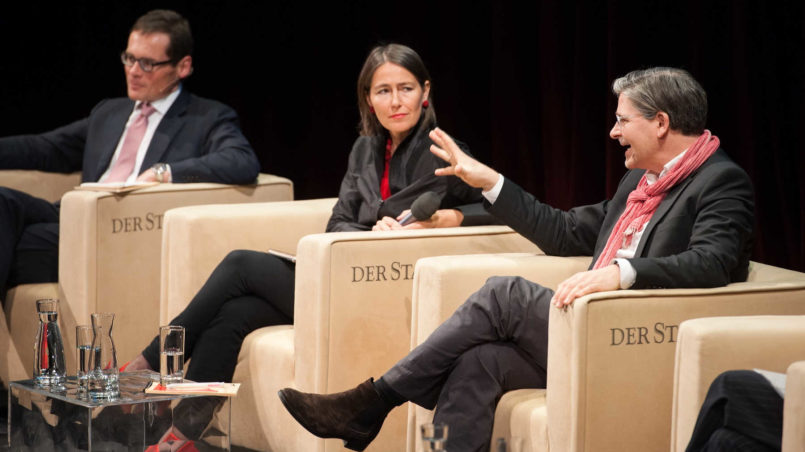 Mr Müller, in this respect you disagree with Mr. Priester: in your opinion, Syriza and Podemos are not populistic parties, although Podemos characterise themselves as such…

If it is then said that populists are anti-EU, then one forgets that Syriza and Podemos are not like the Front National: they are not per se anti-EU, they only want a different Europe.

I do not see a fundamental anti-pluralism in these movements. In addition, it becomes clear that the system is not questioned by these parties, which is what populists are happy to do when the election result does not meet their expectations or rather does not turn out for their benefits. They go to vote and accept the result.

You clearly see Christoph Blocher, the boss of Roger Köppel, as a populist. Mr. Köppel has dissociated himself from being a populist. How do you see this?

Everyone can think for themselves what a sentence like “Swiss vote SVP!” could mean against the background of my approach.

Mr. Bude, is the SVP a populist party in your opinion?

Heinz Bude:
Well, yes. With Blocher it is like with the AfD, he addresses correct and important matters, but what always resonates are these resentments, such as the Nazi-nonsense with the AfD.

Ms. Priester, are we now living in a populist era? What is your opinion on this?

In a long-term analysis one can show that populistic parties always emerge in a cycle of approx. 20 years, triggered by certain problems, such as the EU and migration. But then again they also vanished very quickly, if they were not able to merge to a party, like the Front National.

Mr. Müller, are we in a phase of a downward movement of the populists?

At the end of last year, according to the media, the era of populism has started, a wave – first Brexit, then Trump – spread worldwide and washed elites away everywhere. But the language used here is principally the language of populism: everywhere the people rise up against the elites.

But more important is the following: Farage did not cause Brexit alone, he needed his established conservative allies as helpers. Trump would not have gotten so far without a large, established party’s support. This means that no populist alone has achieved real success without a collaboration of conservative elites.

After the election in the Netherlands, the following was announced: “Now everything has turned, we’re living in a post-populistic era!” And thereby the heart of the problem was overlooked, as the obviously populist Wilders lost, but the contents were accepted by Rutte, and therefore Wilders did, in some way, manage to accommodate his ideas. And like this it comes to a very slow shift e.g. to the right.

It is therefore important to not only keep an eye on the populists, but also on those, who cover them. 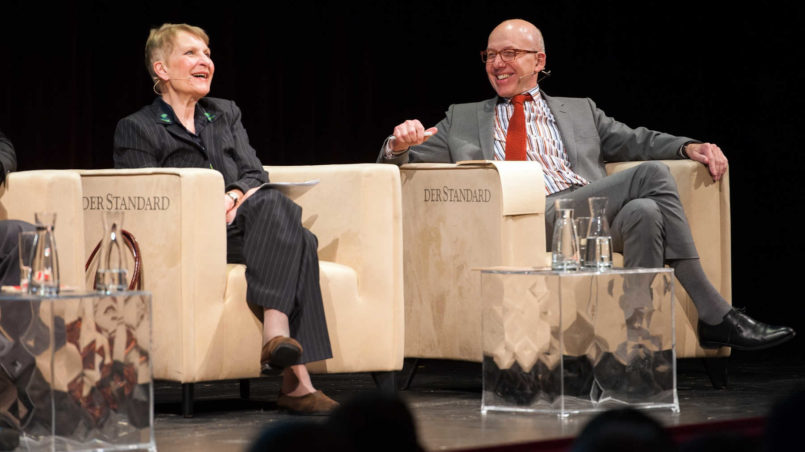 Heinz Bude, your answer to the question?

There are two questions which have to be posed: these are the great issues of “social desperation” and “miscarried self-esteem”. It is an enormous political challenge to bring these together.

I dare to make a cautiously optimistic conclusion. More willingness to talk exists, one takes on the reasonable concerns and thereby weakens the populists.

I would agree as regards the optimism.

With Brexit and then the election of Trump it has become clear to everyone: if you vote for right-wing demagogues, you will get right-wing politics.

What I have noticed: we, the SPÖ, were only successful when we were at the vanguard of change. In the middle of the political spectrum a self-sufficiency has developed in the last couple of years.

I believe that only when one is in a position to show that progressive political forces want changes in line with the population will the populism phenomenon also be put into perspective. 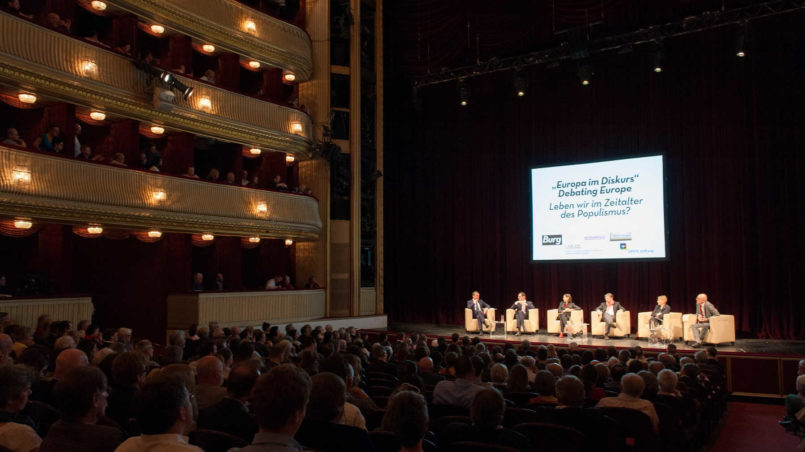 The event in the Burgtheater was sold out, the interest for this issue was great. There was no possibility for questions from the audience.