“Moch” refers to one of the oldest traditional beliefs that still exists as a spiritual disease among the people of most of the remote and rural areas in Nepal.

“Moch” is a typical Nepali word which relates to a certain kind of traditional belief regarding health and disease among Nepalese communities.  The disease or belief as regards the “Moch” is typically related with females in Nepal. However, somewhere it is also found that if a man comes into contact with “Moch”, it will have consequences for his family life. Therefore, men are affected by it even if only indirectly.

Although the people of remote and rural areas of Nepal are quite familiar with the disease or belief in the “Moch”,  the word itself as well as the belief are unknown to the majority of those living in big urban areas.

Actually there are two beliefs regarding “Moch” in Nepal.

The first one is, if somebody says that someone is affected by the “Moch” in Nepal, people understand this as meaning that a pregnant or married woman is successively losing her children, pregnancy after pregnancy, but this is a superficial and limited way to understand the “Moch”. The second belief regarding the “Moch” is that it is a certain kind of egg-like being with a tail that is made up of meat or flesh and, if it is either seen, crossed or stepped upon by anybody, this is a very bad sign for him or her. It is believed that afterwards they will be punished by the “Moch” for their whole life.

Regarding the history of the “Moch”, people in Nepal believe that when a comet or shooting stars fall to the Earth, they bring the “Moch”with them. It is believed that the “Moch” especially falls on places such as open grounds or large open holes on the surface of the Earth if it falls outside the home or in the external environment.

But, if it falls within a home, it either falls on a bed or inside the pots in which people prepare curd in the remote village areas. In terms of appearance, the “Moch” look like a comet or a shooting star or like eggs with a tail. The “Moch” is composed of flesh. The head looks like an egg and the tail, which is basically grey in color, like the intestines of birds or human beings.

The “Moch” is rarely seen or found. Regarding beliefs surrounding the “Moch”, if a female girl, youth or woman who is capable of reproduction sees the “Moch”, or steps over it with her two legs or body or steps upon it, she will be punished forever by that “Moch”. As a result, she will never bear children or, if she does give birth, none of the children will survive.

It is believed that the severity of loss by the “Moch” depends on the manner in which the woman came into contact with the “Moch”. If a woman sees the “Moch” from far away, it may not effect her so greatly, if she steps over it with her two legs or body, the effect may be greater and if she steps upon it with one of her legs, this may have a huge impact on her life or pregnancy.

Something similar will occur with a man. He may lose many children within his family. If any woman in Nepal loses her children repeatedly, people believe that either she has been punished by the “Moch” or she may have stepped upon the “Moch”.

The women who it is said have been punished by the “Moch” either may not have any children at all or, if they bear children, they may lose 2 to 18 children repeatedly but the count is not fixed. With this disease, the pregnant women may suffer a miscarriage at any time. In most cases, the pregnant women miscarry in the fourth, seventh, eighth or ninth month of their pregnancy.

The “Moch” is a successive infant killer in Nepal. The people in Nepal use different types of traditional treatment methods regarding the “Moch” depending on their caste, religion, customs and traditions. In most places in Nepal, for the treatment of the “Moch”, people make something which is similar to the “Moch” in appearance from corn flour dissolved in water or honey. They tie a thin rope at the bottom of the head of this “Moch” and hang it from the head to the foot of the woman who is affected by the “Moch”  but they are not allowed to touch the ground.

At this time, the woman who is being treated with this “Moch” is not allowed to open her eyes. Afterwards a traditional healer says some mantras (words) heartily and the “MOCH” falls to the ground from where the traditional healer takes it and either hides it or throws it so far that the woman affected by the “Moch”  can never find or see it again. It is believed that in this manner, the effect of the original “Moch” is lost.

Until now in Nepal, we have not been able to find anything written about “Moch” in the medical literature. According to medical science, there is no such disease as the “Moch”, it is merely a belief and that the “Moch” which people see is a part of the intestines of small birds which is very hard and can’t be easily taken. Some of the larger birds of prey cannot eat this hard part of the intestines and they drop it to the Earth from the sky and this is what people call the “Moch”. However, people in Nepal have a false belief regarding the “Moch”.

Before writing this article, I found one woman in the Chaurjahari Hospital, Rukum, who had been repeatedly losing her children. Her name was Keshari Singh from Sakla VDC, (Village Development Committee) of Jajarkot district who had lost four children one after the other.

Now she is pregnant for the fifth time and she came to the hospital to save her pregnancy. Before this, for the last three times, she applied traditional methods of treatment thinking that she was affected by the “Moch” but all treatment was unsuccessful.  In this pregnancy, she decided to come to the Chaurjahari Hospital, Rukum to save her next child.

Upon further investigation, I found another woman from Bijayashowri VDC who had lost 18 children in her life. Currently she has two children and is the wife of the principal of one of the most famous schools of Chaurjahri, Rukum. There are huge numbers of pregnant women who repeatedly suffer miscarriages but, because they think that they have been affected by the “Moch”, they do not go to hospital for checkups.

Because of this superstitious belief in the “Moch”, millions of women in Nepal are losing their children day by day. This has become one of the major health problems in Nepal. A consequence of the traditional belief in the “Moch” in Nepal is that many women suffer miscarriages repeatedly or their babies are still born. 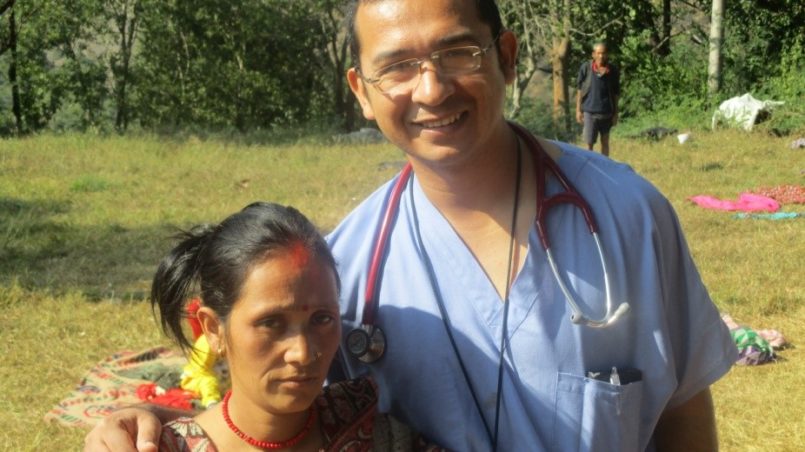