Jan-Werner Müller, born in Bad Honnef, Germany in 1970, is a German political researcher. He studied in Berlin, London, Oxford and Princeton, and since 2005 he has been teaching in Princeton.

At the beginning of the lecture, Müller points out that there is no manual on how to defeat populism and, if there were one, we would have to distrust it. In fact, one has to be prepared to face a long and possibly hard struggle to defeat populism.

Müller himself depicts a much narrower concept of the populism phenomenon, than many other people would propose. He considers it a political problem that the concept or the designation ‘populism’ tends to get overstretched in Europe, in particular today.

Not everyone who criticises elites is automatically a populist, in a democracy everyone has to have the right to criticise and should be questioning elites.

But how do populists critisise?

Populists always claim that they – and only they – are the representatives of what they refer to as ‘the real people’ or sometimes even ‘the silent majority’.

The issue concerns the rhetoric, because, although it might sound relatively harmless in the beginning, there are two dangerous consequences for democracy:

First of all populists say that their competitors for power are illegitimate because they – and only they – know the people’s will. This is, where they like to leave the substantial ground, where questions can be discussed in a democracy, and become personal: they put the character in question, they are posing a moral question.

Donald Trump really stretched this to the limits by what he said about his opponent. However, Trump was just an extreme in this respect, but not an exception.

Secondly – and not that obviously – populists say, that those citizens in the people itself, that are not sharing the concept of the true people, in a way don’t really belong.

Nigel Farage said on the evening of the Brexit referendum: “A victory for real people”, meaning nothing more than that the 48% who wanted to remain in the EU, were somehow not “real” and therefore did not belong to “the people” at all.

Norbert Hofer said after the first election for federal president: “Ja, Van der Bellen wurde gezählt, aber nicht gewählt” – “Yes, Van der Bellen was counted, but not elected”. By saying this he not only criticised the electoral system, but highlighted a discrepancy:

Between, here are the numbers, but on the other side, there is something, nearly metaphysically, some higher substance that is somehow out there, the true people and I, as a populist can evoke that, so to say.

Populists see themselves as the true representatives and then try to act out the people against the existing procedures and entities – this is typically populist, this is dangerous and this argument is ultimately not legitimate.

Once again the particularly moral concept of populist politics can be mentioned. Thus populists encourage the image of a homogeneous, innocent, usually hard working, fully unified people against an elite, who are of course, defined in the contrary terms: usually corrupt, usually not working, not serving the people and very often, not really belonging to the people at all.

Very often in right wing populism in particular, one sees the image of the elite combined with a further, so to speak “enemy” of the people, those who are at the very bottom of society, who of course, in the populist imagination, also do not work and do not really belong.

Müller sees the populists’ success in an intensifying conflict of our time. On the one hand there are people who wish to have a more open world – on the international level with more cultural but also more economic globalisation, or at the national level, more openness towards religious, ethnic, sexual minorities, etc. in their own country. And on the other hand there are those people who wish for more seclusion and closed societies.

The vital point in this conflict is that populists can say: “That is something where we as populists can contribute, because we practise policy people can identify with. We determine who belongs and who doesn’t belong.”

Müller points out that Facebook and Twitter allow something that one – quite ironically – could call direct representation. The people are tricked into believing that they are in immediate contact with the person and that there is no media interfering.

What they definitely do not want is something that interposes between the people and the supposedly true representatives: No complicated party system, but also no professional media, that do interfere and from the perspective of the populists, always falsify information.

And it is precisely here that the idea arises that I as a citizen, can directly – although this is of course an illusion – keep in touch with the “true representative”. This development has definitely been intensified via Facebook and Twitter. 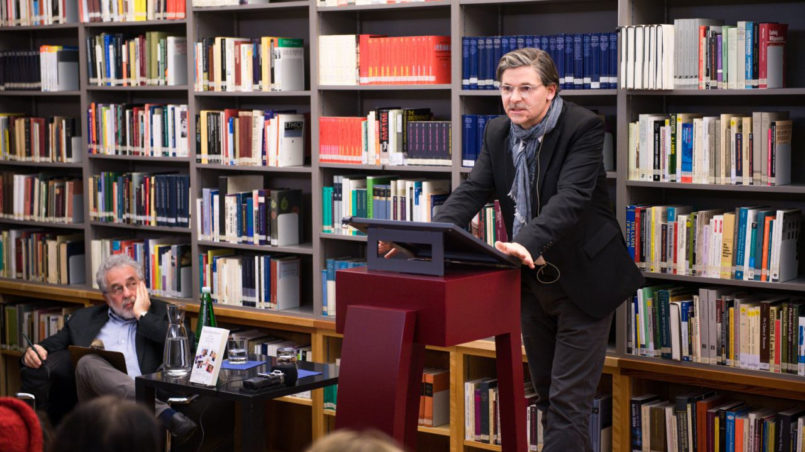 How to Defeat Populism

In the following Müller points out important steps to consider in dealing with populism.

This is basically something, which all of us can do. Distinguish more carefully between really dangerous populists and movements and parties that might make live in the EU difficult in certain ways but are not populist.

Absolute exclusion is no solution

Furthermore he points out, that an absolute exclusion in the sense of “we don’t sit with them on a podium, they are not invited to the talkshow, in parliament we are going to boycott them all right from the beginning” is only going to backfire.

Because, by doing so, one automatically confirms the narrative, the story, that populists always tell their supporters: “The elites don’t even listen, there are all those tabu topics that you’re not allowed to talk about etc. etc.”

But, talking to populists does not automatically mean talking like populists. So the fact, that you are engaged in a debate does not mean that you have to adapt to framing of problems, or suggestions about their causes.

Less obvious is possibly that, in that debate, you are able to talk about many issues. About immigration, about other solutions for the Euro-crisis, where you can not suddenly say: “No, that is absolutely undemocratic, if you represent this position.”

However if populists then mention a theory such as – in the German context – ‘Angela Merkel has a plan, to substitute the entire German population with Syrians’, as the AFD sometimes does, then it is very important that other politicians become really hard and confrontational and say: ‘Wait, something entirely different is happening, here we leave the territory of what can be discussed in a normal democratic debate, where one can argue over many different issues – absolutely legitimate. But if you now mention this, then wait, prove this or please stop it.’

Populists can govern as populists, which means, they can govern as antipluralists. That’s why nobody should be surprised if e.g. Orbán, Erdoğan, Kaczyński, if they have enough power, realise their populist basic claim to be the exclusive representative for the real people and therefore bully the opposition and therefore decrease media pluralism, etc.

But of course, this only works if they have the corresponding majority, it only works if there are no corresponding counterweights. So for once, you should not generalise and assume that if there’s a populist junior partner in a coalition you have to be prepared for the worst. That’s not what’s arising thereby.

But this liberal expectation that the problem is going to solve itself just by disenchantment, is what Müller considers wrong.

Questions from the audience

Does it need a charismatic leader?

It certainly helps to have a charismatic leader to be successful, but that’s true across the board in politics. I do not think that having a charismatic leader is really intrinsic to populism, what is intrinsic to populism is the claim, that there is only one popular will and that this can be successfully embodied by one person. This person does not necessarily have to be very charismatic just symbolically has to be able to say: ‘I truly represent the true people’s will’.

What can I do if I’m in a discussion with a populist in which he very obviously insists on the correctness of wrong facts?

If you come to realise that you can’t reach them, you should just change the subject. This can be frustrating, I know. But populists always already know the answer. That is typically populist. They doubt the result of an election if the outcome is not to their satisfaction. Hofer did that, Trump threatened to do so if he did not win.

You said, Populists don’t disenchant themselves, how can that be?

Hillary Clinton e.g. relied too much on the fact that her opponent was so obviously unfit. She just put him off and went deaf. She was convinced that the people simply had to realise how obviously unfit Trump was. But now, Trump is president-elect and he will be able to govern. And if he doesn’t feel the right headwind, he will do it antipluristically: reduce media pluralism, weaken checks and balances, etc.

Clinton would have had to show herself so much more as a better alternative, point out more what to expect from her if she was elected. As it was there just was not a fit alternative for the people. The disenchantment just did not happen.

Is “populist” a negative term? Because there are politicians claiming to be populists?

Furthermore the term is received in a different way in Europe – where I allow myself to argue that there is no really positive interpretation of the term populism – than in the US. In the USA the term is not as negatively perceived as it is here.