Under the title “Danube Cities against Human Trafficking”, a round table was organised on 24 November 2017 in the Vienna City Hall, focusing on combating and preventing human trafficking in Europe at a local level. The event was intended to facilitate the future coordination and cooperation between the institutions present. At the same time, awareness of this topic should also be promoted in society. 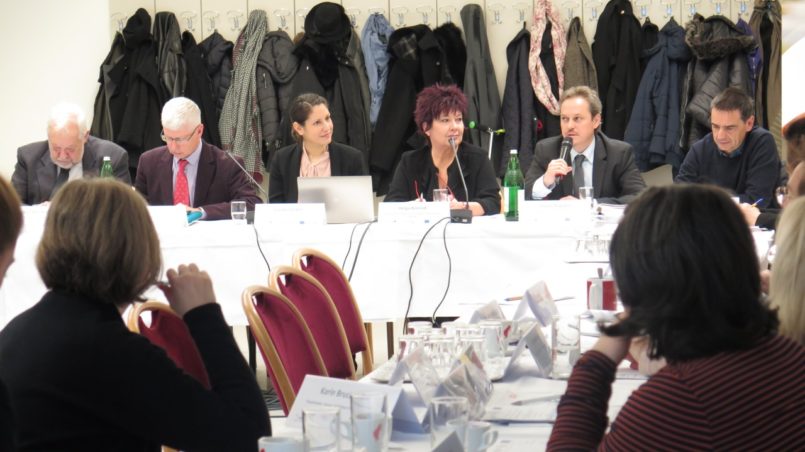 According to Helga Konrad, head of the Regional Implementation Initiative against Trafficking in Human Beings for the Institute for the Danube Region and Central Europe (IDM), the so-called migration and refugee crisis is currently employing the majority of people in Europe to such an extent that problems such as trafficking in human beings are simply being forgotten. Trafficking in human beings is the exploitation of helpless people in personal and economic hardship by criminal networks.

State institutions and governments, which actually have the responsibility to take action against it, are not even willing to acknowledge the problem itself. According to Konrad, we only hear governments constantly talking about national security rather than the safety of people.

At the moment, there are still too many governments and authorities which believe that they do not have to do anything about human trafficking – on the grounds that it is “only” about migrants who are affected by it, says Marc Van den Reeck of the non-governmental organisation The Smile of the Child. Incidents of human trafficking have already occurred throughout Europe. This is a much larger issue than the assumption that only migrants are affected. In his opinion, 80-85% of the victims of human trafficking are not migrants from Africa or the Middle East, but citizens from other European countries. There is inevitably a link between human trafficking and the so-called refugee or migration crisis but, according to Van den Reeck, the problem goes beyond this crisis.

In his presentation, Mike Dottridge, an independent expert and anti-trafficking advisor, cited the most common activities in which the victims of human trafficking people are later “employed”. From Dottridge’s point of view, the main activities are catering (restaurants and hotels), agriculture, building sites, forced begging, the cultivation and sale of cannabis and prostitution. Trafficked people are forced into precarious employment relationships and, as a result, become dependent on criminals.

According to Volpicelli, even though those affected are subject to legal proceedings, they receive neither economic nor moral compensation for their collaboration with the judiciary. Apparently, this fact applies everywhere. Instead, the victims are often even regarded as accomplices to a crime in court proceedings.

In addition to granting rights for victims of human trafficking at the legal level and an assumption of responsibility by governments, coordination and cooperation at the local level is particularly important, says Dottridge. Important factors here are the identification of situations in which people are trafficked and the earliest possible intervention.

It is essential for the parties involved to increase their awareness of such situations. Direct and active intervention, rather than simply neglecting or even ignoring the situation, is required. In order to tackle the problem effectively at a local level, multidisciplinary teams should be formed in which employees of social institutions, health services, schools, NGOs and the police work together. According to Dottridge, governments should also be required to keep an eye on the structures and machinery of criminal networks.

In order to encourage states to focus their attention on this problem, it is necessary to convince authorities capable of intervening in the trafficking of both adults and children. According to Van den Reeck, Europol’s announcement last year that 10,000 children are officially considered missing in Europe should make the problem of trafficking in adults and children in Europe clear to the state authorities. But from their point of view, however, state security, rather than human security, is still the first priority.

Van den Reeck stated that, in order to raise public awareness of the tragic reality of human trafficking, the media in particular could play an important role by highlighting this reality and encouraging action, while the individual should address it as a topic within his/her circle of acquaintances.

The existence of human trafficking within an “advanced” society could be seen as a backward trend. Or isn’t it rather a realization of a problem that has been overlooked up to now?