I tried to understand what he was trying to tell me. I wanted him to tell me more. He was born in a refugee camp. I was having this serious conversation with a Palestinian guy, when the bus screeched to a halt. And we could hear the coordinator shouting “yalla yalla”. It is a common expression in Arabic meaning, “come on”, “let’s get going” or “hurry up”. To be honest, by the time the trip was drawing to an end, we could no longer hear these two words “yalla yalla”. Because whenever we would start to enjoy a place, we would hear the coordinators shouting the words, “yalla yalla; time to leave”.

He was so engrossed in expressing his feelings and his experiences of his time in a refugee camp. I was so absorbed in listening, trying to comprehend and imagine, when the words “yalla yalla” interrupted us once again. He stopped speaking and looked out of the window and said, “See it for yourself”. 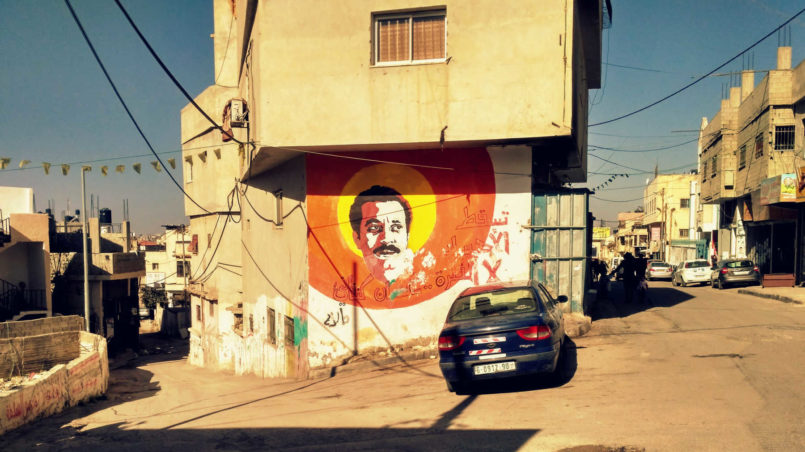 We stepped out of the bus. We were in the Al-Jalazone refugee camp. It is seven kilometers from Ramallah. Our coordinator gave us some instructions regarding what to do and what not to do.

We were asked not to do anything that might hurt the sensitivity of the people of the refugee camp. I was not sure what the coordinator was talking about.

We were also instructed not to leave the group at any time, as refugee camps are like a maze where you could easily get lost. It could be really difficult for someone who gets lost to locate his or her group because of the language barrier.

I started to walk around, taking photos of the walls full of graffiti, of billboards, of narrow alleys and everything that attracted my attention. The walls were painted with pictures and full of posters of martyrs: those killed by the Israeli Defense Forces (IDF), those killed during demonstrations and confrontations with Israeli soldiers, and those who chose death over life to liberate their land. The faces of martyrs were accompanied by a short paragraph, describing their age, the date when they left the world and the circumstances under which they became martyrs.

The paintings and posters of the dead on each and every wall were a little disturbing for me. I started to think about how the families of these dead people  feel when they have to see the pictures of their dead everywhere and every single day. It was like forcing them to re-experience the pain and distress they once went through. I wondered if they really want their pain to melt away. Do they really want their wounds to be healed? I think they do not want that.

We usually want to be released from the clutches of pain and suffering. But when suffering has become mundane, an undeniable reality, I think pain gives us the strength to deal with the suffering that waits outside our door every single day. It is pain that reminds them of the loss they suffer, of the injustice meted out to them, of the struggles that await them, of the need to carry on, of the need to jump once more into the fray, of the need to never give up.

What else could be the reaon for painting graffiti of martyrs and pasting their posters all over the walls, on billboards and over everything possible? It is not just to remember their dead loved ones. It is to strengthen their resilience even in the face of death.

I believe that one of the first things that comes in our minds when we think of a refugee camp is that it would be overpopulated. Crowded streets and neighborhoods. I had the same expectation and image in my mind when I was travelling to Al-Jalazone refugee camp. But to my surprise, the roads were completely deserted. We could see the shop keepers inside their shops and a few locals. It was completely unexpected. I could not understand how this was possible.

Was it intentional or just a coincidence that all residents choose to remain indoors? We were an international delegation visiting a refugee camp. Would this not be a perfect opportunity that could be used to convey to the world the pent up frustrations and suffering that has continued unabated in Palestinian refugee camps? Was I wrong in thinking that we can be their messenger? Were they completely disappointed with the international community and did they expect nothing from us? Were they tired of playing the victim and being viewed as the archetype of suffering? Or was politics involved here as well? Was it the politics of the Palestinian Authority? I failed to understand how a refugee camp could be so deserted in the middle of the day.

I realized that first-hand experience is quite different from any understanding achieved by reading about a refugee camp and the situations that plague such camps. While walking around the alleys of the refugee camp, we were told that refugee camps still have severe power cut issues. Residents have to do without electricity for several hours every day. There are times when there is no electricity for many days in a row. Other similar problems persist and plague these places.

Something that really unnerved me were the stories of the IDF raids at night in refugee camps.

IDF soldiers would barge into houses at night; drag out young men from their houses, beat them and then take them away to detention centers.

We were told that IDF raids are so common and routine in the refugee camps that refugee residents would joke around that something has gone wrong and not normal if the IDF soldiers have been absent for more than two or three days.

The Palestinian guy, who had been telling me about his everyday experiences in a refugee camp, told me that, because of such raids and random detentions, the education of Palestinian youths in the refugee camps suffers greatly.

He narrated his own story and told us that he himself could not complete his studies on time because he was dragged out of his house on many occasions (during his exam days) and beaten and then left battered by the IDF soldiers. He told us that he had spent months in hospital, because of which he could often not sit his exams.

Refugee camps are very vulnerable and there is no security. Your family is not safe, especially the young boys and the men in the family. They can be picked up and detained for years by the IDF, and there is nothing we can do. No system of law to protect us.

I felt so perplexed with the unusual concoction of emotions that stirred up within me when I was touring around different cities and places in West Bank. I was so happy to be there. It was my dream. But the stories of suffering and pain, of tragedy and atrocities, left their mark within me. All my happy moments were laden with heart-rending feelings as well. I felt like a huge box of paradoxes.

We saw some kids looking at us with curiosity. They were quietly following our group, anxious to know why we were there. We had brought some chocolates for them. To our utter surprise, when we offered them those chocolates, they refused to accept them. We persisted in our request but those kids never took our chocolates. Then one of our Palestinian friends told us that these kids are too proud to accept those chocolates. They have seen enough even at this age. Some kids even refused to pose for photographs. I realized that kids in refugee camps grow up under very harsh conditions which really change their outlook.