The materials for distribution were ready. The place was also already decided. The only problem was how to transport the materials to the distribution points which were a considerable distance from the Chaurjahari Valley.

(From: A Tiny Attempt)

The monsoon season was at its peak and the weather was very unpredictable. The volume of water in the rivers and streams was increasing. My thoughts centred on how I could send the hygiene kits to a place which was two days away. It was so challenging and risky for me. For some time I considered cancelling the program.

But, later again I thought “A stitch in time saves nine“. I had to do it at any cost. I had to do it for the people who needed these kits in time. I decided that challenges are the charms of our lives. We would not be able to taste the sweetness of our successes if there were no challenges in our lives. I also believe that bravery only exists among those whose work is difficult. After all, where there is a will, there is a way. And with these thoughts running through my head, I worked on my plan to send the materials.

Initially, I had to look for three reliable porters to carry the kits. I met some porters, but they were not prepared to go so far. It was not easy to persuade them to embark on the two-day journey but finally they agreed. However, they demanded more money – for each porter Nrs. 2,000 (approx. $20) per day to transport the materials. I told them that was too expensive and ultimately we agreed upon Nrs. 1,500 (approx 15$) per day. They took two days to transport the materials to the Sakla ward of the Bareakot community. Upon arrival they took the kits to my uncle (Gobinda Singh), who kept them safely.

Later, I called my uncle via cell phone and told him about my plan to distribute the kits to the targeted people. I asked him to fix one date and to organize one small interaction program. I told him that he should invite all the important people in the ward in writing and that he should also explain the program in detail to them. I also suggested that he organize some snacks as a refreshment for all those involved.

I explained that teenage school girls who are very poor and at their menstruating age are the target group for hygiene kits. My proposal was that he should invite three very poor menstruating girls from five different government schools and that they should receive a hygiene kit. I told him that he would have to explain to them about how to use the kits in their daily life, because the sanitary pads within the hygiene kits were reusable. Further, I also requested that he provide a filter to each of the five different schools which the teenage girls attended.

Finally, on 24th June, the kits were distributed to 15 teenage girls from five different schools by the chief of the ward, Man Bahadur Singh. The schools were also provided with filters.

The school teachers who had come to receive filters were requested to keep the filter in the school so that the pupils could use those filters to drink purified water. In the same program, the teachers were taught to install the filter. They were also informed to clean the filter candles once a week.

The interaction program was attended by different groups of people, such as the chief of the ward, representatives from political parties, the head of a mothers’ group, and health representatives, Female Community Health Volunteers (F.C.H.V’s). My uncle told me that the participants were very happy to receive the kits and that the school teachers said that it was the first time that their school had been provided with a filter.

The chief of the ward was also happy with our work and asked us to continue providing such aids, especially in such remote areas. Finally, in a very happy and joyous atmosphere, the kits were distributed and the program was conducted successfully, which gave me a real feeling of satisfaction. 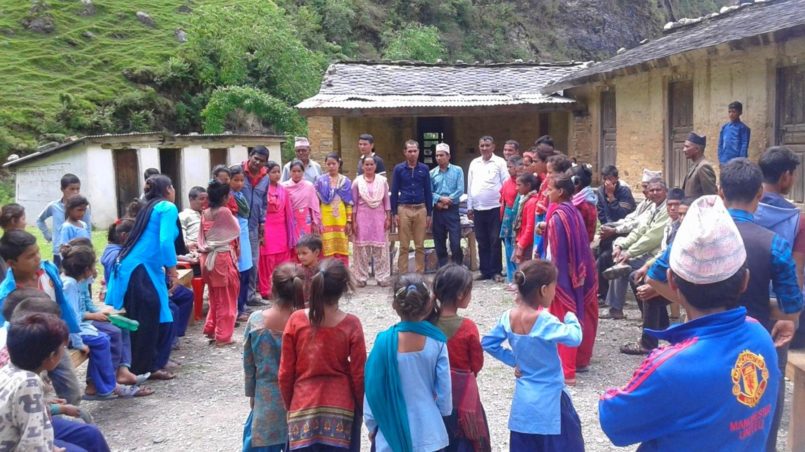 Now, you might be asking yourself why I have written about such negligible work because people in the world are doing such great jobs which are beyond our imagination and expectations. I know our work is nothing compared to them; it’s just negligible.

If everyone truly wanted to help, I am sure that, one day, the world would be a happy and better place. It’s true that nobody can grow at once. Everybody has to step on each rung of a ladder to reach the top floor. I think all those great people and organizations may have their own stories of small and negligible work. Miracles only happen either in circuses or stories. In reality, we need to work hard to do great work.

In other words, a small deed can be the beginning of something great. We should always try to develop ourselves and to become greater. Dreams may not come true by the effort of a small unit. For this we will likely need the world together with us. So, let’s help others and be helped ourselves.