In October 2013 China’s President Xi Jinping presented the new Vision ‘One belt, one road’: an unprecedented and far-reaching project for the coming decades, which will change more than only the Chinese world. It is an advancement of initiatives of Deng Xiaoping, who led China out of its insulation in the eighties. OBOR has two thrusts: the connection from China to Europe by land (silk road economic belt) and the maritime conquest of the Pacific and the Indian Ocean via the strengthening of economic power (maritime silk road), with integration of East Africa. To reach this end, China invests a lot of money. Experts speak of 2.5 to 8 trillion dollars. In Pakistan alone, $46 billion will be invested in the China-Pakistan economic corridor. In Nicaragua, with Chinese aid, a channel will be built to compete with Panama. At the same time Cuba receives generous funding from Beijing for the expansion of their port. Other major port projects can be found in Kenya, Greece (Piraeus is the maritime end of the New Silk Road) and Croatia. Also, in Thailand a channel is in planning, to make maritime trade less dependent on the Strait of Malacca. 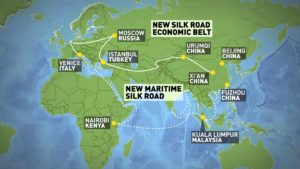 The land way has several possible routes (which are not necessarily mutually exclusive): the two most probable ones lead through Iran and the Middle East, respectively via Central Asia and Russia. Central Asia’s infrastructure is well developed and hosts a significant amount of resources. It is not without reason, that all regional and international powers are trying to gain influence there. China has already taken leadership here via the Shanghai Cooperation Organization, as well as in many parts of Africa. In Eastern Europe, China launched cooperation on the 16 + 1 summit.

The Trans-Asian Railway Network, an idea of the UN from the 1950s, has received considerable attention again because of China’s ambitious plans. Meanwhile cargo transports from Hamburg to Beijing take no more than fifteen days. When completed, the ride will take ten days. A ship used to require about twice the time for the same haul, including stops.

The maritime strategy focuses mainly on the expansion of Asian ports (summarized in the String of Pearls strategy) and on the development of its own blue-water Navy: a fleet capable of operating across oceans and including air combat forces. The Pacific and the Indian Ocean are the decisive oceans of the 21st century, including their connections to each other and to other bodies of water. The main focus is on the South China Sea, considered by military experts to be one of the major hotspots for armed conflict in the upcoming decades. China claims 90 percent of this strategically central sea and is therefore in conflict with many neighboring states, and in the long term also with the US. For China this sea is the gateway to the world. Were it to be controlled by a foreign power, both the flow of resources and the seaborne trade would be interrupted. Since as of now 90% of all goods worldwide are transported by sea, such a restriction would be lethal for China. A look at all the island nations from Japan to Malaysia reveals that most of them are pro-American or even American allies. When including the American forces in Central Asia into the consideration, it is understandable that China (like Russia) feels encircled.

Also on the inside, the Initiative brings important new impulses. The economically weak central and western provinces are to be connected to the booming east. A university education with critical abilities and research systems is to make the country less dependent on foreign (mainly Russian) technology. The technological and military-industrial complex is to be massively expanded. These are all prerequisites for the economic, but also for the military rise of the vast empire, which consists of 27.3% desert – with China losing about 2,500 square kilometers of fertile soil annually to them. This is counteracted with extensive reforestation programs, such as the Green Wall which has been ongoing since 1970 and is now again being intensified.

In all of this one must not lose sight of the internal conflicts of China. The fight against corruption, which Xi Jinping committed himself to, will be a long time. The many different peoples are difficult to control. The historically based fear of the Chinese leadership that the country might fall apart because of its ethnic inhomogeneity, explains why China always responded very toughly in the case of Tibet or the Uyghur uprisings. Using various programs, resettling Han Chinese originating from the West into the conflict regions, Beijing hopes to solve the problem long term. The economic differences represent a great potential for conflict, as well: the middle class is still relatively small, to this day the majority of Chinese live in very modest circumstances. Should it come to supply bottlenecks resulting from the dependence on food imports (Vietnam is the largest rice supplier, conflicts between the two countries over the South China Sea or over economic issues have been increasing over the last few years), riots may quickly arise here as well – see Egypt in the Arab Spring.

The second part of the report will focus on the Asian Infrastructure Investment Bank, the Chinese navy and geostrategic fundamentals.