A daring ascent to Mount Doom

On July 25, the big day had finally arrived – a tour of the volcano “Pico del Teide” was scheduled. With a height of 3,718 meters, it is not only the highest mountain in Spain, but also one of the highest island volcanoes in the world. The area around the volcano has been declared a national park, counting among the UNESCO World Heritage Sites since 2007. In 1909, the volcano had its latest eruption and is a popular destination on Tenerife. At 2,356 meters there is a plateau, from which the cable car Teleférico makes the ascent of the mountain a lot easier for visitors.

After breakfast, we packed our backpacks and organized a car to drive right up to the cable car station. From there, we were intent on hiking a trail, rather than taking the cable car. During the drive, we were already delighted by the vegetation and the lava rock.

Somewhat shocking to us, was the security of the roads – namely none! In some parts, left and right of the road there was just a steep slope ending in a stony ditch. Once arrived at the vast plateau, I found the view simply amazing – so much rock and boulders and hardened lava … truly fantastic! After a short time we could already see the cable car station only to find: it was pandemonium! So many people wanted to take the cable car to the “Pico del Teide”. 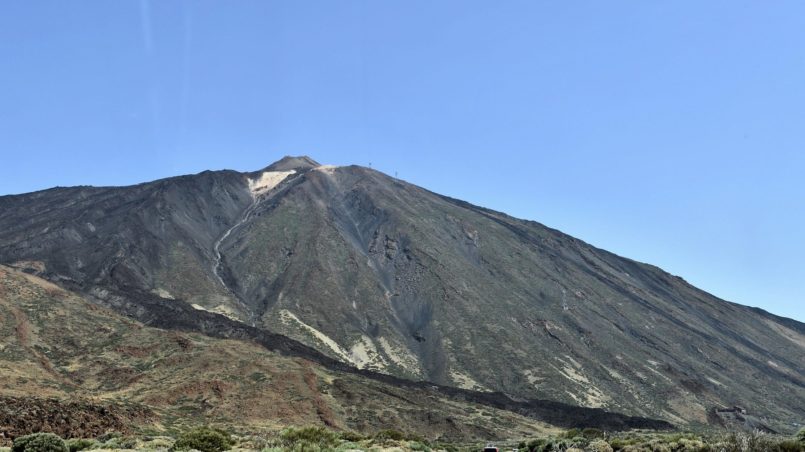 Good thing, we were set up to hike at any rate. This however, turned out to be a problem, since there was no trail starting near the cable car (which is where we parked the car). Without much ado, we decided on an uncertain adventure: namely, to take the shortest route directly uphill – beeline, pretty much. Four of us – three friends and myself – made the climb from the carpark, up the slope a few hundred meters away from the cable car. Our equipment was gallons of water, two bags of biscuits (our “Lembasbread” – further down you’ll read, how the name came about ), sunscreen and, in my case, of course the camera.

The start of our adventure took us through bushes, boulders, stones and sand. It was extremely laborious to move forward – for every two steps forward we slid one step back. Carefully I looked out for animals, but the volcano seemed dead. Now and then we heard a rustle of lizards in the undergrowth and spotted a few spiders waiting for prey, yet in vain – I could not even see any insects.

It took about an hour to get to the level of the cable car’s first pillar. From that point on, we could almost continuously climb on the solidified lava. The rugged rock was great for climbing – but also very sharp, and so we ended up with quite a few scratches and abrasions! We  kept taking short breaks to drink and rest – they sure were needed, too! We sat there on the rock nibbling our biscuits for energy, which we came to lovingly refer to as “Lembasbrot” – for this is pretty much how we felt: like Frodo and his companions on the climb to Mount Doom (from the movie “Lord of the Rings”). All throughout our ascent we were climbing in the blazing heat. But one thing was clear: There was no way back. While the way up sure was hard and exhausting – and to be honest, we could not assess what else to expect – moving downhill through rock, gravel and sand however, could only end with uncontrolled sliding and injury.

So we kept climbing on in a landscape that, more than anything, reminded me of the film “The Hills Have Eyes” – a horror flick, in case you did not know ;). After about three hours of climbing (with still no end in sight) I had a minor motivation low, getting upset at this moronic idea the four of us had given birth to. But then we were finally high enough to see the cable car station on the mountain!

With our goal in sight, we each summed up every last bit of our strength and – driven by an enormous motivation boost – climbed up the last of the lava rocks. We even called out to one another: “Won’t they be amazed up there, when they see us ascend!”, smiling at the thought.

Well, the amazement was mainly on the security personnel’s part, but not in a good way … Overjoyed and very proud of ourselves, we climbed over the railing, and found three security men already waiting for us, demanding to see our passports and threatening to call the police. The men told us that it is forbidden to move outside the marked paths in a national park, and that we would be fined an administrative penalty. This of course, we had absolutely not taken into consideration … We apologized profusely for it, and could at least keep the men from calling the police – if nothing else, we’d certainly had our share of adventure. 😉

After a short breather and assessment of our broken shoes – yes, the rock was really sharp – we decided to still take the last 200 meters to the summit of the “Pico del Teide” upon us. This trail – yes, an official one – could only be taken with a permit – which, exemplary as we were, of course we had. 😉

Despite our thighs screaming fire, we motivated each other to cover the last steep meters. A great feeling it was, when we finally got to the top.

We were sweaty, panting, dirty and scraped and I could not hold back my cry of joy. The other people present gave us somewhat sceptical looks, wondering why we were so destroyed after the short climb from the cable car station – which, in turn, gave us big smirks. If only they knew …;)

Here are some pictures of the volcanic crater: