Whatever knowledge I had gathered about Palestine and Palestinians from books, the media, seminars and conferences I had attended regarding the Palestinian struggle had led to the forming of a particular perception about the people in my mind. And so, whenever I imagined or thought about Palestine and Palestinians, a gloomy picture used to appear in my mind. A land devastated by a protracted conflict. Its people exhausted but still struggling in every possible way. Grim but resolute faces with weary bodies.

I imagined Palestinian life as full of drudgery and wretchedness. Six decades of conflict and life under occupation were enough to make me think and believe that Palestinians would be left with hardly any enthusiasm and appetite for enjoyment. It was naïve of me to think like that. I agree. But my perception about Palestinians and their lives under occupation couldn’t get better than that.

I reached Palestine, I met the Palestinians and I was totally flabbergasted.

I felt I was not only naïve but also half-witted to imagine Palestinians without any joy and enthusiasm for merrymaking. They were completely contrary to what I had imagined them to be. And I can truly say that I was not only impressed with their youthful exuberance, but also felt very happy for them.

The organizers of the youth camp arranged a cultural night for the participants of the youth camp. It was the second day in the camp and until then I had had no idea about the exuberant attitude of Palestinians. The venue was a small open lawn in one of the UN centers in Jericho.

We reached the venue after having our dinner at the camp. Initially, we were happy to know that we would be listening to some Palestinian songs and watch some Palestinian folk dances. We had no idea what was in store for us. Since most of the seats were taken, I and a few friends decided to sit on the lush green grass of the lawn. A person dressed in a suit came forward and was introduced to us by the coordinator of the camp as some local but popular Palestinian singer. He started to sing a Palestinian song, while a few others played traditional musical instruments. We gradually started to enjoy ourselves. The Palestinian participants and many members of the organizing committee started to sing along with the singer. Since we had no knowledge of Arabic, we could just watch them enjoying the music. 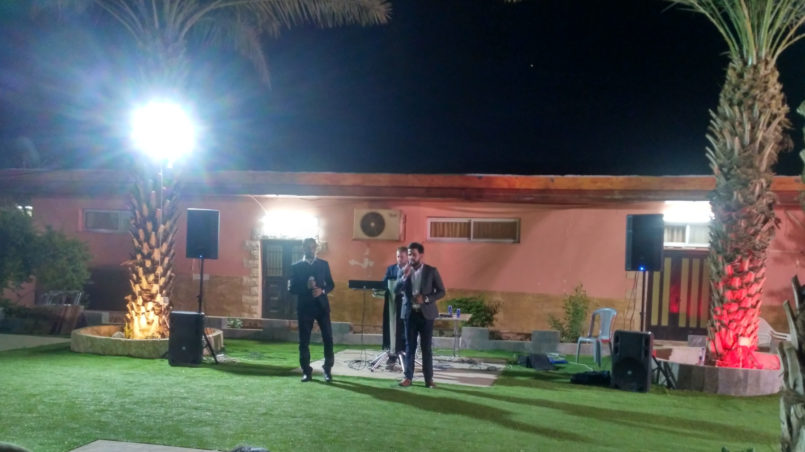 After half an hour, some young Palestinains dressed in traditional Palestinian attire came out from behind the stage and started to dance. The singer was still singing. I got to know that they were performing “dabke”. 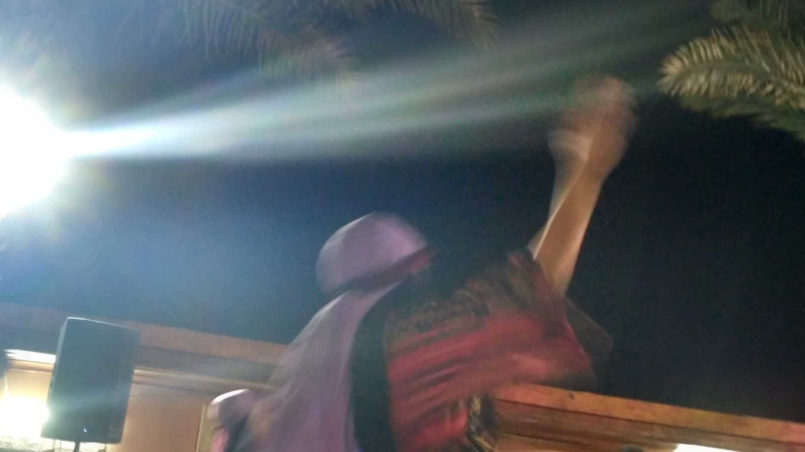 Dabke is an Arabic folk dance and it originated in the Levant. It was danced by people from villages and towns in the Lebanon, Jordan, Syria, Palestine, Iraq as well as by Bedouin tribes who lived near the Levant area. It is usually performed at weddings and during ceremonies. 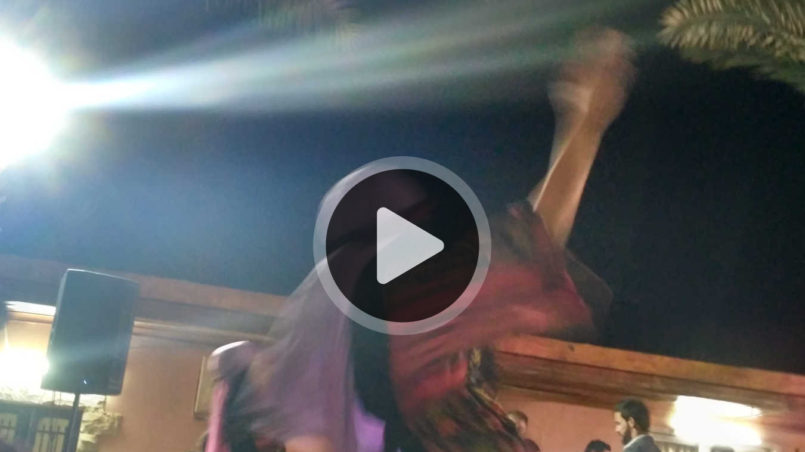 Dabke is very similar to tap dancing and can also be compared to stomping. It combines both circular dance and line dance. I got to know from one of my Palestinian friends that there are different variants of dabke. Amongst Palestinians two forms of dabke are popular – ‘shamaliyya’ and ‘sha’rawiyya’; while in Jordan there are as many as nineteen variants of the dabke. Each type of dabke has its corresponding set of songs. The themes of the songs which are sung specifically for dabke are usually based on love.

I was watching the dancers very keenly. It was like experiencing the flavor of Palestinian culture. After a few minutes, some Palestinian participants of the youth camp went forward to the stage where the dancers were performing the dabke, and started to dance. It was unexpected.

And within a few minutes, all the Palestinian participants went on the stage and started to dance. It was fun to watch them dancing, clapping and singing along with the singer. It was no longer a formal presentation of Palestinian music. Everyone looked so happy and full of life.

And so it didn’t take us more than a few minutes to join them. We couldn’t sit back and watch them enjoying themselves. In fact everyone present in that place started to dance. We learnt some steps of dabke and started to dance along with the Palestinians. I realized that we were all sweating within a few minutes as the dabke has complex steps and also makes you jump and tap your feet in different ways.

We held each other’s hands and followed the steps of the person beside us. I never thought Palestinian music and dance would be so much of fun.

When I felt exhausted dancing, I left the place where everyone was dancing, and took a seat to rest. Some Palestinian friends asked me to join them for Sheesha. Sheesha is a multi-stemmed instrument for vaporizing and smoking flavored tobacco. The smoke gets passed through a water basin before one inhales it. It seemed to me that sheesha is very popular amongst Palestinians.

I observed that everyone was having so much of fun there. The place was reverberating with life and ebullience. I could only gaze at them with wonderment and admiration. Numerous questions started to cross my mind: is this the Palestine I read about in books? Are these the same people whom I imagined to be engulfed in drudgery and wretchedness? Yes, they are the same people. Their lives are full of distress, anxiety, oppression, fear and the ensuing struggle. But their zeal and enthusiasm to enjoy life, after all the suffering and disappointments they face on a regular basis, was astounding.

I was so curious to understand such an attitude towards life. I was amazed to see their exuberance after all that happens to them on a regular basis. Finally, a really young Palestinian guy explained to me how they manage to look so happy. He told me,

We can’t stop living just because there are some people harassing us everywhere and every time. Our enthusiasm and appetite for life after all the suffering and hardship makes the Israelis crazy. Our ability to enjoy life and remain happy is intimidating for the Israeli authorities. They can try to make our lives difficult, they can inflict pain on us, but they cannot meddle with the way we look at life.

Whatever he said was true. The Palestinians haven’t stopped living because they are under occupation and because they are tortured in every possible way by the Israeli authorities. I learnt a very important lesson that day.

It was not only that day that the Palestinians were singing and dancing. I found them enjoying themselves and having fun every single day. They would play loud music in the bus and prod everyone to dance and sing. They would sing and dance very often. Many a times, after dinner they would start dancing. Their zest for life was unfamiliar to me. They have been fighting every single day of their lives. But the fight, the struggle and the loss they experience so often couldn’t dampen their passion for life and their spirit.

I went to Palestine with a particular perception in my mind. I came back with a completely different realization. There is much we can learn from the Palestinians.