Today an intense sightseeing programme awaits me. Initially we take a cab and drive to the east side of Delhi where we visit the Lotus temple, which is a Bahá’í House of Worship. This temple is located away from the chaos of the city, situated in a peaceful garden. The area around it is beautiful and it almost feels like being in Sydney, Australia, due to its strong resemblance with the Sydney Opera House.

Once we enter the temple, the main thing is to remain completely silent and to just enjoy the peaceful surroundings (the lotus flower symbolizes peace itself) and this is what we do. When we leave, there are some followers of the Bahá’í religion outside handing out flyers and explaining their beliefs to us. Since I wasn’t even aware that such a religion existed I listen carefully.

Bahá’í is a monotheistic religion, which stresses the spiritual unity of all humans. It is based on three principles:

According to the teachings, the purpose of life on earth is to know and love God through prayers, reflection and by serving humanity.

Moreover the temple is open to everyone, regardless of race or religion and every religion can be read or chanted inside the temple (inside your heart).

After we leave this temple, we walk towards another temple, the so-called ISKCON temple. Actually the name ISKCON means “the International Society for Krishna Consciousness”. Krishna is also known as the “God of Love” and is the humanized form of one of the main Hindu Gods – Vishnu.

There are three main Hindu Gods: Shiva (the destroyer), Brama (the creator) and Vishnu (the organizer). 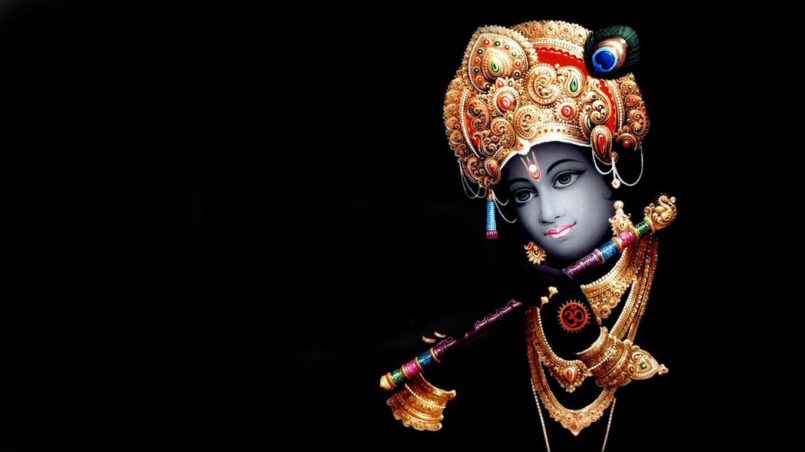 When we enter, we see many people wearing orange clothes, with shaven heads and a lock of hair left on top of the shaven head (shikha). This special “hair-style” signifies a focus on a spiritual goal (ekanta), an indication of cleanliness and the devotion to God by performing a personal sacrifice.

Traditionally all Hindus were required to wear a sikha but now it is mostly seen on temple priests or devotees (strong believers). 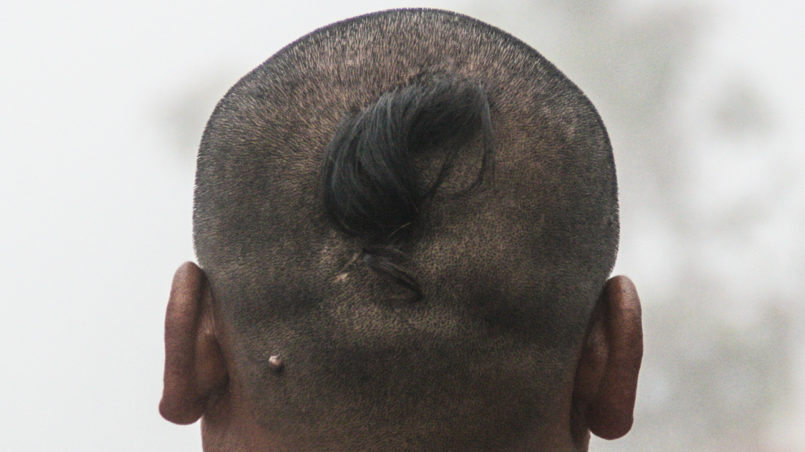 Once we are inside the temple, very loud music is played, many people sit together on the floor and play different instruments, others are dancing and chanting “Hare Krishna” (prayer towards Krishna God but devotees use it also as a greeting).

I am very surprised by everything what is happening around me and just need to sit down for a moment and observe.

To me it seems that everyone is in a kind of trance – immersed in happiness and love. Even though I still can’t quite understand everything that is going on around me, the longer I observe them, the more I can feel that they are very much at peace with themselves, spreading good energy and enjoying what they are doing.

Since I don’t know anything about this movement, I go to one devotee and ask him to explain a little to me. The religious organisation was founded in 1966 by His Divine Grace A.C. Bhaktivedanta Swami Prabhtupada in New York and is also known as the Hare Krishna movement. It belongs to a monotheistic tradition within the Hindu culture.

It is based on a 5,000-year-old Sanskrit script and the followers live according to the “7 purposes of ISCKON”. Besides worshipping Krishna, devotees also do many things for the good of society. They started the world’s largest food relief programme, work in prisons where they offer spiritual guidance and counselling to inmates and many many more things.

When I leave the temple, I must say that there is probably still much more to learn about ISKCON people but for now I can say this:

I really like their spirit, spreading of Love and what they do for society. They might seem “different or odd” to many people but they make a change in this world and do Good. 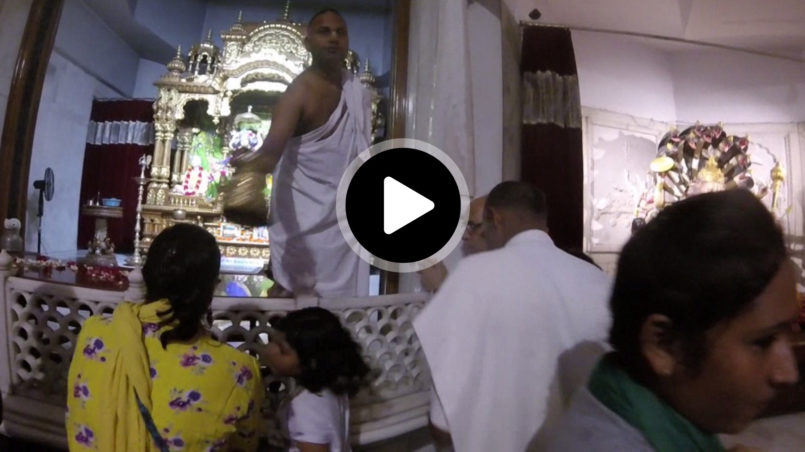 On the way towards the hotel, I see a large group of people dressed in orange clothes, wearing no shoes, some are carrying nothing other than a wooden, colourfully decorated stick on their shoulders while others are walking empty-handed.

They are Hindu pilgrims, walking more then 300 km, on their way or coming back from the holy river Ganges which begins from the Himalayas and ends in the sea.

Hindu people consider this water very sacred, taking a bath or drinking its water purifies the soul and helps to achieve Nirvana (state of perfect peace and happiness). Those who carry the wooden stick are carrying the sacred water from the Ganges River and going back to their homes.

Two water containers hang at both ends of the stick and all the way it is not allowed to put the stick on the ground since then it would no longer be useful as an offering to the God. If the stick touched the ground, this would mean that the pilgrims would have to travel all the way back to the river to get new water.

Therefore, at night, they place it on various metal bars.

Most pilgrims start from the temple closest to their house and walk for over 20 days. Along the way, there are various resting places, which were constructed by the government, where the pilgrims can eat, drink and sleep for free. Medical facilities are also accessible to them since many of them injure their feet while walking barefoot on the asphalt.

We pass by one of these resting places and I see many people, some are resting, others eating, dancing and listening to very loud holy music; everyone is really happy and enjoying themselves. Even though it is a religious event, it seems more like a big marathon or a big festival to me. 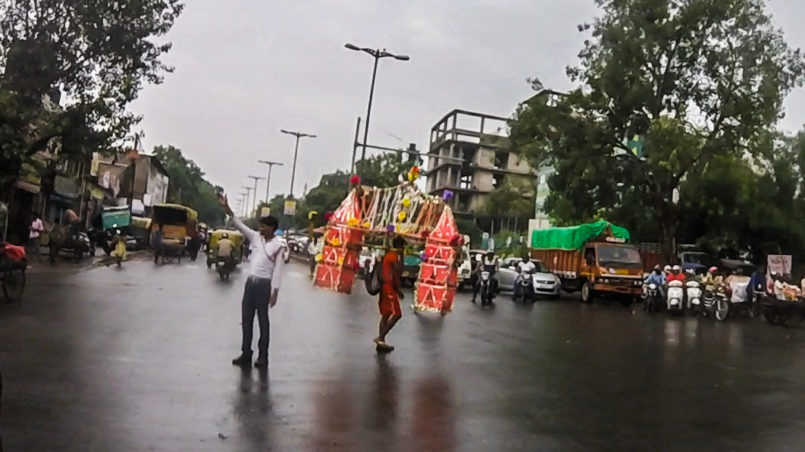 Just as we arrive near my hotel, in the Main Bazaar, a large crowd of people in front of us block the way. Huge trucks playing loud music are passing through the narrow streets. Some people suddenly start dancing, first only a few and then always more start to join. It’s the pilgrims again, those that we saw earlier.

As they have so many kilometres ahead of them, some hire a truck to go to the holy river but they need to come back home barefoot. It is really stunning to witness something like this.

It reminds me more of a rave party than a religious festival since I am simply not used to this because, in my religion, festivals are somehow celebrated in a completely different way. 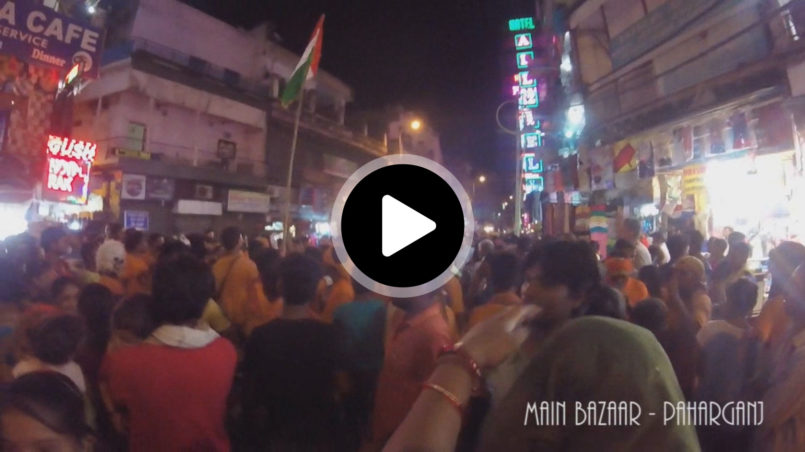 Happy, I return to my hotel room and am already excited about what I will witness tomorrow.