In the first part about the New Silk Road its dual concept was presented. This time it is all about theoretical and practical requirements for this project.

In China’s ambitious plans, the Asian Infrastructure Investment Bank (AIIB), founded in 2014, plays a central role. In short, the bank is meant to act as a counterbalance to the western / US-dominated World Bank. At 27% China holds the largest share, followed by India, Russia and Germany (4.1%). A total of 57 countries are involved directly or indirectly, including a surprising number of European countries (including Austria). Given the demographic development in Asia (the population along the line Bosphorus-Borneo will be the world’s fastest growing over the next few decades, followed by Africa) and the forecast that China’s GDP in 2050 will be about as big as the EU’s and the United States’ combined, the seemingly hasty willingness of Europeans to join the AIIB is understandable. Another twenty countries are currently in the accession process – the attraction of this alternative project has obviously not yet reached its peak. For developing countries, one of the reasons to contact the AIIB is the negative experience with World Bank projects and the paternalism associated.

What is referred to as geostrategy, are far-reaching deliberations on how a country can gain a power base with the long term goal to dominate the world. Two theories in this category are of importance for the current consideration. They stem from the golden age of geostrategy at the beginning of the 20th century

In many of their speeches, Chinese politicians strategically cite on the Heartland-Theory, developed by British geographer Halford Mackinder in 1904. It states that globally, Eurasia is the crucial landmass for future developments. Apart from the US and Brazil, all key economic and military powers are located on this landmass. Whover controls it, controls the world – unless they have a significant head start, as the USA currently does.

Contrasting this theory is that of the Dutch-American geo-strategists Nicholas Spykman – interestingly, a student of Mackinder’s. He positions the Rimlands front and center to the efforts to obtain geostrategic power. Two thirds of the earth’s surface are covered by water. The coastal regions of these large bodies of water are crucial for economic and military influence. Whoever controls them, also dominates the hinterlands. These are the considerations followed by American strategists since the Second World War. They are also used as a counterweight to China.

The term sea power describes the ability to move freely and unobstructed at sea, with both civilian and military ships. This goal lies in the distant future for China – but given the economic dependence on sea routes, it has been awarded highest priority. Currently, the vast empire has all but one (obsolete) aircraft carrier – much too little, if (as already mentioned) one aspires to build a blue water navy. Efforts in this sector have been going on for several years though.

The United States maintain electronically controlled fleet combat units (called CSG‘s) around their ten aircraft carriers, three of them within striking distance of China (India, Japan, US West Coast). To catch up here, great efforts in technology must be made to become independent of Russian technology and gain on the Americans. To achieve the goal of having the most powerful  Navy (after the US) in the world, the Dual Command System also needs to be reconsidered: so far,  a member of the military must always confer and make decisions together with a party cadre.

To be able to break through the first ring of islands around China and the South China Sea – touched upon in the first part of the article –  long term, China holds regular fleet exercises which are closely watched by their neighbors, most of all Japan. In this context, the conflicts between these two countries over uninhabitable islands, which made the news several times in recent years, can be explained. 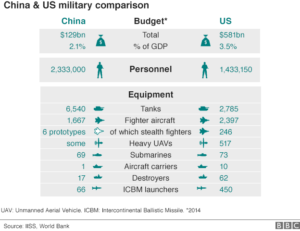 In the last part I will broach the topic of the US’s and other regional and international powers’ reactions caused by China’s new geostrategic orientation.