Some places seem to sit at the top of our “to visit” list. I feel our profound desire to visit those places stems from our familiarity with them. Usually these places are those which we have heard about for a very long time. In fact, maybe we grew up listening to and reading stories where these places were mentioned. We have grown up imagining them, giving them shape and molding them with any new information or idea that we draw from biblical stories, stories of conquest, stories of prophets, etc.

Bethlehem is one of those places. The name “Bethlehem” always seemed so familiar. I heard about it so often when I was a child. It was there in stories I heard about Jesus Christ. It is the city believed to be the birthplace of Jesus.

So when I was told that I would be going Palestine, Bethlehem instantly climbed to the top of my “to visit” list and occupied a place just below “Jerusalem”. Yes, the allure and magnetism of Jerusalem is undisputable. It has always occupied the topmost position. However, Bethlehem, the birthplace of Jesus, was equally able to entice my imagination.

When I read the itinerary for the youth camp for the first time, I was really glad to see the name Bethlehem on the list. One whole day was assigned to Bethlehem. Obviously, they cannot skip Bethlehem. They cannot skip the city of “The Church of the Nativity”.

Finally, the day came when we were to visit Bethlehem. We had our breakfast in the camp and waited for the bus.

Bethlehem like Jerusalem is a tourist place and its economy is primarily tourist driven.

We were told that we would be allowed some hours to move around the market places in the city, and could go shopping or other activities. So we were busy gathering information as to which market place to visit to buy different products.

We were told that the best souvenirs to buy in Bethlehem were olive wood carvings or statues, boxes and crosses. Since it is a tourist place, there were also many shops selling Palestinian handicrafts, Middle Eastern spices, jewelry as well as a variety of local sweets such as Bakhlawa.

We were engrossed in our discussion when a Palestinian friend came to us and informed that, because it was raining in Bethlehem, the trip might be delayed for some hours. It was really disappointing to hear this. We were sure by then that many places that we were to visit in Bethlehem would be skipped. I visited Palestine in the month of December. It was winter then. Since Bethlehem has a Mediterranean climate, mild and wet winters are not completely unanticipated. After a few hours, we started our journey to Bethlehem.

Bethlehem is located in the Central West Bank and is around 10 km south of Jerusalem. The coordinator in our bus started to provide us with general information about Bethlehem’s history. 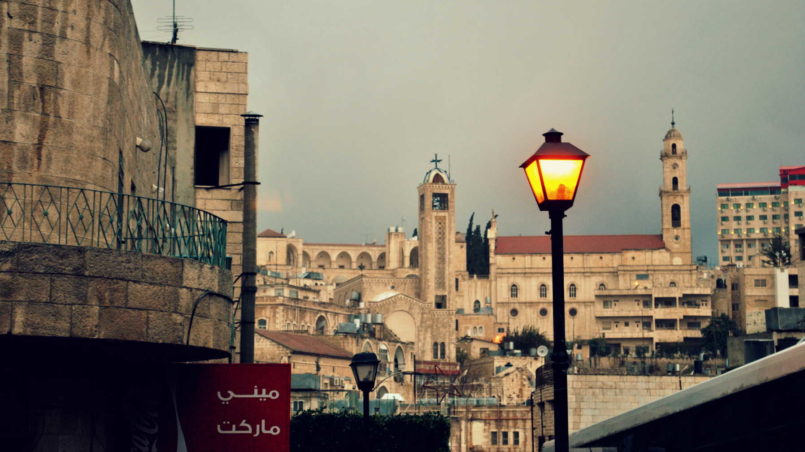 The city is venerated by both Jews and Christians alike. According to the Hebrew Bible, Bethlehem is considered as the city of David, where he was crowned as the King of Israel. Moreover, The Tomb of the Matriarch ‘Rachael’, which is an important holy site for Jews, is located at the northern entrance to Bethlehem.

For Christians, Bethlehem is a very important holy place, as the New Testament identifies it as the birthplace of Jesus. It is swarmed by Christian pilgrims all throughout the year and especially during winters. The Church of the Nativity is the magnet for Christian pilgrims. 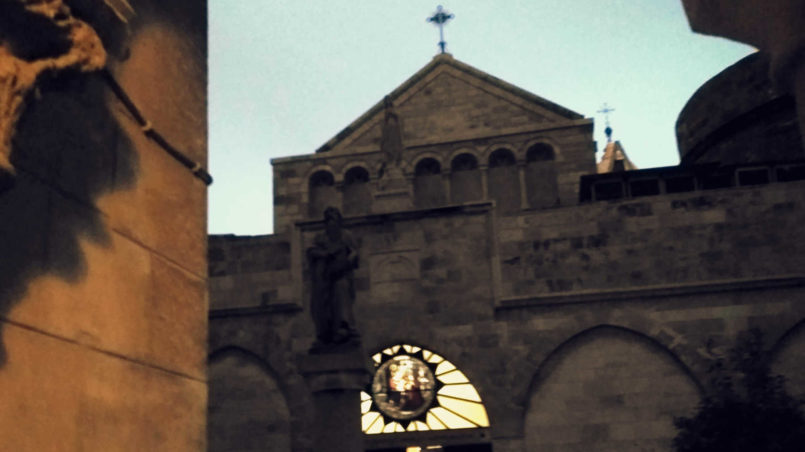 Bethlehem’s encounter with Islam occurred after the Muslim conquest in 637 BC. The local residents of Bethlehem were primarily Christians, but now it has a Muslim majority population. There are also a good number of Israeli settlers in Bethlehem. We were told that the city is surrounded by two bypass roads for settlers, where there are many Jewish enclaves. Though Bethlehem is administered by the Palestinian Authority, almost all entrance and exit points from Bethlehem to the rest of the West Bank are under the control of the Israeli Military Administration for the West Bank.

We were inside Bethlehem city. It was raining heavily. I was looking outside the window of the bus and I loved the look of the city drenched in rain. It would obviously make walking around the city difficult and we might miss out on many things but there was nothing we could do about this.

I believe at times it is better to accept nature’s scheme rather than sulk. A moment of acceptance and everything starts looking pleasant and good. 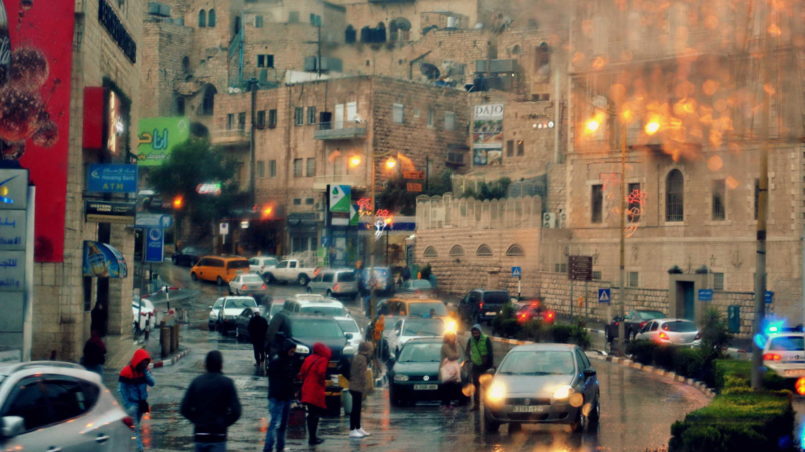 The coordinator told us that we would first visit the Church of the Nativity. We got out of the bus and started walking. It was cold outside. We felt chilled by the drizzle which was accompanied by a cold wind. We were getting wetter with every passing moment. The pebble roads were getting slippery. But still it was fun.

We were at the Manger Square. There was a huge Christmas tree in the center of the square which was beautifully decorated. I realized it was the month of Christmas. The Square looked wonderful. I was told that all Christmas celebrations take place in this square. I wanted to walk around Manger Square for some time but the heavy rainfall did not allow that. 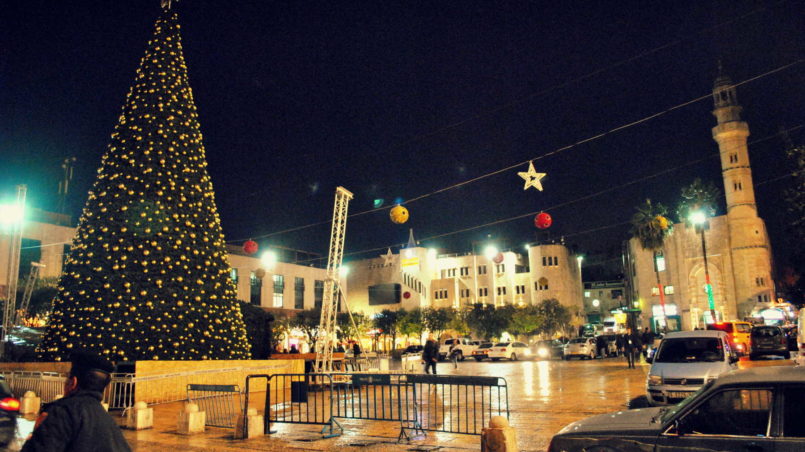 We talked towards the Church of the Nativity. I was fascinated and excited by the very feeling that Jesus was born there and finally here I was, standing near that holy place. We finally entered the Church but we had to wait near the main entrance. There were two other large groups visiting the church. A guide started to tell us about the history of the church.

The church is built over a grotto or cave, which is called the Holy Crypt. And it is there that Jesus is believed to have been born. Near the Holy Crypt, is the Milk Grotto where is it believed that the Holy Family took refuge on their flight to Egypt. Behind the next door is a cave where St. Jerome spent thirty years creating the Vulgate. Until the Reformation, the Vulgate was the dominant Latin version of the Bible. The Church was commissioned by Constantine the Great and his mother Helena in 327 BC.

The Church of the Nativity is also the first to be listed in Palestine as a World Heritage Site by the United Nations Educational, Scientific and Cultural Organization (UNESCO). The site is also listed on UNESCO’s List of World Heritage in Danger.

We observed that the structure and ceiling of the church were under renovation. It was massive and the paintings on the walls of the church were testimony of its antiquity and glorious heritage. The structure of the Church went through a series of episodes of destruction and desecration, caused by both man and nature. And there have been several attempts at its reconstruction and renovation since it was built. 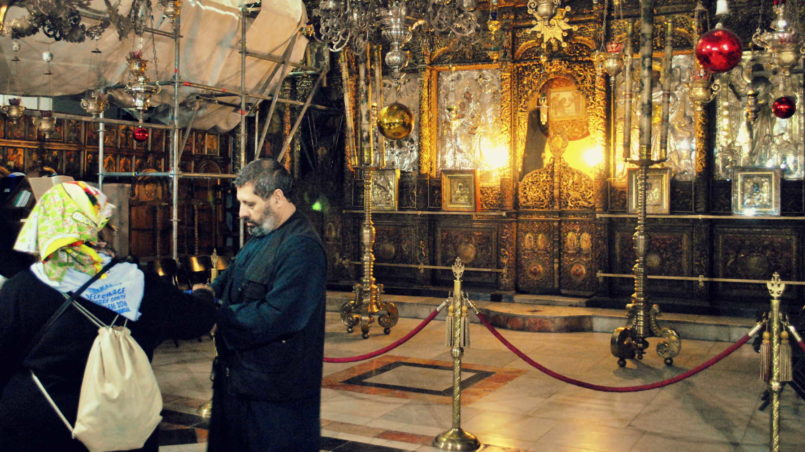 The Church is not just a reminder of antiquity but also of the bitter disputes it might have survived. We read that the Church is administered jointly by Greek Orthodox, Roman Catholic, Armenian Apostolic and Syrian Orthodox Church authorities. We were told by our guide that all four Christian traditions maintain monastic communities on this site; resulting in frequent disputes and disagreements between the different church authorities.

The trainee monks of the above four Christian denominations would repeatedly squabble over issues like quiet respect for others’ prayers, hymns and even the division of floor space for cleaning duties.

I wanted to pray. I did not know  when I would be able to visit this holy place again. But the place was not quiet; it was a small enclosed space, swarming with pilgrims. I finally managed to find a place in the corner to pray. I closed my eyes and just started to pray when I heard someone asking the pilgrims to exit the holy place so that other pilgrims waiting outside could come in. I knew it was time to leave. I wanted to spend more time there but I was still happy that at least I could visit the birth site of Jesus.

I came out of the cave and started to walk outside the Church.

There were many pilgrims from different parts of the world.

We slowly left the church and were back in the Manger Square. It was evening already. The huge Christmas tree with the golden decorations looked beautiful. There was also a mosque near the Manger Square: the Mosque of Omar. It is the city’s only mosque.

It was still raining. Our coordinator informed us about a change to our itinerary, “We are not spending much time in Bethlehem because of the heavy rain. The new plan is to move back to Jericho”. However, we were allowed some time to move around the square and do some shopping or visit some restaurants or cafés.

I went around the shops and purchased some olive wood statues and handmade religious ornaments.

After an hour or two, we returned to our buses. I knew this was coming. We were leaving without seeing many places in Bethlehem. We could not tour around Bethlehem at all. But I decided I will come back to Bethlehem. I will wait until then.