I’m in a pharmacy in Gaziantep – diarrhea, which the Turkish volunteers call “the curse of Ataturk”, has found another victim in our volunteer house – and, as soon as I try to talk in English, this is the first thing I hear.
“Are you Syrian?”, combined with a look of disgust, which turns into interest when I say: “No, I’m Italian.”
The expression of that man in that small pharmacy gives me the first idea of what it means to be a Syrian in Gaziantep. And it means being subjected to extreme discrimination.

Some days later, I’m walking through what is called the “Syrian district” with one of the teachers of the centres where we work as volunteers.

While he talks, he looks down to the ground until we are interrupted by a kid selling tissues. He’s Syrian and, like many other kids, he works to earn an income to help his family to survive. They chat for a while and the teacher gives him some coins.

Can you imagine this? Being surrounded by kids from your own country working in the streets or in factories instead of attending school? I told him to come to our centre, to get an education. He told me he will talk to his father about it. This is a lost generation, says the teacher.

Unicef has actually issued a warning, stating that there is a risk of a Syria’s lost generation: a total of 2.7 million Syrian children are missing out on an education. In Gaziantep – which is home to 400,000 refugees, both in the city and in the camps – 50% of Syrian kids are not going to school. Most of them sit at a sewing machine to support their families.

There is a textile factory where kids work just in front of one of the centres we volunteer in. There’s only one small street separating kids working from kids learning and enjoying having an informal education. 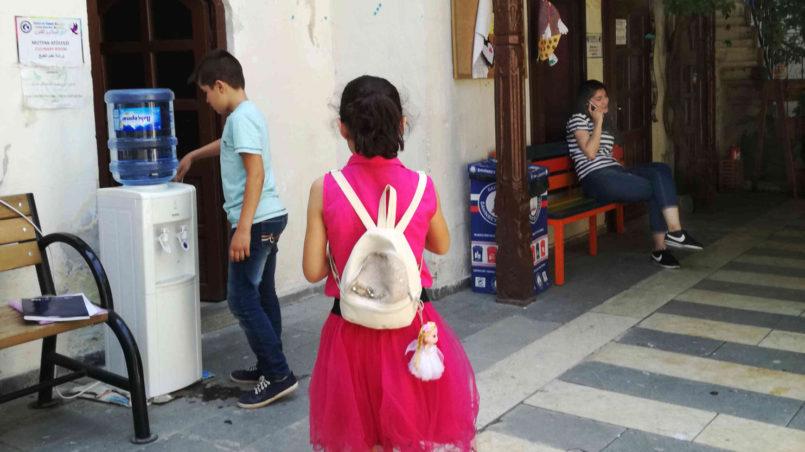 “My fingers hurt”, says the mother of A., an 8-year-old kid who previously came to our centre but who now works with his mother in a textile factory. I still remember her reddened fingers. The father of A. and another little girl lost their jobs and now the survival of the family is on the shoulders of the mother and the first son.

A.’s father informed us that, in Syria, they had everything. A big house, money, animals and his kids could go to school. He also had his own business, working as a guide with his camels for the tourists in Palmyra, recently destroyed by Daesh. You can find Syrian kids in Gaziantep not only selling tissues and working in factories but also collecting plastic and cans.

It’s a very hot day when I bump into two kids dragging huge bags full of rubbish double their weight. They start to look at the can I was drinking with a ravenous face. I move closer to them and with my very basic Arabic, I get to know something about their story. They are Syrians from Aleppo and are 8 and 7 years old. I give them my can, which they cannot stop staring at.

Being Syrian in Gaziantep also means lower salaries and higher rents than those for the Turkish. It means that, in order to hire one Syrian, you first have to hire ten Turkish people. This leads to centres full of unqualified Turkish staff for one skilled Syrian teacher. It means that if you, as a volunteer, are having tea with Syrian guys, Turkish people will never come except to check on you and vice versa.

One time, the Syrian guys from one of the centres organised a multicultural afternoon and dinner, the aim being to promote integration between Syrian and Turkish people. Only one Turkish volunteer came and this is only one example out of another hundred I could give.

The feeling I strongly perceive is the feeling of the unknown that is so typical of the places where refugees seek to reconstruct a normal existence. Life is marked by precarity, more or less dignified, which makes a great effort to fill the wait.

Everyone is waiting for the end of the war, divided between the effort for inclusion and integration in the new reality and the hope to return.