During our time in Delhi, we (Sourabh and I) decide to go for another adventure up in the mountains: a motorbike tour from Manali to Leh and then around Ladakh, in the beautiful mountains of Northern India.

I have wanted to learn how to ride a motorbike for a long time but this wish has always been accompanied by fear. Ever since I was a small child, my parents have always told me that it is dangerous to ride a motorbike and therefore they never allowed me to do so. This fear has remained deep within me ever since. My parents told me stories from their own personal experiences. I know, and have experienced through my work in the hospital, that riding a motorbike can be dangerous and has to be done with caution.

Despite this, I have always been fascinated with bikes, more precisely a very specific kind of bike: the Harley Davidson. I always told myself that I would ride a Harley one day and for years it has been my dream to tour South America by bike. But since I told myself many things when I was a child,  I wasn’t really sure if this wish would one day become reality or just remain a dream.

In Delhi we talk a lot about our future motorbike tour, but we are still not 100% sure if we should do the tour since it is still monsoon season. It would simply be too dangerous to embark on this adventure when it’s raining so heavily. Furthermore Sourabh tells me that if I want to do it, I will also have to drive – since the tour we plan will cover more than 1,000 km, he can’t possibly do all the driving himself.

I know that he is right and I really want to ride the motorbike but I think that this is simply an illusion since I have only driven a scooter once in my life and that was already a big thing for me. I still don’t know exactly how I am going to manage to drive a bike on the roads of the world’s highest mountain but deep down I know that somehow it will be okay.

The day has finally come to leave Delhi, the city with many faces, and to head towards the north of India, more precisely Manali. While leaving Delhi we take the metro, there are different compartments for women and men. I enter the one for women and what I witness there is quite amazing:

Music is playing, some women are dancing and everybody is very happy and enjoying themselves. I have never been in such a “happy” metro compartment before apart from at carnival time. It is nice to see that the city organised separate compartments for women, where they can feel safe and enjoy themselves without being worried about “creepy” men.

Manali is a city in the state of Himachal Pradesh, at the foot of the Himalayan mountains and it is also the starting point of the Manali – Leh highway, one of the most beautiful, scariest and highest highways worldwide. Leh is a city in the far north of India, in a region called Ladakh, which is located in the state of Jammu & Kashmir and bordered by Pakistan on the west and China on the east. Leh is famous for its strong Tibetan influence and the deserted wide areas surrounding it.

As this highway is the only road connecting Manali to Leh, it is used by all different kinds of vehicles: trucks, buses, jeeps, cars, motorbikes and, for the more sporty and adventurous people among us, bicycles. And for those who would rather do without a vehicle, they jog or run on the road.

Nowadays a big part of the road has been prepared by the BRO (Broad Road Organisation), which is supported by the Indian army, but there are still many parts where you are confronted with extremely narrow, steep, non-paved, flooded roads or other different obstacles which can make your journey very challenging.

When we arrive in Manali, we go to look for accommodation in a nearby village called Vashisht. It is a beautiful, small place, which is only partly accessible by car. You can reach half of the village only by foot and therefore it is extremely quiet and peaceful – you can only hear the sound of the wind, some chickens, cows and birds.

Vashisht overlooks the more noisy city of Manali and also offers free hot springs in a temple located in the centre of the village.

When I walk around to explore the village a little, I see that everyone is washing their clothes outside as well as their dishes, under the hot water which comes out of the hot spring. This is very convenient for the locals and the water of the hot springs is believed to have healing powers.

The bath is visited by many people throughout the day and so I also go and try it. While walking inside the women’s bath (seperate baths for men and women are mandatory), I see many women washing themselves as well as their clothes. There are two different areas, one with four pipes where hot water comes out serving as a kind of shower and the other area is the main pool where people can have a bath.

First you have to go to the shower area, sit down, wash yourself and get used to the extremely hot water. Only then are you allowed to enter the pool.

Since the temperature of the water is extremely high and the pool water doesn’t look that clean, I only dip my feet in it and enjoy the midsummer breeze touching my face, watching the full moon and sparkling stars shining upon me and thinking that I am one step closer to making my dream come true.

It doesn’t seem like just a dream now; no, the dream has taken a form and I can see it more clearly than ever … 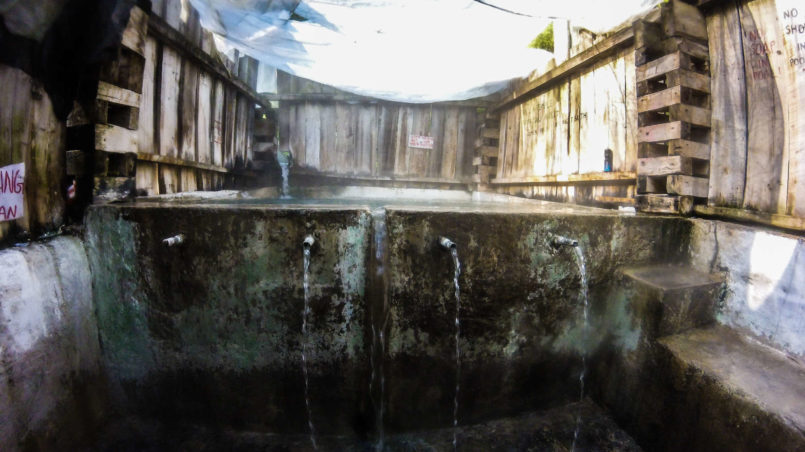