A current exhibition is showing the last places before deportation for the Viennese Jews during the Third Reich. In this first part of our report, scientists and historians who have worked on this subject and its reappraisal, had a chance to speak. The second part, on the other hand, contains reports from contemporary witnesses.

Welcome at the Academy of Sciences

On Jan 27th 1945, Auschwitz-Birkenau was liberated. Only since 2005 has this been the international Memorial day for the victims of the Holocaust.

In Austria, about 66,000 people fell victim to this extermination policy, but as is well known, there was relatively late recognition and appreciation of the victims of the Holocaust in this country.

In 1991 Austria officially admitted their joint responsibility for the crimes of National Socialism, and in 1995 the National Fund of the Republic of Austria was established for victims. Since 2000 there is a monument at Judenplatz.

At the Austrian Academy of Sciences it also took a very long time for this period to be processed: since 2013, a memorial plaque has hung at the entrance to the festival hall, and a memorial book is available in memory of the members and associates of the Academy of Sciences who were displaced or murdered from 1938 to 1945.

In 2015, there was an exhibition and a brochure to commemorate the Biological Research Center of the Academy and its co-founder, Hans Przibram, who was murdered in Theresienstadt in 1944. On this occasion his bust was placed in the main hall building.

Another project is in the works: film interviews with Holocaust survivors are to be conducted and documented in order to convey not only facts, but also emotions to younger generations.

Writing a novel about Auschwitz, which does not hurt the reader, that would be an embarrassment. 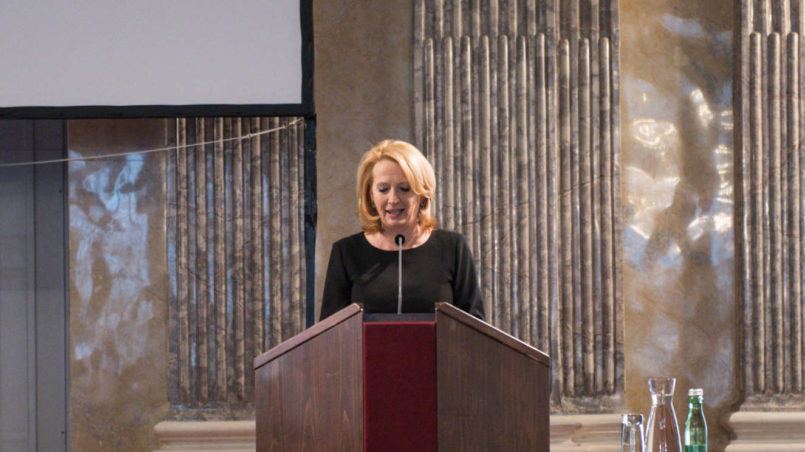 The route from Parliament to the Academy of Sciences leads through the first district of Vienna, along many famous places and addresses, across the Heldenplatz to the Hofburg, the Michaelerplatz and the Graben, to Stephansplatz to Ignaz-Seipel-Platz, the place where the university has its origin. But there are also less known spots along this path, addresses from which Jewish fellow citizens were deported from their homes.

These addresses tell the stories of people, of families, and thus an important part of our country’s history, the story of neighbours ostracizing, robbing and persecuting their fellow human beings. A story that ended in incomparable mass murder – the Holocaust.

This year marks the 72nd anniversary of the liberation of the Auschwitz-Birkenau camp which is the reason for Holocaust Memorial Day.

To be able to remember, we need knowledge about the past, and today we would like to pass on knowledge about the collection camps in Vienna. The images of the people who were deported are known to everyone, we know where they went and what happened there. Today we look at those places where the suitcases were packed. Four locations in Leopoldstadt – because the Holocaust did not begin in the concentration camps, it started right in our midst.

The scientists present today contribute to processing the crimes of that time, and historians enable the stories to be written from the memories of the survivors.

The interview was conducted by Gerhard Baumgartner.

Where does the impetus for this issue come from?

If you hear the addresses Kleine Sperlgasse 2a, Castellezgasse 35, Malzgasse 7 or 16, they will not ring any bells, but these are very important places in the history of the Holocaust. In these places – in former schools – four collecting camps were set up, and from these four camps the vast majority of Austrian victims of the Holocaust were deported to the extermination camps. 45,000 of a total of more than 66,000 Austrian victims, not just Viennese. Here, the people were accommodated in sports halls.

Only in visiting these places with contemporary witnesses does the extent of this cruelty become clear, making it possible to imagine how they experienced it.

A very important motivation is also to bring these places into the awareness of the next generation, the young people. I talked to youths at the exhibition on the November commemoration, and they said Vienna was a black box for them; they all know the pictures of Auschwitz, but they have no concept of Vienna.

The exhibition can still be seen in the crypt of the outer Burgtor until summer. Why this place?

The crypt is a particularly important place: it was decided in 2013 that there will be no more commemorative ceremonies, it will be a place of learning and mediation. A place where every interested citizen can be taught history.

Dr. Sommer, you as a curator were faced with a difficult task. The places are today quite normal buildings in the middle of the city and their terrible past is not visible. How do you deal with this curatorially?

Our first approach was to bring the normality of these houses to the center and still do some “deep drilling”. They are all schools, and that is why it is so important to us to emphasise the historical importance of these places with this exhibition.

They are, on the one hand, the four houses that are at the centre of the exhibition, but there was still a second approach needed for this exhibition. We decided to look closely at the process of these deportations, namely: what really happened with the individual people from the notification that they were summoned until the deportations via the Aspang train station?

We sequenced this process into five chapters – and it soon became clear to us that the history of the perpetrators, by the representation of the power instrument, was too much in the foreground.

We then decided to counter this and to oppose each of these sequences with statements of contemporary witnesses. Thus, through their portraits, in these individual stages of deportation, we were able to put the focus on the viewpoints of the victims.

The main problem with such historical exhibitions is mostly finding pictures. In this case, however, we are mostly dependent on the perpetrators’ images…

The interviews were conducted by Michaela Raggam-Blesch and Dieter Hecht. What were these interviews like, what significance do these collection camps have in the memory of the survivors?

It was a matter of concern for us to acquire information on life in the collection camps, about which very little had been known. That is why we conducted a series of interviews with survivors.

It was very interesting that for those who were actually deported from Vienna, the collection camp was one awful place among many awful places they encountered in the course of their deportation story.

For those who were in the collection camp and then were released – mostly because of the protection of a non-Jewish family member – the camp and the experiences they had made there were among the most traumatic experiences.

And it is from these people that we received the most detailed descriptions about the collection camps, because their experiences were not superimposed by experiences of the ghettos and concentration camps.

We have already touched on the problem of material originating from the perpetrators, Dr. Hecht. Are there any other sources to counteract these?

For a long time it was thought that there were no other sources. However, we learned that there are quite a few when talking with contemporary witnesses or their surviving relatives.

Material can also be given by people, such as Martin Vogel, who was able to survive as a youth functionary in Vienna. Because of his activity, he was in contact with many young people who were then deported and murdered. Many of these young people gave him photos before they were deported, wrote letters to him or even deposited photo albums with him.

We could use all these sources and ultimately tell other stories as well – from the victims’ point of view.

Dr. Rabinovici, you wrote a book about the Viennese system of deportations in 2000. What role did the collection points play, and why has this subject only been dealt with so late?

Here a system was developed by Eichmann, in which, on the one hand, the religious community became a tool of its own destruction, and on the other hand, after all, the Jews had to appear for all to see with their luggage, keys, and grocery cards – which they had to hand over –  and face a commission which decided who was to be deported and who not.

We know the reasons why it took so long to deal with this in Austria. Austria long regarded itself as the first victim of Hitler, and the victims, who were actually first on Hitler’s list, were in the way of this semi-official position

In the collection camp, the question of the offender-victim perspective comes to our attention most keenly. One can not understand this from the perspective of the victim – brutal as this sounds, for it was the perpetrator who had conceived the crime and who also lied to the victims, at every point.

The historian is confronted with the problematic situation that he can only comprehend the crime from the perpetrator’s perspective. This, however, has its blind spots – for then one speaks in terms such as the extermination capacities of the gas chamber.

But it is only the victim’s perspective which allows the meaning of the crime to be recognised.

Then there was a special group of victims: those who were forced to cooperate, to be one part of the whole, and who tried to get the others there fed, for instance. And they had to understand which of the perpetrators held which position, from whom one could ask something, who was still amenable.

This perspective is particularly interesting because it is really our perspective. We try to work out the individual differences after all. And it is also interesting because with every arrival, the victims were confronted with their hopes being destroyed, the fact that they were lied to, that what they were trying to react to (“If you do this, you will get through”) was not so. And then they were ultimately faced with the inexplicable, that which we also face in the research.

This part of the report deals with the motivation for the exhibition about the collection points in Vienna and why it is so important to report on it. In the second part, contemporary witnesses have an opportunity to speak.

For the second part with reports from contemporary witnesses, follow this link.