Ever since I have been interested in Buddhist culture and their way of living, it has been my dream to visit India one day, but as a woman travelling alone, I was also a bit concerned about doing so, due to some horror stories I had heard on the news.

I spoke with different people about travelling to India and opinions always varied extremely, from “It is amazing, you have to go and you will love it” to “Do not ever go alone as a girl!!!“

Deep down I knew that sooner or later I would visit this vast country, full of contrasts, different cultures, religions and landscape which varies from one of the highest mountain ranges on earth in the north, to beautiful sandy beaches in the south and deep deserts in the west.

I was lucky enough to meet three Indian guys on my trek towards Everest and we became friends. They are from Delhi, the capital of India, and as one thing led to another, I finally decided to travel to India after my visit in Nepal. When I arrived in Delhi, Sourabh, one of the Indian guys I had met on my Everest trek, came to pick me up at the airport.

We hopped into a cab and the first thing we did was visit Qutb Minar, one of the most important monuments in Delhi, since it was on the way.

While I was sitting in the taxi, I was overwhelmed with everything around me ‑ there really is a lot to take in. The city is very chaotic, hectic, loud, hot, dirty…

Wherever I looked, I saw people selling something, shouting and just sleeping somewhere, at the side of the road or the pavement. Every time we had to stop at a red light, beggars and street children came to the car and asked for money. Sometimes they performed some mini-street show, like juggling or acrobatics.

So much was happening around me that my senses could not keep up with everything: the different smells, sounds and images.

I could identify at least ten different types of honking: cars, motorbikes, auto-rickshaws, bikes and trucks can be heard. Moreover it is impossible to drive since there is so much traffic and there are cows just standing everywhere and blocking the road.

Cows are considered a holy animal in India, they just roam around freely, wherever and whenever they want. You kind of have to drive slalom around them, because they simply won’t move.

Before leaving Europe, I had heard stories of people coming to New Delhi, experiencing a culture shock when they left the airport building and taking the next flight back home. I never understood this behaviour; I always thought: “What could possibly be so shocking?”. Today I understand.

Even though I came to India straight from Kathmandu, the capital of Nepal, and I am already kind of used to the noise and everything around it, I have to say that Delhi is something completely different. I can’t compare this city to any other place I have visited before.

Finally we arrived at Qutb Minar and Sourabh showed me around. It was extremely hot outside, 40 °C degrees but thankfully after some time it started to rain; it wasn’t like drizzling rain but heavy rain for a short period of time.

Qutb Minar and the ancient monuments around are a UNESCO World Heritage Site. It is 73 metres high, which makes it the tallest brick minaret in the world. The construction started in 1200 AD by a man named Qutb al-Din Aibak, who was also the founder of the Delhi Sultanate ‑ a Muslim kingdom that stretched over large parts of India from 1206-1526. 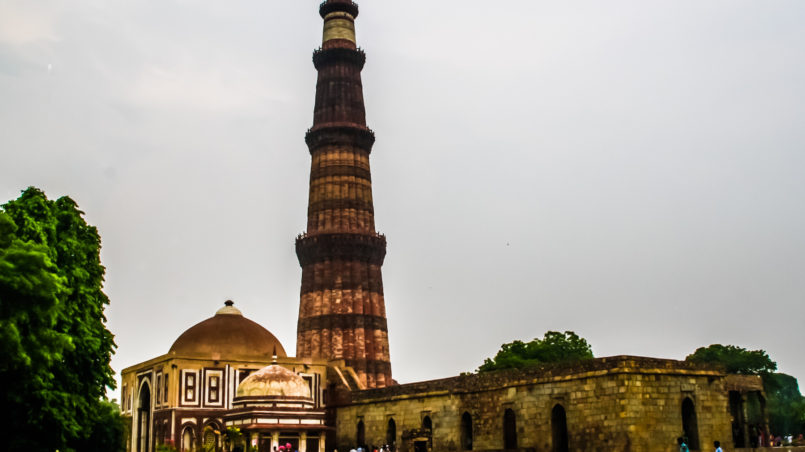 After a while the rain stopped, we took an auto-rickshaw and dropped off my bags.

Sitting in the auto-rickshaw was an even more intense experience than previously in the cab, since it was open and I was more exposed to the environment around me.

There were seriously a lot of people on the streets, mostly men and many of them stare ‑ they don’t even say anything, they just stare and make you feel uncomfortable. I was really grateful that Sourabh was with me and he assured me that I would get used to this craziness after some time. I really hoped so.

After dropping off the bags, we went to visit a temple nearby, the Gurudwara Bangla Sahib Sikh Temple. Before entering this temple I was asked to remove my shoes, wash my hands and feet and cover my head.

Before we entered, we walked around the lake situated just in front of the temple and observed people taking a bath, since the water is considered as holy. We met one young student, who was very eager to tell us about his religion. As I had never heard about this religion before, I was very curious to find out more and so we walked along with him.

Sikhism is a monotheistic religion, which originated in the 15th century in Punjab (north India) from warriors. People from all faiths and even those who do not believe are welcomed in Sikh temples.

They worship the sacred scriptures of Guru Granth Sahib and connect to God by mediation, selfless services and by striving for social justice for the benefit and prosperity of all.

According to Indian law, they are allowed to carry the sword even in the airplane during domestic flights, as it is seen as something sacred.

After some time, we stopped and he told us to wait because soon we would be able to get the Langar (free vegetarian meal). The doors would be opened to make space for the next big group of people to have their lunch/dinner.

Gurudwara Bangla Sahib Temple is open 24 hours a day – 7 days a week and offers free vegetarian food as well as free accommodation (if necessary) to everyone The temple is known to feed 10,000 people in just a day. How amazing is that?

A few minutes later, the door was opened and we entered, along with another approx. 200-300 people. We sat down on the marble floor, cross-legged and waited. There were many people moving around and everyone was carrying something: plates, glasses, spoons, water, dal (lentils), rice, chapatti (flat Indian bread), vegetables and last but not least chai (milk tea). Someone came to us and served us.

We could have as many refills as we wanted, there is just one important rule to follow: give back an empty plate.

The food was very tasty and it was an amazing experience to share a meal along with so many people: people of different casts, skin colour, religion, etc. The positive vibes and love are clearly felt throughout these halls and, even if it is just for a short time, it felt like we were all a unity.

Once we finished eating, we deposited our plates in a big basket of water.

Many of the people who work in the kitchen or serve the food are volunteers who help out regularly or even just for a day. Since I was so amazed by this free food concept, I also decided to volunteer for some time. When I entered the kitchen, I saw the biggest cooking pots that I have never seen in my life – they were huge.

I saw different people rolling dough to make chapatti and grilling it. When I sat down next to them to help, a woman showed me how to do it properly but there was no way I could keep up with her pace. When I finished one, she had already done three. This truly is an amazing experience.

The young student told us that the food distribution is based on donations and each Sikh follower is expected to donate 10% of his income (if possible) to the community.

As soon as I finished, we all went to the temple together to witness the ceremony where they bring the sacred book of Guru Granth Sahib.

After seeing all this I must say that I was quite amazed at the way of caring and respecting “the other” and of the free food concept. 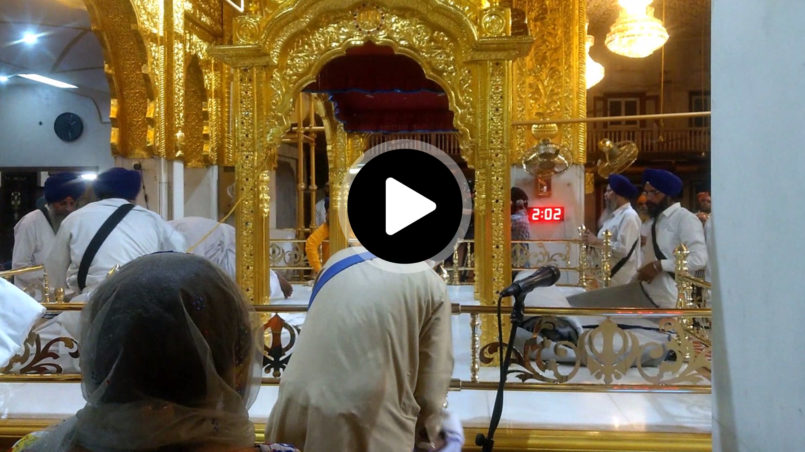 When we left this temple, we took the auto-rickshaw to go to a different area of the city and visit one of the many Hindu temples. Since it is common to bring food offerings to Hindu Gods, mostly consisting of flowers and fruits, when entering the temple, we also did so. We removed our shoes, paid a few rupees and entered.

While walking up the stairs, I could see a large metal bell that everybody rings and so I rang it too. The vibrations created by the sound of the bell are believed to bring positive energy.

Inside the temple I could see statues and images of many different Gods. In the Hindu religion there are three main Gods but they are represented in 330 million different forms. Hindus pray to the specific God according to their field of interest and the situation of life they are in.

There are many temples such as, for example, the Ganesha temple (Elephant God) which is for good luck and intelligence, the Hanuman temple (Monkey God) which is related to strength, protection and devotion, the Krishna temple which is characteristic for love, the Goddess Saraswati who is for music, arts & wisdom and many many more Gods…

When walking around the temple – you always have to do so clockwise – I saw many people wearing orange and white clothes.

These people are so-called Babajis, and can be compared to monks in the Christian religion. The white colour represents the peace they spread among the world, whereas the orange colour represents that they are “burning” themselves, since they have left all the pleasures and relations in this materialistic world. I could clearly feel the peace, calm and selfless love which the Babajis were spreading around the halls.

Before leaving the temple, the priest put a flower chain around our necks, painted a tilaka on our foreheads and put some sugar-coated puffed rice (prasada) in our hands; this is considered as giving the blessing. Tilaka is a coloured paste made out of grained sandalwood and turmeric; it is believed that it helps in keeping you calm and also has medicinal value.

We went down the stairs, rang the bell again, took our shoes and left.

Not too far away from the temple, there is a very nice place where you can eat the best paranthe wali gali, a famous Indian pan-fried dish, in Delhi; so we went there for dinner.

Today was a very intense day but I liked every second of it. I learned about many things which were totally new to me and even though I saw some misery and poverty around the city, I also saw the good in people – like the free food distribution.

Initially I thought I would hate this city but thanks to Sourabh, who showed me around all the awesome places that Delhi has to offer, I actually fell in love with this city.

In my next article I will tell you more about it.