The first city I set foot on in Palestine was Jericho. In fact, our stay was arranged in Jericho. I cannot say if it was a fortunate stroke of luck or mere coincidence, but I was euphoric when I got to know about it. I have always had a strange attraction to historical places; old monuments and artefacts enthrall me and ignite a feeling of wonderment. And I could hardly believe that I was getting the chance to visit the land of antiquities without even making any plans for it.

Jericho is one of those cities which harbored many great civilizations of antiquity. In fact, it is considered as the oldest continuously inhabited city in the world. Those of us interested in history and archeology would be amazed to know that Jericho is the typesite for the Pre-Pottery Neolithic period and has been inhabited since 10,000 BC.

Located around 258 meters below sea-level in the valley of Jordan and just six miles away from the Dead Sea, Jericho is a fertile green oasis with groves of palm trees.

And that’s why I was very eager to see the physical landscape of Jericho. However, since we reached Jericho at night after the lengthy number of hours at the Allenby Bridge, any view of the landscape was hardly possible.

The next morning when I woke up and opened my eyes, I had the first glimpse of Jericho from the windows in my room. It was beautiful. But it was a little different from what I had imagined as I had a very different idea of an oasis.

However, with each passing day I discovered the different faces of Jericho: the completely barren stretches of undulating desert mounds around the highways that linked Jericho to other cities; the city streets ornamented with beautiful palm trees; fertile green stretches of land around and near the main city; semi-arid areas; the beautiful and calm view of the Dead Sea from the city, etc.

At times I felt that the contrasting vistas were so incongruous. But believe me, this very incongruity would just leave you mesmerized.

The place which we frequented the most in Jericho was downtown Jericho. It is a small area that encircles a road in the new city and houses many small shops and outlets. Every day before going back to our camps (after the tours in different cities of the West Bank), we would stop at the downtown market to chill-out in some café or shisha bar or do some shopping.

I would like to mention an incident that really amazed me. After our tour to Hebron, as usual we visited the downtown market. While most of the group went to nearby cafés or went shopping, some friends and I decided to go for a cycle ride around Jericho city. We hired some cycles and rode around the area surrounding downtown Jericho.

I hadn’t been cycling for a very long time but it was really fun as the roads were almost empty, with only a few vehicles passing by. The air was cool and pleasant. We were enjoying the cycle ride so much that we almost reached near the Al-Karama Gate (Palestinian border terminal). One of our Palestinian friends advised us to ride back, as it might not be safe to be near the borders.

While cycling back, we came across amazing graffiti on the street walls. One of my Indian friends wanted to take photos of the graffiti and so she parked her bike and started clicking. The rest of us decided to ride to another part of the city.

When we all went back to the cycle store, we saw her standing alone and completely baffled. She told us that someone had taken her bike when she was so engrossed in taking photos. One of our Palestinian friends explained the situation in Arabic to the shopkeeper. She offered to pay for the lost cycle.

However, to our surprise, the shopkeeper refused to accept the money, saying, “You are our guest. I cannot accept the money.” That was a really beautiful gesture from a poor shopkeeper. We were quite touched by his hospitality. However, that was not all that left me so impressed with the people of this city.

After a while, we saw two young boys approaching the shopkeeper, asking if the bike that they had belonged to him. They said they had found it in a corner of the street and so decided to look for its owner.

At times small acts of goodness are more than enough to overwhelm and assure us of the goodness which survives amidst increasingly visible moral degradation. I could hardly think of such gestures in my country. Goodness and idealism still prevails in this country which is perceived by the whole world as extremely dangerous.

The oldest cities are always reminders of construction and of destruction; of humanity and of savagery; of nature’s benevolence and ferocity. Saint George’s Monastery was the first place we visited. Our visits to the historical places in Jericho were carried out in different days. This Greek Orthodox monastery is located on the Mount of Temptation. It is said that the monastery was built by monks or hermits, but was destroyed in 614 A.D. However, it was rebuilt by the monks again during the Crusader period.

It is believed that this is the very site where “Jesus” fasted in a cave for forty days and nights. Interestingly, this place is 350 meters above sea-level whereas the rest of the city lies below sea-level. We walked all the way up to the monastery but were denied entry. We weren’t happy about this but the magnificence and the view from that height was enough to undo any hard feelings.

On the first day we witnessed the beauty in that which could survive both man’s and nature’s brutality. 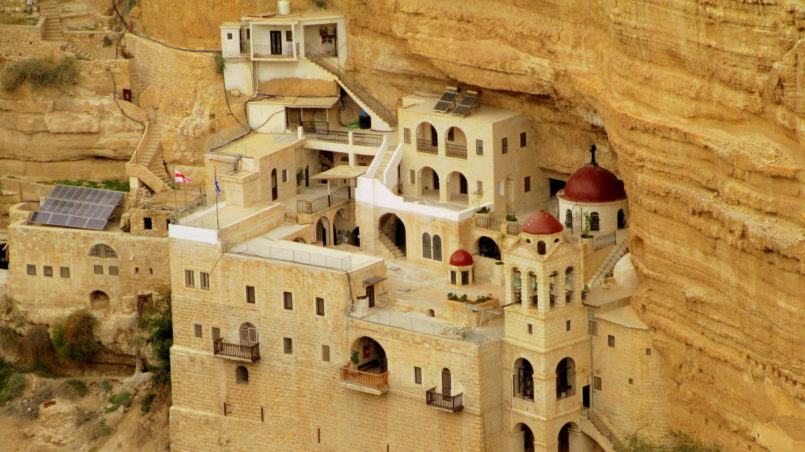 The next monument we visited in Jericho was about both construction and destruction. Constructed by man and destroyed by nature. And finally preserved by both, so that we can marvel and sigh at the same time.

This historical site in Jericho is Hisham’s Palace. It really left me astounded. In Arabic it is known as Khirbet El-Mafjar. It is archaeologically the most important monument in Palestine. It was constructed during the reigns of the Umayyad dynasty but is believed to have been destroyed by an earthquake. The mosaic floors were a real treat to my eyes and kept me fascinated for a long time. I really could not stop admiring the expertise of the craftsmen who had built it with so much patience and passion.

The tranquility amidst the ruins kindled a somber feeling within me.

I loved that feeling and I did not want to leave that place. But I had to. Too little time and too many places to visit.

It would not be an exaggeration to say that, amongst all the places I visited in Palestine, it was Jericho  which often makes me feel very nostalgic.  Strolling around the roads near our camp, hanging out in cafés and shisha bars, collecting souvenirs from the small shops in the downtown market, trying local snacks from the street stalls and especially connecting with people  in the process really left a mark on my memory.

At times I really miss the place and its warmth!