Between enthusiasm and suspicion – China’s neighbors

The image of China in Asia is ambivalent. In recent years, the government has been trying to improve its image abroad through direct investment and diplomatic balancing – also to compensate for the ever growing economic preponderance. While Pakistan is pleased with the infrastructure, Chinese factories can occasionally be seen burning in Vietnam.

The Association of Southeast Asian Nations (ASEAN for short) is Asia’s most important economic community. It includes 620 million people. The added GDP of the ten member states results in 2.5 trillion dollars. With looming conflicts in the region, the community kept trying to have a balancing effect. With the founding of the ASEAN Economic Community in 2015, an important inclusive step was taken: next to economic topics, it also covers social themes and security issues. The latter are also the focus of the ASEAN Regional Forum, the world’s largest security agreement in which the United States and the EU, as well as Russia, are involved.

Although China is not a full member, it cooperates with the free trade zone through the ASEAN + 3 agreement – which was completed in response to the Asian crisis of 1997/98 and which, beside the People’s Republic, also includes Japan and South Korea – as well as via the China ASEAN Free Trade Agreement signed in 2010.

By now, China is either most important or second most important trading partner for all Southeast Asian states. Tensions in the South China Sea, which have increased since 2008/9, however make the distrust of residents against the giant empire rise again. Besides China, the USA, Japan, India and Australia have strategic interests in this region.

The aim of the initiative ‘Master Plan of ASEAN Connectivity’, adopted in 2015, is the development of infrastructure within and between Asian countries, for example in the bottleneck between India and Burma. In order to implement the projects laid out in the master plan, investments of 60 billion dollars per year are needed. This plan fits China’s described ideas well. Asia has only two large cargo ports – here the Chinese “String of Pearls” Initiative will help, in the course of which 47 ports are to be expanded worldwide. 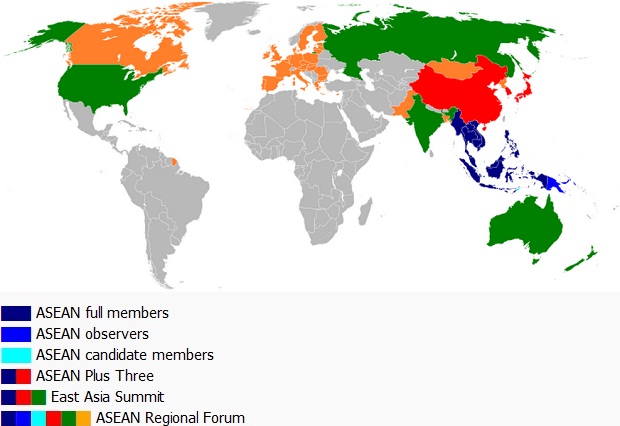 Unlike Europe, the United States have recognized the signs of time and change their foreign policy, in some cases dramatically. The reconciliation with Iran and Cuba did not happen by chance, nor did the slow retreat from the Middle East *. Obama’s pressure to conclude the Trans-Pacific Partnership – next to the expectation that his successor (be it Trump or Clinton) will not want to sign this agreement – is aimed at containing China’s diplomatic and economic expansion in Asia. The rapid development of AIIB has obviously surprised the Americans – especially the joining of so many European allies. As a non-member (the only notable one along with Japan), they can only try to exert influence via their allies (eg the UK). The initial deflection however has now given way to a pragmatic acceptance. Obama’s visit to Hiroshima is certainly to be understood as a sign, to further bind the Japanese as the closest ally in Asia.

The notion that the United States might be sent from this chosen path, should Trump be elected, is deemed unlikely by the debaters. Every president has to deal with China and set aside their own sensitivities (Iran Deal etc), for the main body of American strategists are convinced of this direction of thrust. Likewise, the panelists do not expect a third world war between the two powers in the foreseeable future, since the United States and China are economically heavily interdependent – China needs the sales market, and the United States need a potent creditor (China is by far the largest donor). Many speak of Chinamerica.

* Colonel Norbert Lacher called the US involvement in the Middle East one of the worst mistakes of American foreign policy ever. The time and resources that have been spent there, would have been better invested (by peaceful, diplomatic and economic way) in the Far East.

China and the region powers

Russia’s relationship with China is just as ambiguous as that of many countries on the Asian continent. On one hand, the economic relations were increasingly expanded and especially in the field of military technology exports, Russia is China’s first and best supplier. On the other hand, the Russian leadership recognizes demographics: the shrinking Russia has a concerned eye on the river Amur, the Siberian southern border, where about a hundred million people, who would be only too happy to take the sparsely inhabited expanses of Siberia (including the massive natural resources) are waiting. Putin’s warning to possibly use nuclear warheads even without nuclear threat, was therefore (contrary to many newspaper reports) not directed against NATO, but against China – say the experts of this panel.

The rivalry between India and China is no longer as hot as a few years ago, even if the border disputes are not solved yet. Yet in Dehli, the aspirations of its northern neighbors, the two immediate ones being Pakistan and Burma, are being watched closely. China’s economic expansion in all directions strongly restricts India’s scope as well as the geographical location (Himalaya). India itself lacks a global strategy for action, the decision whether the geo-economic or the security aspect should be at the forefront, must be made. Likewise, relations with Africa and the Asian neighbors as well as with Russia need to be intensified. 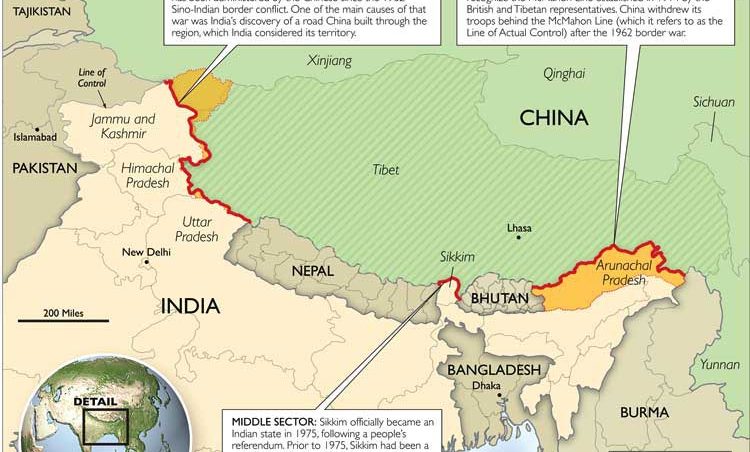 Both Russia and India are lagging behind the Chinese development, experts say. Both have a worse starting position (geographically and demographically) and can not stop China’s rise due to their internal and external problems.

Japan’s image in Southeast Asia has become very positive again. After the ravages of World War II, Japan has made reparations and sought diplomatic balance with most countries. Japan as well as China depends on the South China Sea as a main route of transport for raw materials and goods. Therefore, it has intensified its maritime cooperation with Australia, India, Vietnam and the Philippines. The economic competition with China is present on many levels, including the express train business.

And what is Europe doing?

According to the experts involved in the debate, Europe has so far not formulated an answer to the New Silk Road. The fact that China is deeply involved in EU investment projects, and expanding cooperation within the framework of the 16 + 1 Initiative massively, seems to elicit no particular reaction in Brussels and Europe (with a few exceptions).

The Chinese initiative may well be seen as a new impetus for closer economic cooperation, also with regard to more independence from the United States. For this, however, a sophisticated and wide-ranging strategy is required at all levels – especially on the Pan-European one: as a single nation state one will not be able to offer any resistance to the economic power of China in the coming decades (see eg the mentioned demographic and GDP development), thereby maneuvering oneself into an extremely poor negotiating position.

However, at least Eastern Europe seems to embark on this path, which may mean the end for the European project in the long term (not only, but also for this reason). Yet, to many a national politician, charity begins at home and the billions from Cathay are just too tempting short term.

At the end of this series I would like to commend an approximately 30-minute video link to an analysis of China’s position by two American experts: