Would you agree with me if I said that food also humanizes us? I believe that the ritual of eating together and sharing food brings people together and closer. In fact, in our globalized world, food has taken on a very important role in bringing  together people from different corners of the world. Sharing and possibly redefining tastes, which were once savored only in one country or in one region but which are now enjoyed by people in different parts of the globe, seems to have a connecting effect.

Food evolves as it travels across the planet as a result of either the application of new technology or its customization by different cultures with different taste buds. I believe we usually like to share our culinary knowledge and feel good when people from different cultures or regions appreciate and enjoy our food.

However, there are also controversial political aspects related to food, in particular, the understanding and belief that food is also one of the means through which distinct national and ethnic identities are both formed and lived out. This phenomenon is very pronounced when it comes to Palestinian food.

My first encounter with Palestinian food was a meal which comprised of khubz, hummus, labaneh, ackawi cheese, salad, canned meat and tea. Khubz is everyday bread and is usually used to scoop up various dips. Hummus is a side dish usually made of boiled ground beans and at times mixed with tahini (sesame seeds). Labaneh is a thick and creamy spread made from strained yoghurt. Although I was expecting something else, I tasted all that was served, as I was eager to try out Palestinian food. Initially I had expected that famous food would be served in the camp, but I gradually realized that my expectation was unreasonable.

Being an avid food lover, I was also very eager and excited to experience and enjoy the different types of dishes and flavors typical of Palestinian food.

The food served in the camp started to become monotonous but I wanted to explore as much as I could. My love for food often led to interesting discussions with Palestinians. Whenever I got the opportunity to taste a new Palestinian dish in a restaurant or at street stall, I would ask about how it was cooked, ingredients and other aspects of it.

However, such simple questions usually ended up in political discussions regarding Palestinian food and its role in the preservation of their heritage as well as in the continuation of Palestinian history. Although I was partially aware of this aspect, I did not realize its gravity until I visited Palestine.

The opportunity to taste a variety of Palestinian dishes became difficult owing to the tight schedule that we had. However, the coordinators did their best to introduce us to the most famous and important dishes. The Palestinian city of Nablus is believed to be the place where kanafeh, a cheese pastry soaked in sweet sugar-based syrup, originated. In the old city of Nablus, we visited the most famous as well as oldest place where kanafeh is made. 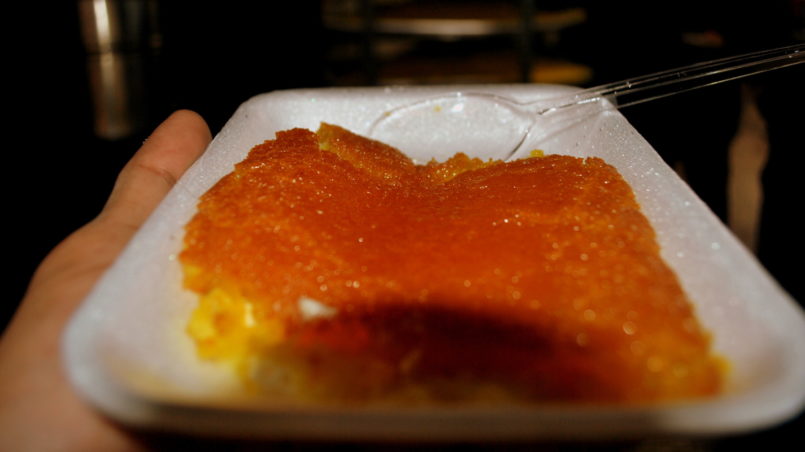 Usually owing to time constraints and also because of the large size of the delegation (around 130 participants), we were usually provided with packed lunches when we were travelling. However, whenever possible, we took time out to go to restaurants and street stalls to explore Palestinian dishes such as mansaf (which is a famous Levantine dish), shorbet adas (lentil soup), maklouba, kababs, bakhlawa and others. 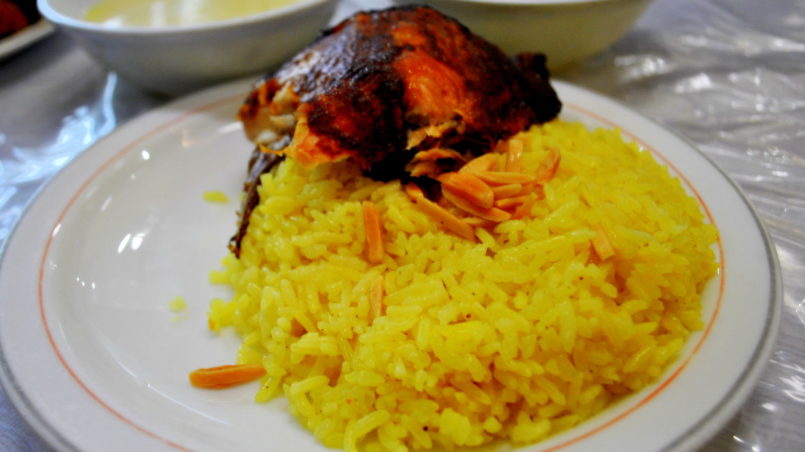 I gradually realized that culinary knowledge is situated at the core of the social identity of Palestinians, especially women, and it is also an important part of the process of gender socialization. Moreover, what I observed is that the public face of food is male, as I hardly saw any women selling food in restaurants or street stalls.

Much of the Israeli-Palestinian conflict is in a way about identity. Food has always served to be a part or a marker of people’s identity all over the world, and it is evident in the Israeli-Palestinian conflict where food has been brought into the ambit of the politics of identity. It would not be wrong to say that food has started to play an important role for Palestinians, whose national identity is constantly undermined so as to justify the denial of a state to them.

In fact, food has become one of the tools of resistance for Palestinians.

Accusations of cultural appropriation abound in the narrative of Palestinians against Israeli occupation. And food is an important part of this whole issue of cultural appropriation. I became aware of the scramble for “ownership” of many dishes which are popular and considered traditional by both Palestinians as well as Israelis. Hummus and falafel are a but a couple in the list of such disputed dishes. To be honest, I was introduced to hummus in India as an Israeli dip or side dish. However, my visit to Palestine made me aware of the intense debate regarding the “ownership” of hummus. Palestinians and Israelis dispute the origin of and innovation regarding hummus. Outside the region, hummus is popular as an Israeli dish. However, in the Middle East region, it is an Arabic side dish or dip. The same is the case with falafel.

However, a close look would reveal that the political issue surrounding Palestinian food is not so much about ownership but about historical distortion and devaluation.

According to a Palestinian restaurateur, Palestinians who are struggling to assert their distinct identity and history by every possible means would be happy to spread and share their dishes with others around the world. However, according to him, the opposite is happening and this is very detrimental for a struggling nation (Palestinians), because there is confusion as to the origin of such dishes as Israelis are spreading the idea that such dishes belong to them. Such appropriation of cuisines is also viewed as a part of the larger process of de-Palestianization.

In an attempt to limit such appropriation of Palestinian food into the Jewish culinary repertoire, Palestinians distinguish between home food and restaurant food. General discussions with Palestinian participants in the camp during lunch or dinner revealed that the food served to us in the youth camp as well as in the restaurants is not what they consider traditional Palestinian food.

However, the dishes are very close to traditional Palestinian food but not what is preferred as traditional food at home. This phenomenon is followed intensely by Palestinians in Israel, where Arabs and Jews live side by side. The process of maintaining culinary knowledge and limiting its diffusion into the Jewish culinary repertoire begins in the kitchens of Palestinian households.

I was really amazed to find how every aspect of daily life has become entangled in the struggle for identity. Appreciation of the intersection of food and politics in the region only validates the intimacy of the Palestinian struggle.