In 1975, the 12th late King of Nepal, His Majesty Birendra Bir Bikram Shah Dev, on the occasion of his coronation, proposed that the United Nations should declare Nepal a “zone of peace” which was accepted by 116 countries all over the world. In Nepal, the people are so peace loving and so quiet that they rarely participate in criminal or terrorist activities.

But besides this, there is another hidden fact of the Nepalese people that makes them the most violent people in the world. Yes, the ignorance and superstitions that prevail among the Nepalese people make them one of the most violent people in the world. The topic that I am referring to is the Gadhimai festival, the way people celebrate it and the huge massacre of animals that takes place during the course of the festival. Actually it is the world’s largest sacrificial slaughter of animals that takes place in the Bara district of Nepal.

According to Hindu religion, Gadhimai is the goddess of power and it is believed that if people are able to praise her, she will fulfill all the needs of her followers and give them great power.

In Hindu culture, there is a strong belief that people have to sacrifice huge numbers of animals to please the Goddess Gadhimai. Since the Gadhimai festival is celebrated once every five years, it is greatly revered by those devoted to Gadhimai. There is a temple of Gadhimai in Bariyapur in the Bara district which is believed to be approximately 1,000 years old. Regarding the history of the Gadhimai temple, a story tells the background to it:

Once upon a time, there was a farmer named Bhagwan Chaudary from Tharu community who was being arrested in jail for stealing at Makwanpur Gadi of the Makwanpur district. On the way he worshiped Goddess Gadhimai and requested heartily to release him. On the same night, the man had a dream, and in his dream, Goddess Gadhimai appeared and told him to re-establish her shrine to a new place and also told him to offer animal scarification as the precondition for the fulfillment of his wish. That night, the man was able to escape from the prison and went to Bariyapur of the Bara district and made the ‘Gadhimai temple’ there and started to worship her with ritual scarification of animals.

In Nepali, “Gadhi” means goddess and “Mai” mother. Until today, it is believed that the priests of the Gadhimai temple are the offspring of the priest, Bhagwan Chaudary.  There is, however, another story regarding the celebration of the Gadhimai festival:

Once upon a time, a monk named Rassaguru used to live in that region around 11th century. He had gained much spiritual knowledge by praying to Gadhimai. He was so powerful that he could control wild animals such as tigers. He kept such wild animals to undertake his domestic tasks, like ploughing his fields (in the same way that ox or buffaloes would) or to carry food or fruits for him. Later on, when asked by people how he could do this, he told that he pleased Goddess Gadhimai by sacrificing animals, and hence as a blessing from her, he gained the power to control wild animals like tigers.

Since then it is believed that Gadhimai is the goddess who exists in real and hence the Gadhimai festival is celebrated every five years in Nepal.

The Gadhimai festival is one of the most famous festivals in Nepal which is celebrated in the month of November. The festival starts on 24th November and continues for about 15 days but the first two days of the festival are “peak” days, where about almost 500,000 animals are sacrificed in the name of Gadhimai (the mother of all sacrifices). About 90% of the visitors to the Gadhimai festival come from India and the districts bordering Nepal with India. More than 70% of the visitors come from large cities in India such as Bihar, Kolkata, Mumbai and Shimla. People bring many animals with them to sacrifice at the festival.

Most of the animals like buffaloes are brought from India. As the festival inches closer, devotees hire people to look for rats in the forest so that they can sacrifice them at the festival. People bring five breeds of animals with them to sacrifice. In addition to the sacrificial slaughtering of animals, shopping stalls, a variety of food stalls, a zoo, a circus, etc. are other attractions of the Gadhimai festival. In Nepal, mostly people who are members of the Tharu and Madhesi communities take part in this festival.

Gadhimai festival is celebrated in a unique way. On the first day, priests first try to wake up the Goddess Gadhimai and one of the priests has to donate blood from five organs of his body and sacrifice that blood to Gadhimai. After that, as the proof of awaking Gadhimai, it is said that inside the pot, there will automatically burn one light, but this can’t be seen by everyone as it is hidden from view by a circle of priests. The light can only be seen afterwards. The priests then bless the weapons (khukuris) which are covered with red cloth as they are used to slaughter the animals.

Now priests take some vegetables and fruit and start to make three different types of poles, which will be put in place in different spots and the slaughtering of the animals can begin. Since the Goddess Gadhimai should be offered five different breeds of animals, called Pancha Bali (five offerings), five types of poles are made. After the poles are in position, the priests bless them as well as the large hole where the heads of the slaughtered buffaloes will be placed. As soon as they have finished blessing the poles and the hole, one of the priest’s wives starts to tremble and her whole body begins to shake. It is said that the Goddess Gadhimai has entered the human body, she is present there and immediately afterwards, the priests indicate that the sacrificial slaughtering of the animals can begin.

The animals are slaughtered in a very inhumane manner: while killing the animals, as much blood as possible should flow in order to please the Goddess Gadhimai. 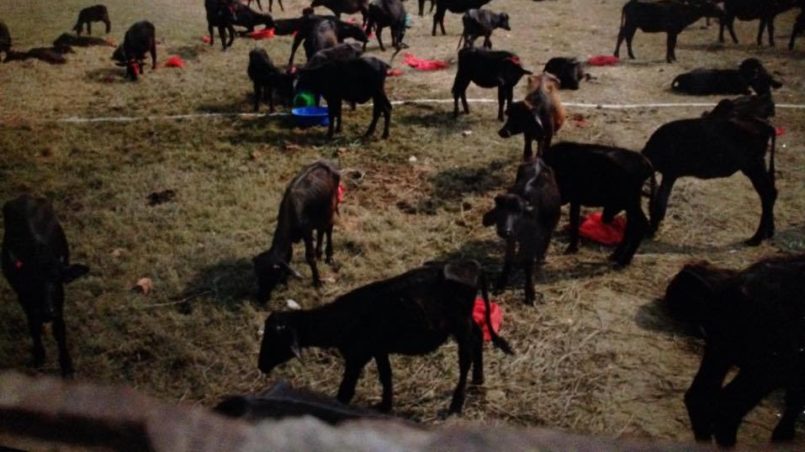 The animals that are sacrificed in the festival as Pancha Bali (five offerings) are buffaloes, goats, pigs, rats and pigeons.

Some people also sacrifice chickens or ducks instead of pigeons if they don’t have pigeons available at their home. One large, separate enclosed stadium is prepared for the slaughtering of buffaloes, and there are separate places where the other animals are sacrificed.

The slaughtering of the animals is so cruel and inhumane that it crosses all the limits of cruelty. Around 500 people are given a license to slaughter the animals but they are so unqualified and untrained that they take about 25 attempts to kill a buffalo. This is why the animals suffer a very slow and painful death.

Blood can be seen everywhere. The ground becomes saturated with blood and turns red in color. According to past records, about 25,000 to 30,000 buffaloes are sacrificed within a single day at the festival. It is not known exactly how many of the other animals are killed as these are not counted but altogether it is believed that about 500,000 animals are sacrificed at the festival. Those taking part in the festival are not allowed to take the meat from the buffaloes, pigs or goats because this is later sold but they can take the sacrificed birds with them.

It is said that God is the creator of all things in this world. It is also a well known fact that everybody loves his/her creations equally like parents love their children equally. So why do we sacrifice God’s creation to a Goddess? Aren’t animals God’s creations??? Does it really make God happy…? I don’t think so at all. We cannot kill animals like this. The animals are massacred in a manner which violates their rights. Whenever the slaughterers see a live buffalo, they run as fast as they can to catch and behead it. They think that if they cut up more animals and put a “tika” (a red spot of color that we put on our foreheads) of blood on their forehead, they show that they are more devoted to their religion. But they don’t know that they are doing a crime and a sin.

I think all these things are ridiculous and 100% superstitious. With the passage of time and the emerging advanced world, we have to change our way of thinking and ourselves. The good aspects of our religions, cultures, traditions and customs should be continued and the negative aspects things must be corrected.

Despite this horrific tradition, in 2015  the “Gadhimai Temple Trust” declared that the sacrificial slaughtering of animals at the Gadhimai festival would end and it has promised to make the Gadhimai festival in 2019 totally free of dead animals and blood. Along with the Trust, various animal rights organizations, such as the Humane Society International/India, Animal Welfare Network Nepal and numerous other animal protection groups have tried their best to raise awareness of this tradition and have contributed significantly to banning this event. I hope this prohibitory declaration by the Gadhimai Temple Trustees becomes reality in 2019 because in Nepal there are many things that are abolished and prohibited by law but which still take place in reality. We want to appeal to the Gadhimai Temple Trustees to keep their promise and help us to protect millions of animals from being beheaded.

I, myself, as a follower of the Hindu religion, discourage theses types of traditions that violate the rights of animals. I would like to see this tradition being fully banned. With this article I want to give the message to all followers of the Hindu religion to stop this horrific activity of the mass slaughter of animals and show our love and affection towards all creatures on this planet. I also ask the whole world to help to abolish this tradition and to help us ensure a momentous and blood-free Gadhimai festival in 2019.