Today was one of those days that seem like they never end, a day which feels like a whole week, a day I will never forget and one of the best days of my life. We have experienced so many things today and I have felt so very much alive. I will take some time to process and digest all of it.

(from When Magic Happens, Dance along with it)

I wake up in the morning with the sunlight touching my face and a strong smell of gasoline entering my nostrils; we hid the extra fuel in the tent so that no one will steal it. Even though I am wearing all my clothes, I am still feeling extremely cold and I don’t want to remove the blanket, but a beautiful and long day is waiting ahead of us.

The first thing I do is go in search of the“washroom”, which is located near the Dhaba and then enjoy some hot chai along with some omelet bread. Since between Sarchu and Leh, there is only one stopover, Pang located at 4700 m, and it is not advised to stay there overnight due to the high altitude, the plan is to reach Leh today – still 250 km away from here.

But as many times in life, things don’t go exactly as planned … 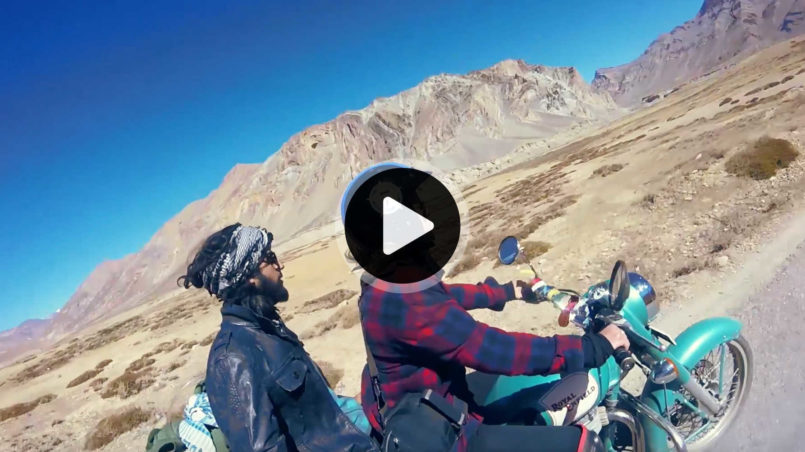 When we start driving, the road is quite fine, with not a lot of traffic, winding along the mountains on one side and along the river bank on the other, until we reach the famous “Gata Loops”. The Gata loops are 21 hairpin bends at an elevation of 4,190 m and they offer a great panoramic view of the whole valley. Before starting the ascent, we stop, take a small break and then continue our drive. As we drive along, curve after curve, at one point, on the left-hand side, we see a pile of water bottles and a small temple next to it. We stop to take a picture and, wondering what it must be, we continue our drive with a strange sensation overcoming us.

When we reach the top of the Gata Loops, we stop to have a snack and, while observing the amazing view, two drivers come up to us asking for water and some nuts since they are feeling a little dizzy because of the high altitude. We give them what they want and ask if they know the story behind the pile of water bottles. Surprisingly they know and tell us the story:

Many years ago, in winter time, a truck broke down on the Gata Loops due to the horrible weather conditions. The driver left to get help but he had to leave his helper behind in order to watch the truck. After one week he came back, the next village was 40 km away and he had got stuck in a storm, but the helper had already died due to exposure to the cold and thirst. Therefore the driver decided to bury the helper nearby and since then strange things started to happen in the area

Travellers who stopped on the Gata Loops always got approached by a man asking for water. If they refused, then bad things would happen to them, like altitude sickness or even death and those who did give him water saw that the bottles would just drop through his hands. These weird things continued to happen until the locals decided to set up a memorial at the site of his death, offering water bottles to calm down the ghost …

This explains the weird vibes I was getting when driving up the Gata Loops. Surprised and silently, we continue our break and overlook the mountains in front of us, getting lost in the ancient paths of the silk road.

As we continue driving further, we enter a different, very dry valley, and again we have to ascend to the highest point (Lachlung La– 5,059 m) in loop formation, though this time the loops are bigger. To avoid this way and to make their journey more adventurous, some people take various shortcuts with 4×4 vehicles where a 1 km loop can easily be completed via a steep 200m ascent. Since these shortcuts are very tempting, we finally decide to take one, but unfortunately, we miscalculated the power of the bike as well as the slope and the soil on the track, which is like white flour offering very little traction. 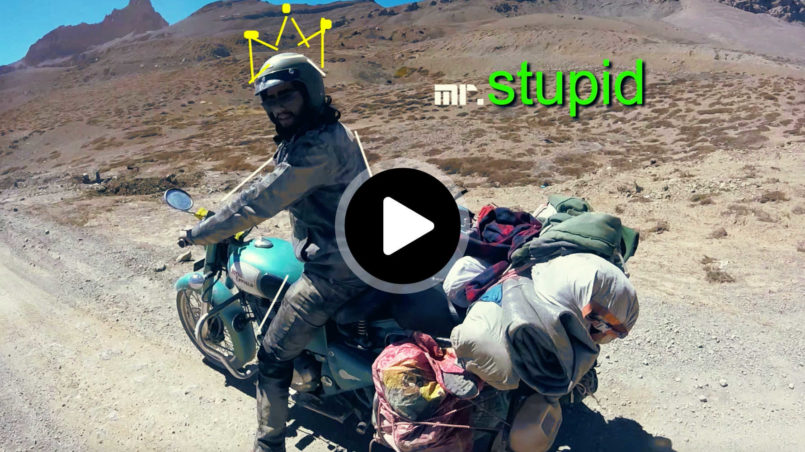 So finally the bike starts sliding back and we experience our FIRST FALL. Everything happens very fast – I totally black out – and, before I can even blink, I am lying on the ground. A little under shock, I immediately check if I can still move all my limbs and if there is any bleeding – while doing so, I ask Sourabh if he is okay. Thankfully nothing happened to either of us, apart from me hurting my wrist and being covered in dust. In the meantime, a truck driver, who has observed the scene, stops and asks if we are okay – we just nod. 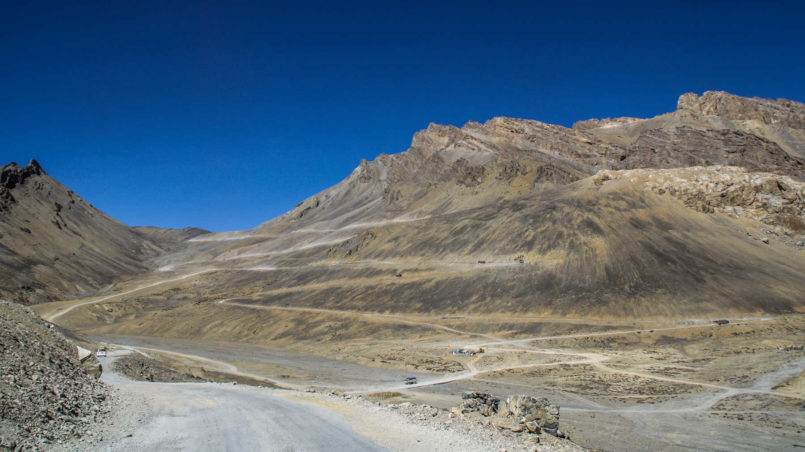 It could have been much worse – we are very lucky!! We continue on our way, not speaking much, with trembling hands and being extra careful. After reaching Lachlung La, we gradually enter another valley which is again very dry, almost monotonous – big mountains made out of very fine powder soil are all around us giving us a feel of solitude but also making us feel like being part of THE WHOLE. Although there are no trees anywhere, the mountains are still speaking to us.

After some hours, we come across a long traffic jam, one side of the road is blocked by many trucks which are carrying different kinds of goods and supplies for the next villages. We pass them to see what has happened and there in front of us we see a bike standing on the left-hand side – alone – and on the right-hand side, we see dark spots on the pavement. We don’t know exactly what has happened but somehow there is a feeling of unease in the air. In order not to block the road further, we pass by. Later, next day, an old villager told us that unfortunately, it was a fatal accident- RIP unknown biker! Even though I don’t know this person, the incident hit me quite hard and I couldn’t think of anything else for the next few days … 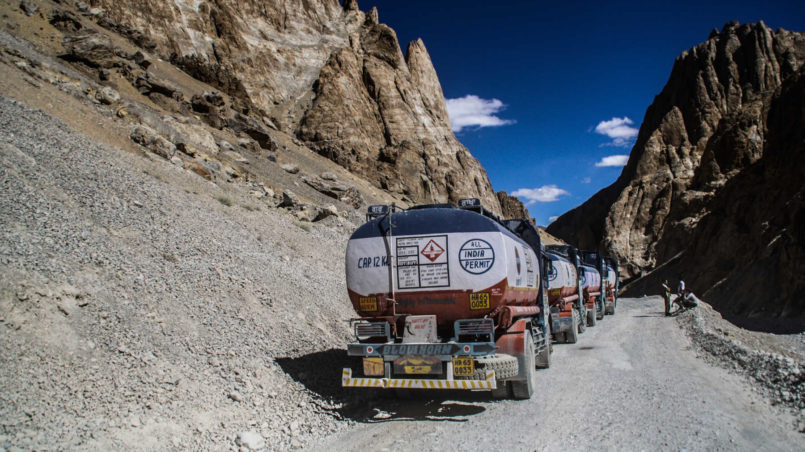 Immediately after seeing the accident, we have to drive on a short but very scary road: extremely narrow and bendy and the cliff is very steep, so steep that I don’t even dare to look down. Ironically, at this time I didn’t know that the scariest road was still ahead of us. I try to remain cool by looking to the opposite side of the road and not to frighten Sourabh, who is driving. Believe me, it was not a nice feeling. Just after having overcome this crazy slope we stop, take a moment to breathe, and check out the interesting rock formations in front of us.

Until we arrive in Pang we barely say two words. We drive into a Dhaba (a roadside restaurant) and order some hot tea and food even though I am not hungry.

Sourabh is being eaten by guilt for choosing this route and putting us in danger and since it is afternoon already, we both decide to call it a day and stay in Pang overnight and hopefully have a better day tomorrow.