In the first part of this article I met an old man. This encounter touched me deep inside and made me very pensive. So here are my thoughts, as I wrote them down. The old man introduced himself as Kedar Prasad Giri, 82 years old and the oldest of four brothers.

I asked: “Why did you go alone to Bheri River to wash this blanket at your age? It could have been dangerous for you. Isn’t there anyone at home to help you?” He answered: “There is no one in my family“. He actually had a wife but she was no longer living with him. “Why, Grandfather“, I asked again. He continued that his wife suffers from an eye disease which got so bad that she lost her sight completely. Since then she has been living at her maternal home.

“I am really sorry to hear that“, I said, “What about your children?” He had three daughters: the oldest died in the Bheri River when carrying water in the rainy season; the middle child committed suicide after three months of marriage as her husband used to drink and beat her. The third daughter was disabled and died at the early age of five due to pneumonia.

I was completely shocked about his grief and his pain. I could feel the tears welling up in my eyes. I asked myself: How could God be so selfish and leave him alone like this? No, this is not fair!

I asked: “Where are your brothers? Don’t they look after you?” He told me that one had died during the ten-year civil war in Nepal led by the Nepal Communist Party (N.C.P) Maoist, and that the other two brothers are happily married but never look after him. Then he cried silent tears.

“What? They don’t look after you at all?” I asked him. “Yes, they always ignore me“. “But how do you get food to eat? How have you managed to survive until now? Who cooks for you?” I asked him loads of questions. He answered: “I have a small piece of land, my neighbors use it and provide me with a portion of the crops which they harvest from it. I survive from those crops. Mostly I cook myself but sometimes my neighbors bring me something to eat. Before, I had a lot of land but later my brothers took it from me, saying that I was alone with no children and wouldn’t need it anymore. So, now I have only one piece of land left, along with my home.”

I was really depressed and thought: why are people so selfish and always only think about themselves? Why are the poor, the weak and the helpless oppressed? Such a selfish world and selfish people …

We were only five minutes away from the main road from where I could catch a bus to Khalanga, Jajarkot but we were moving at the speed of a tortoise because that old man couldn’t walk fast.

Suddenly, I had to ask: “Where do you get money from, you must need it sometimes“. He replied: “Money? Who would give me money? I don’t even get food to survive. So, how could anybody give me money?“. “Oh! I see“, I said and immediately I checked my pocket. I only had Nrs. 700 which is only equivalent to around 6 Euro. I gave him a 500 Rupees note and told him to use it in emergencies only.

What rubbish? From his appearance alone, it is obvious that he would be eligible so why does he need such an ID card?

Now, finally we reached main road. I helped him to cross the road and also advised him to walk slowly. 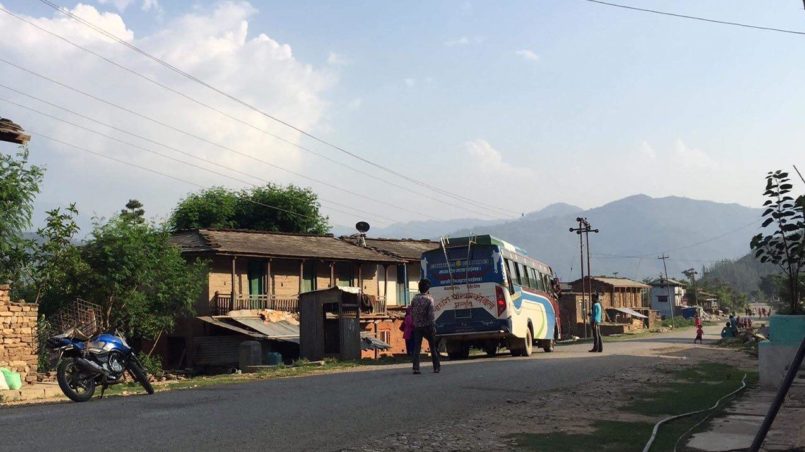 I was thinking about how I could help that old man to get an ID card.

Early on Sunday morning, I left for Chaurjahari again. The days passed slowly with my official work, but then Friday arrived. As usual, I went to Kudu and this time I looked for the old man. I saw a woman at a local shop and decided to ask her about the old man. However, she told me that he had already passed away.

“What! Are you kidding? When did he pass away?” I asked her again but she repeated that he had died two days ago, saying that he was her own brother-in-law.

What the hell is this, I asked myself. How can God be so selfish like this with someone? I felt very bad about that old man. Tears were in my eyes. I regretted that I hadn’t been able to help him and firmly believed that he had been cheated by everybody. I prayed to God that these types of incidents never happen to anybody. The end was tragic for that old man. My heart was totally broken and I honored his memory, with a prayer, hoping that his soul may always rest in peace.

One day everybody grows old, becomes weak and helpless, and has to reach this late stage. So, why do we hate elderly people? It’s not human! Can we even imagine being treated as badly when we ourselves are old? Life is equally important to everybody. We must have a heart of empathy to help others. I don’t know how many old people are left alone when they reach the last stage of their life but we must learn to respect old people. We must give them love, care and support. I think that this is the job of every human being and also the real essence of being a good human.