We grow up in society seeing different types of cultures, traditions, customs and religions. Society is a place where different groups of people grow and survive. The form of society in a certain region depends on the level of knowledge and literacy rate of its people and this is an indication of how civilized it is.

Within one society, various incidents occur and we grow up either by digesting them or by ignoring them. Some people learn from negative events whereas others are provoked by them. Some people try to avoid bad practices while others try to preserve them.

From ancient times, people have been divided into two groups in terms of trusting the facts that lie within society. Ancient groups of people were more drawn towards supernatural beliefs whereas modern people, who are influenced by knowledge and education, believe in modern science and logical facts. People who survive in society, who try to understand society, who love reflecting on society, try to represent society in their art and creations like a mirror. People who survive within a society have their own stories. Some stories may be beautiful, some quite hard, some may be very inspiring while others may be very disappointing and unbelievable. Among such many stories, today I have chosen one story from my society.

This is a true story about a family who lived in the village where I lived for some time while I was working in my professional field. The story may appear inappropriate for some audiences and readers who live in highly civilized communities. They may think it is disgusting or hypothetical. They may also think that it is a mere coincidence that the future offspring experienced such a fate. But, I have to say my society considers it true and believes it happened because that was the curse of Grandma. And the same thing has happened to the following generations of Grandmas, just as she said.

This story is typical of the kind of tale that my society believes in and talks about. It reflects the thinking of rural people in Nepal. This is a story of events that are really happening in my society and every family experiences similar. 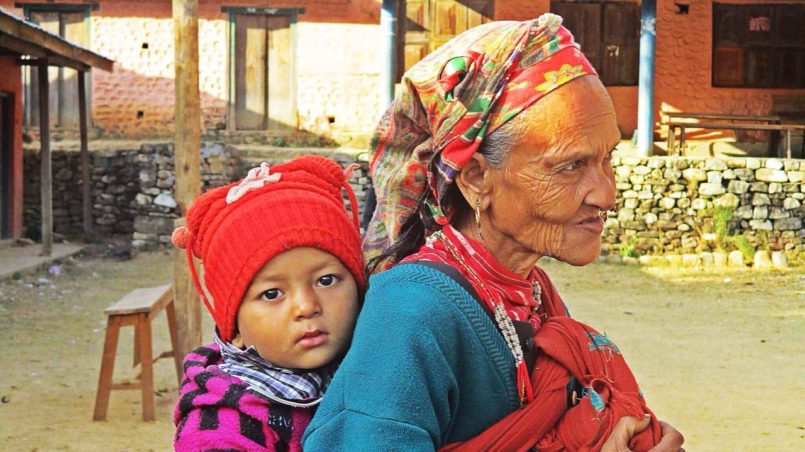 This is the story of Grandma. A Grandma who was herself the second wife of her husband survived in a large family. In total there were 14 members in her family. She was the wife of the fourth son of her father-in-law and mother-in-law. Now, let’s us go back to a time when Grandma was not a Grandma, when she was young. Grandma was about 14 years old when she got married to her husband who was 19 years old. One year later Grandma became pregnant for the first time, she gave birth to twin boys but unexpectedly they didn’t survive. She had given birth to Siamese twins. Later she gave birth to two other babies, a girl and a boy, but they also died after having only survived for a few years.

It is important to understand that neonatal and child mortality rates as well as the maternal mortality rate were very high at this time. The first wife of Grandma’s husband also died due to delivery complications.

There were no trained health specialists to assist in deliveries at her time and children died because of many causes such as birth asphyxia, pneumonia, diarrhea and malnutrition whereas mothers used to die because of complicated delivery problems such as hemorrhaging,  placenta praevia, placental abruption, ectopic pregnancy and so on.

It was common that couples had to experience the deaths of four or five of their children. It was very difficult to save children at Grandma’s time. People simply didn’t know about health examinations and treatment possibilities.

There were no health institutions to treat mothers and babies. The only method to treat all kinds of patients was the traditional method and the use of supernatural power was highly practised at this time.

There were no markets, no goods, no communication possibilities and no transportation. The men in villages had to wait until winter to leave to fetch goods, salt, sugar, kerosene and clothes from faraway cities. They had to do this in winter when the water levels had fallen which made crossing the streams and rivers en route easier. People had to walk barefoot for more than one month to reach these faraway cities. People would take white funeral clothes with them because the chances were very high that one of the group would die on the way. Life was very hard at Grandma’s time.

After Grandma’s husband returned alive from a faraway city, Grandma again became pregnant. This time she gave birth to a baby boy and her child survived. Later, Grandma gave birth to two other boys who also survived. Grandma had to struggle really very hard because, at this time, pregnant women were not allowed to live in their normal home, they had to live, eat and sleep in a separate animal shed like home far from her family and husband because they were considered to be impure.

Grandma again had to suffer a lot to save her children after her husband lost his life while working following a snake bite. Often she didn’t eat so that she would have enough to feed her sons; she stayed awake many nights, trying to get her boys to sleep; she always made sure that her children had warm clothing even if she did not and she went begging in order to provide for her children. Since her family was very large, there was always scarcity which led to disputes in Grandma’s family.