Lisbon has an incredible atmosphere and I cannot wait to come back to breathe it again. It’s authentic, young, colourful and dynamic. It’s like it’s looking behind and ahead at the same time. Or, at least, that’s my perception.

Within an hour of the capital you can find Sintra and Cascais, two must-do day trips.

Day 2 was dedicated to Sintra, located only 40 minutes away by train from Lisbon. As soon as we arrived in the city, just outside the train station, a dozen people offering guided tours welcomed us. The choice was huge: tuk tuk tours, jeep tours, scooters as well as a hop-on-hop-off service.

Some of them are really close to each other, while others are quite far from the centre and trickier to reach, not to mention the fact that visiting more palaces means an extremely expensive trip (at least, if you’re a student like me!). That’s why, according also to the suggestions of our host, we opted for Palácio da Pena. Unaware of the fact that the palace literally lies on a high wooded peak, we started walking, ignoring the tour offers.

About 45 minutes later we were still wandering without a clear idea of how to reach the palace when an electric tuk tuk stopped beside us. That was the beginning of an extremely funny experience! I still don’t know if Pedro, the driver, can be described more as highly skilled or completely fearless. Probably a mix of both. The ride through the narrow and bending streets up to the top of the hill was unforgettable, adrenaline-filled and scary at the same time. Hands clamped around our seatbelts, laughs, screams and hair dancing wildly in the wind.

Pedro dropped us off just outside the entrance to the palace park. The Parque is topped by the Palácio da Pena and, higher than that, at about 530 metres, by the Cruz Alta or High Cross. 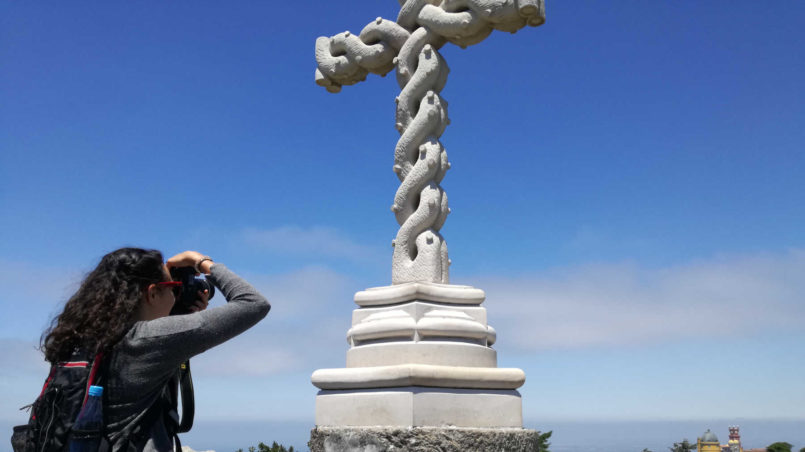 We decided to walk through the park’s romantic gardens to the cross and we were rewarded with the sight of huge trees, tropical plants, camelias and small lakes. The park has over 500 different species of trees from all over world.

The view from the cross is breath-taking – you can see all over the park, the nearby hills and the palace, which is built to be seen from any point in the park. 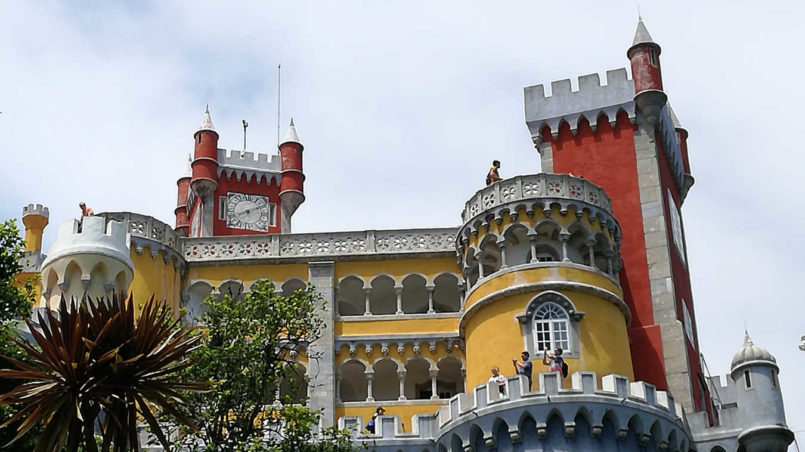 The Palácio, commissioned by King Ferdinand II, is considered the greatest expression of 19th century Romanticism in Portugal. It’s whimsical, unusual and colourful, with terraces, domes and towers in pink and lemon. 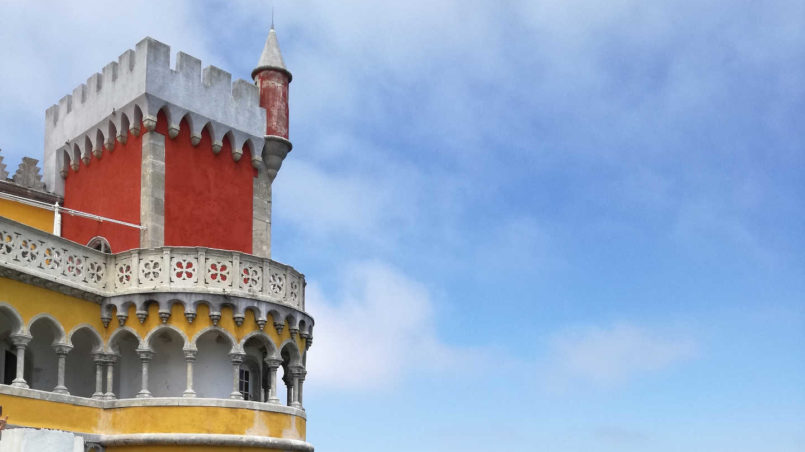 Some aspects of the architecture reminded me of the Arabic style, which I found out be called Moorish style, a variation of Islamic architecture that developed in the Iberian peninsula. Every corner of the palace is postcard perfect and different from the others. After exploring the Palácio, we had a snack at the rooftop bar and restaurant, before we set off for the city centre.

We took the 4km zigzagging and steep walk that, through mostly pine and eucalyptus woods, links the Parque to Sintra-Vila, the city centre. Sintra-Vila is a UNESCO World Heritage site, with cobbled alleyways dotted with small bars and shops. We stopped in a small bar for a hot chocolate and a piece of cake and to fight the wind which accompanied us on our descent from the palace.

Two artists were singing and playing guitars just outside, amplifying even more the allure of the city that, with its mountains, forests and glittering palaces, is the perfect Portuguese fairy tale. 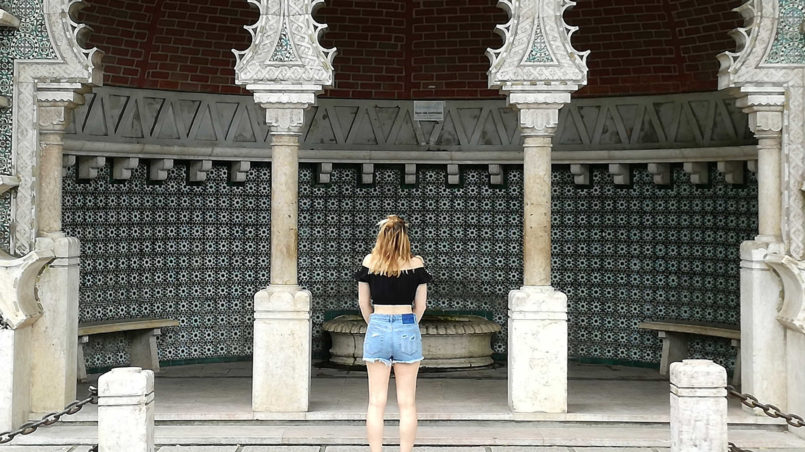 Day 3 was Cascais day. Cascais is a fishing village about one hour from Lisbon that attracts holidaymakers and surfers to its golden bays. I’d like to say more about the city and the beaches but, actually, as soon as we got off the train, we went looking for a way to reach Cabo da Roca, one of the highlights of this Portugal escape. From Cascais you can go on a 20-minute bus journey to reach Cabo da Roca. Although it is not cheap at all but I think it’s the best and only way to get there. The bus station is really close to the viewpoint and there are no entrance or additional fees to enjoy this wild place. 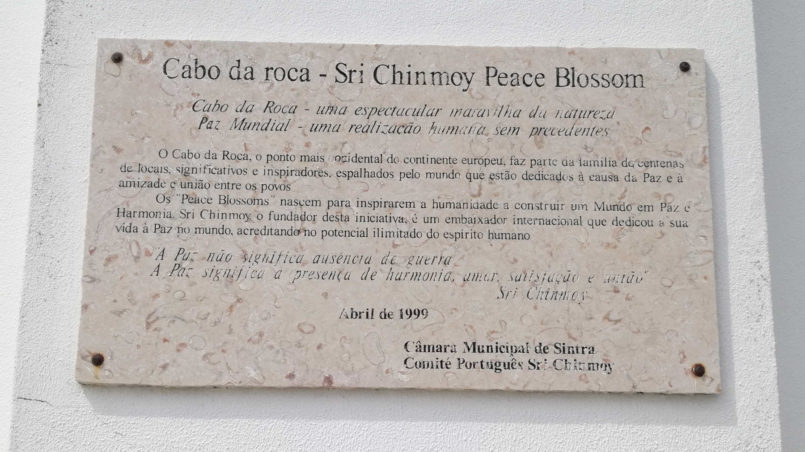 As soon as I got off the bus, my attention was immediately caught by the lighthouse and, getting closer to it, I was surrounded by ocean and cliffs. Somehow this took me back to my time in South Africa, when I stayed in Cape Town. Around Cabo, the cliffs are more than 100 metres high and cut the ocean and the horizon, that seem to be limitless. 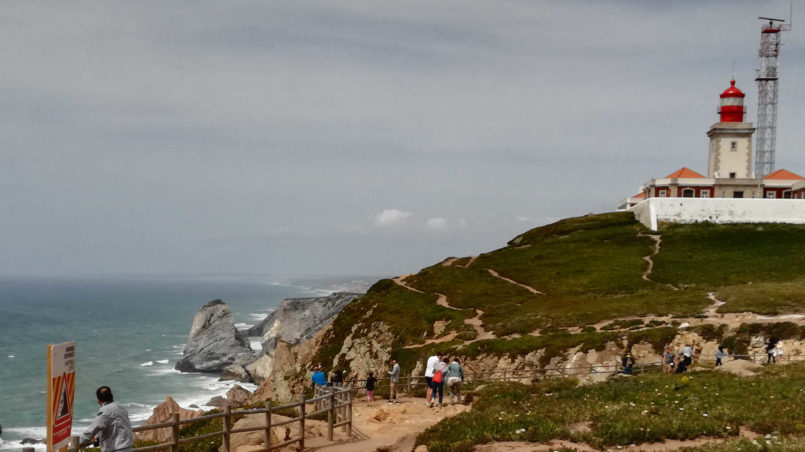 The wind was extremely strong and we were not prepared for that (if you go there, take very warm clothes!), so we stayed not more than one hour in Cabo but it was unforgettable. 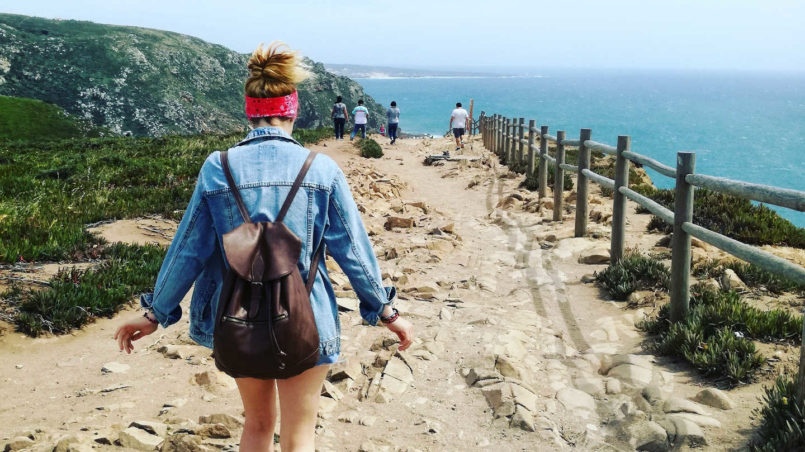 The feeling of being free while at the same time feeling a little afraid was unique. We walked all around the cape and found a cool and less windy spot on the top of a cliff to enjoy the view. An experience not to miss at all!

Portugal never ceases to amaze me!