Every time I plan an escape within Europe, I find myself so grateful for the existence of low cost companies (long live Ryanair!), Airbnb and hostels.

And it’s with Ryanair that I flew to Lisbon, where my Airbnb host, Pedro, was waiting for me in a small studio near Bairro Alto, the more party-loving and central neighbourhood. I planned the trip to go to a concert and I didn’t have expectations at all as I had never before considered visiting Portugal. And maybe that’s why I fell in love so deeply with it! 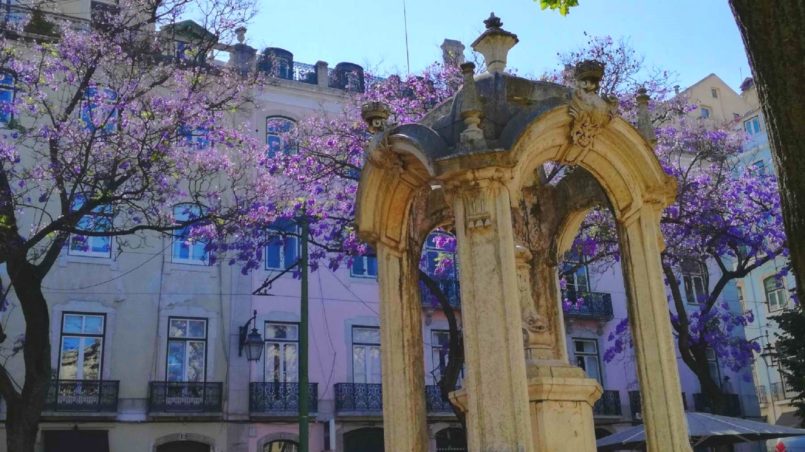 The Portugal experience can be many things: you have captivating cities, cobblestone villages, blue seas and golden beaches, medieval castels … not to mention the great food and wine. The view from the airplane window is idyllic and that’s only the beginning!

I spent six days in Portugal and for the first four days I was based in Lisbon, travelling to the nearby cities of Sintra and Cascais, while the last two days were dedicated to Porto.

The Lisbon panorama is simply postcard perfect. The city is built on seven hills and, even if for a non-fit person like myself it was quite a challenge, it is definitely Lisbon’s most characteristic feature and trademark.

Somehow you always find yourself in front of a view, be it a cobbled alleyway, the famous tram 28, the stunning Praça do Comércio or the Tejo river. What I liked the most about the city was simply walking through its streets with an unknown destination. I think that’s the best way to unravel its beauty, made up of local tabernas, azulejo-covered houses, pastelarias and modern restaurants. 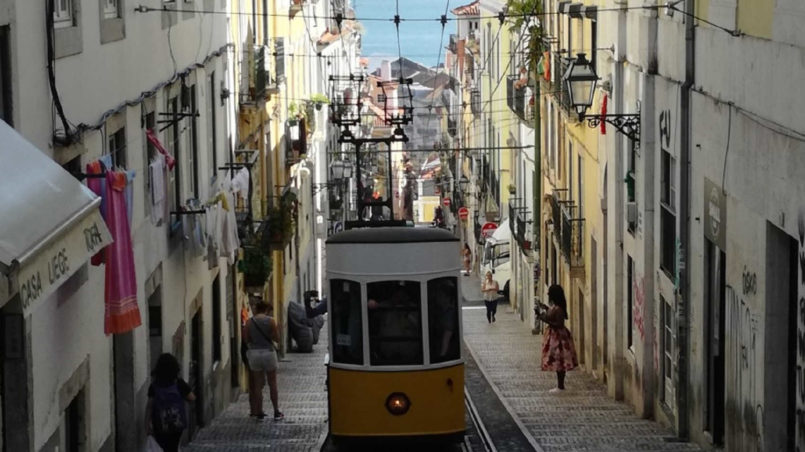 Praça do Comércio is found on every Lisbon what-to-see list. It’s the largest square in the city and an important transport hub (with trams heading to the Belém district and ferries). It’s located on the edge of the Tejo estuary and if there’s a word to describe it, that is magnificent! A statue of King Jose I is at the centre of the square and traditional, yellow-painted buildings line the three sides. Imagine this view, the breeze from the Tejo and music coming from the guitars of two street artists! 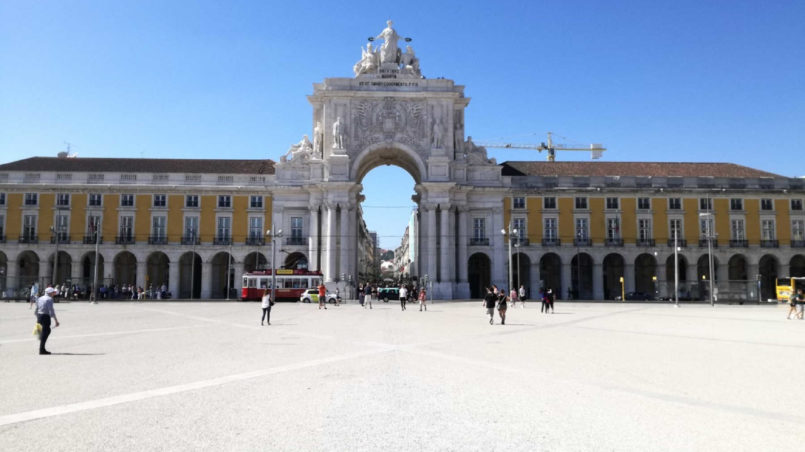 Another thing which you absolutely have to do in Lisbon is have a drink in one of the many terraces known as miradouros, which are scattered across the city. I went to Park in Bairro Alto, the rooftop of a car park on the 7th floor which has been transformed into a bar. The cheap prices and the stunning views make this terrace a perfect place to relax and to take a break from walking up and down Lisbon’s streets.

The wooden furniture and the small potted trees give the impression of a little urban garden over the city, the river and Ponte de 25 Abril. From closing time late at night till 1pm you can even take your own drinks and have the breath-taking view for free! 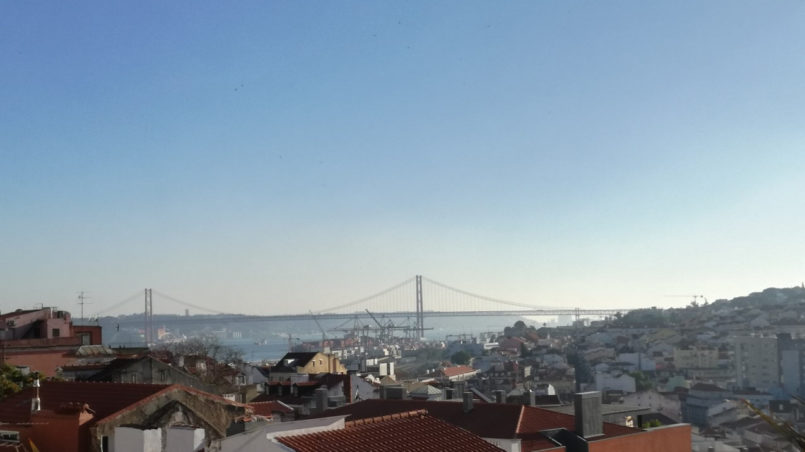 Not to miss is also Belém, the most western suburb of the city on the banks of the Tejo river. You can easily reach it by buses and trams leaving from Praça do Comércio. I opted for the tram as it takes only 10-15 minutes while the bus takes longer (with the rechargeable Viva Viagem card you can use all transportation in the Lisbon region).

The Atlantic breeze, the small boats and the stunning monuments took me back to the Age of Discovery and the glory of Portuguese navigators that I had studied at school. Torre de Belém has become, together with tram 28, a symbol of Lisbon. I’ve seen it everywhere: on postcards, kitchen aprons, magnets …

Being finally in front of it, well, it’s simply stunning. Not suprisingly, it’s a UNESCO World Heritage Site. The tower juts out of the water on the Belém riverfront with its military yet so Renaissance architecture. The small beach just in front of the tower was the perfect spot to enjoy the view, to chat with the just-met American friend and to refresh my feet as temperatures were quite high. 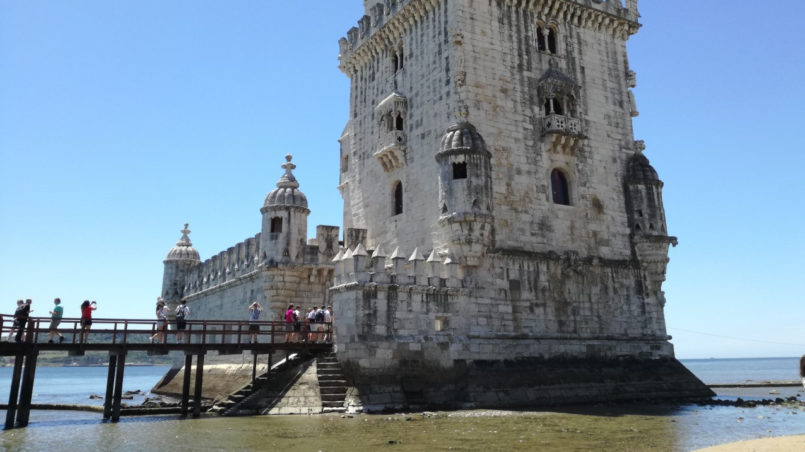 Another great aspect about Lisbon I definitely have to point out is food. Breakfast meant to me pastel de nata and pão do deus with coffee and orange juice: a sugar-coated nirvana.

Pastel de nata are crisp pastry nests filled with golden custard cream and dusted with cinnamon while pão de deus (literally “heavenly bread”) are golden brown sweet rolls filled with coconut. They were a constant temptation for me during my days in Lisbon since at every corner you can find a pasteleria, they’re everywhere!

As for the typical Portuguese cuisine, I tried it out for dinner on the second day in a local taberna in Barrio Alto and I fell in love with chouriço and Bacalhau à Brás. The first dish is a very very very spicy sausage made with pork, fat, wine, garlic, salt and paprika. The second is one of the best dishes I’ve ever eaten – shredded cod with onions, eggs and potatoes, a must-eat! 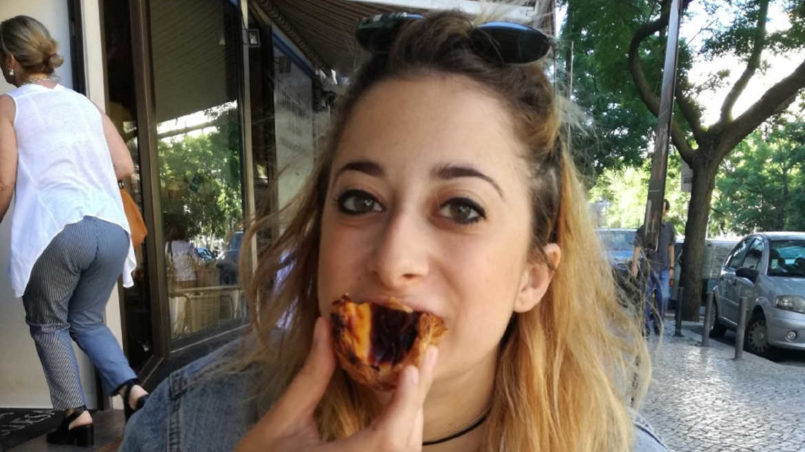 Last but not least, Lisbon means cheap booze, pubs, cocktails bars and tapas routes. At night the narrow cobbled streets of Bairro Alto turn into one of Europe’s most boisterous drinking venues.

The first night, together with my sister and a friend, I joined the tapas route. It’s a food and drinking route in Lisbon’s historic districts, such as Rossio, Cais do Sodré, Bairro Alto and Alfama. Bars chefs create tapas menus with styles and ingredients from all over the world. For 3€ you get a tapa, that is an appetizer or snack, together with an Estrella Damm beer and a stamp on the route map. Getting the same beer at every bar is not the best, but it’s something I’d recommend for a fun night in the city!

Lisbon has an incredible atmosphere and I cannot wait to come back to breathe it again. It’s authentic, young, colourful and dynamic. It’s like it’s looking behind and ahead at the same time. Or, at least, that’s my perception.

Lisbon, you won me over!