Delhi is such a large and chaotic city and even though there are millions and millions of people all around, I sometimes get the feeling of being all alone. Everyone is in a hurry, running here and there and bumping into you. Wherever you go, you will find a crowd of people.

In such a big metropolis, and probably in most big cities, it is difficult to find peace and harmony since you can really feel the stress in the air and it seems almost impossible to get away from it. Since I have always lived in small cities, it is difficult for me to cope with the big city life, I am used to cycling or walking rather than taking the underground and being stuck in traffic for quite some time.

But all that is okay and still manageable for me as I can adjust – the biggest issue though are the people. It seems almost as if the busy and stressful lifestyle they have to face every day has turned many of them into very grumpy people (of course you can’t generalize!).

When I give them that occasional friendly smile, as I am used to doing back home, they just look at me in a very surprised way. It almost seems as if they have never experienced anything like this before, I get the impression that they perceive it in a negative way. City life just seems very tough, people turn angry and tense easily and tempers run high – therefore fights can break out quickly; a small thing like waiting too long for your food or being stuck in traffic can make people snap and I know because I have seen it.

But I think that if I lived there permanently, I would probably feel and behave differently as well; the constant crowds of people, the dirty and dusty roads, the crazy traffic with all the honking, the heat, etc. – these are all factors which constantly affect your mind and which eventually will make someone grumpy. The good thing though is that among all this chaos and craziness there are still many positive things about Delhi, you just need to look out for them.

Here I want to share a very special and unique incident that happened to me recently:

I was in one of the most crowded neighborhoods in Delhi – Old Delhi, looking desperately for the washroom (for men they have open urinals, which make the streets smell incredibly bad, but for women it is a little bit more tricky). After a while I see a McDonald’s, the only proper “restaurant” offering a seating area, in walking distance. When I enter, to my surprise they say that they don’t have a washroom. I continue to walk some more, until the end of the street, and at the big crossing in the mid of the chaos I see a temple – the Sri Digamber Jain Red Temple, known as Lal Mandir.

Now I would like to say a few words about Jainism, since not many people (including me, before coming to India) know about this fascinating religion: Jainism or Jain Dharma is an ancient Indian religion.

The main principle on which Jainism is based is live and let live; the others are non-violence, non-absolutism, truth, not stealing, chastity and non-attachment. These principles directly point towards a vegetarian lifestyle. But besides not eating meat, Jains also don’t eat root vegetables, such as potatoes, onions and garlic, since tiny organisms are injured when pulling up the plants. As they believe in rebirth they also believe that causing harm to any living being will lead to bad Karma.

There are two main sects in Jainism: Digambara who don’t wear any clothes and Shwetambar who wear white loin clothes. The monks and nuns of the Digambara sect also carry a broom made out of peacock feathers with which they clean the floor upon walking or sitting down. Why? So that they do not step on any insects or parasites along the way. Amazing, isn’t it?

I ask the gentlemen at the entrance if they have a washroom and if I can enter the temple, and he, very friendly and almost smiling, says „Yes – just take off your shoes and enter“. I do so and walk along a red long carpet until it finishes, then I turn to my right and see the washroom sign and feel incredibly relieved.

It is amazing that just a few meters away from the dirty and crowded streets, just when I was thinking that there is nothing there, I managed to stumble across this beautiful, clean and peaceful temple with nice people all around. It almost feels like an oasis in the middle of the desert. Delhi never ceases to surprise me! But this is not all, it gets better: after inspecting the area of the temple I see a big sign saying “Charity Birds Hospital”. 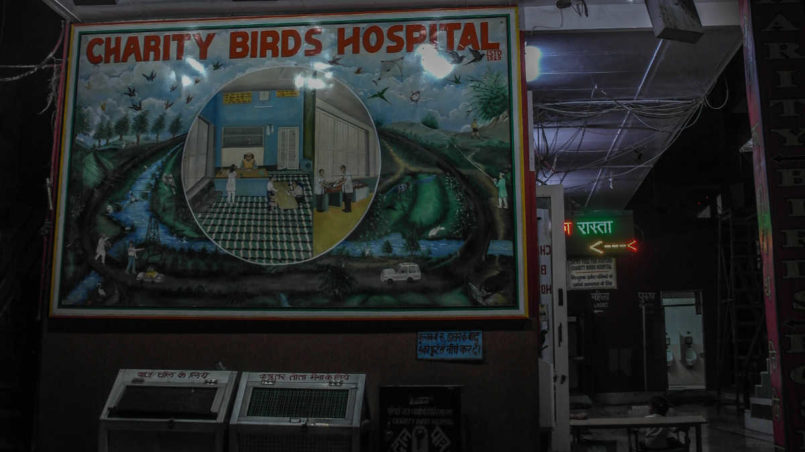 Since I am very curious what this is, I start walking up the stairs, until the third floor. On the walls there are many paintings; paintings of the followers and of Lord Mahavira himself – the last Jain spiritual teacher. Two in particular catch my eye, one of a Jain sitting in the famous Yoga Lotus position (Padmasana), and meditating in nature with his back towards a tree and animals around him and another of Lord Mahavira standing with a snake next to him. Even though snakes can be poisonous and potentially kill you, in Indian culture they are worshipped. The snake just bit him and, instead of blood, one can see that milk is coming out. This has a symbolic meaning and to explain the image the following story is written next to the painting: Lord Mahavira’s feet were stung by a ferocious bite from the King of Snakes, Chandkaushik. Milk flowed from the feet of the sympathetic Soul Lord Mahavira. An act of repentance by the King of Snakes.

The meaning to be drawn from this is not to harm or kill others who wrong us (the King of Snakes by biting Lord Mahavira) but instead guide them towards the right path. By showing milk – which is considered very good and positive in Indian culture – instead of blood, Lord Mahavira taught the King of Snake to feel guilty for what he did.

Once I arrive on the third floor, I open the door and step into a room, again full of paintings and meaningful stories written on the walls. I stop and read. One painting shows a man and a pigeon on scales and a hawk watching them, with the following story written next to it: MERCY Brave and merciful king gave pieces of his own flesh and finally his whole life in exchange for saving a pigeon (demi-god) from its prey, a hawk (demi-god). Both demi-gods bowed assuming their original divinity and blessed the king for his attempt to alleviate the pain.

Animals play a very important role and there is a symbolic significance to them, they are seen as vehicles of Gods or deities themselves, and therefore sacred and worshipped. Their role is so important that the king wanted to sacrifice himself instead of the pigeon. On the bottom right of the painting there is a Swastika, a very old symbol of good luck and well being, which Hitler unfortunately turned into the symbol of evil.

After that I start walking down the aisle. On both sides there are many cages; on my left the bigger ones, and on my right the smaller ones and each of the cages has a different breed of bird inside. I see four big hawks on my left, different colored parrots and budgies on my right and many pigeons as well. Some birds have bandages around their legs and some are just laying and resting.

I stop in front of the pigeon cage and observe one pigeon which keeps walking in circles with its neck inclined to the right. Then I hear some steps from afar and a voice telling me that the pigeon is paralyzed. The man introduces himself as the veterinarian of the hospital and tells me about his work and how it all started. 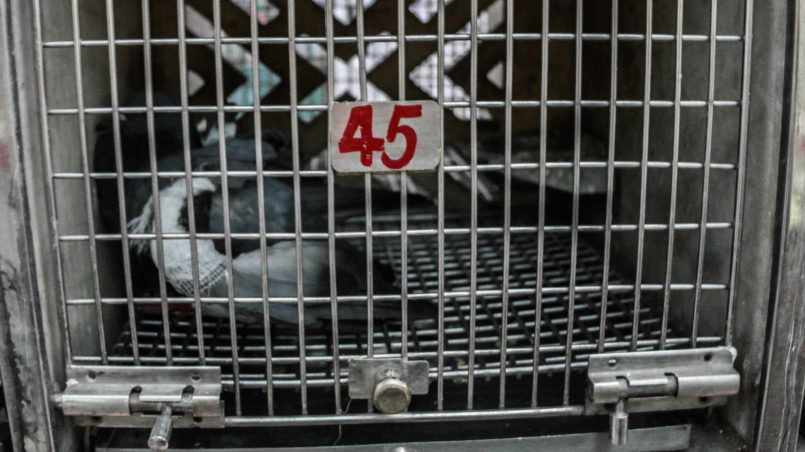 The Charity Birds Hospital opened around 85 years ago, in 1929, and is run by the Digamber Jain Community, based on the principle of “live and let live”. The hospital is very unique since it is completely funded by donations of which more than 95% are from Jains themselves.

The team of qualified technical staff and doctors provide treatment to injured birds which different people bring to them or they themselves find on the streets. At the moment there are about 5,000 birds of various types in different stages of recovery in the hospital.

They treat and feed them as long as is needed and then they release them back into the wild where they belong.

Healthy birds, such as those which have been abandoned by their owners are let outside to fly twice a week. Almost every day about 50-60 new birds are admitted to the hospital’s indoor section, and almost the same number are treated in its outdoor section. Besides treating the birds, the hospital also offers guidance for birds lovers where they teach simple techniques and give advice, by mail or on phone, on first aid, providing fresh drinking water and grains, avoiding keeping birds in cages, covering ceiling fans with steel wire mesh to avoid bird injuries and bone fractures to birds.

Even though the hospital is open 24 hours, 365 days a year, the visiting time ends at 9 pm and, therefore, the veterinarian asks me to leave. I would like to stay longer but I totally understand, and thank him for being able to visit and for the nice talk we had.

Just when I am walking down the stairs, two people carrying a box with an injured bird are coming towards me and all I can think is: WOW, it is really amazing to see that something like this exists in the world, especially in one of the busiest places in Delhi, I have never seen something like this before and wasn’t even aware that something similar to the Charity Birds Hospital existed. I am truly impressed!

Getting to know this place and these wonderful people made me really happy and fulfilled and I realized more than ever that beauty exists everywhere, even in the most chaotic place – you just have to believe in it and look out for it.

Good luck in finding it 🙂

What do you think about the Charity Birds Hospital?