Another exciting day full of new things to see lies ahead of me and I am already curious about what I will discover today.

Early in the morning, we walk to Connaught Place, a large shopping area in the centre of Delhi, to grab breakfast. On the way there, just a few minutes after leaving the hotel, we pass along a big street and on our right we see so many people just sleeping outside on the ground, next to the street. They live there. Some are making a small fire to cook something, others are just lying around.

I can also see many children. The conditions under which they live are really not good. Apparently these people all have homes, in different villages outside the city, but since they come here to work and earn some money, they are forced to sleep outside. For men there are “open” urinals all around the city, literally right in front of my hotel there is a urinal and a sort of open public shower which people can use, but for women the situation is somewhat more complicated.

Once we arrive at Connaught Place, the situation doesn’t change much; even though it is a shopping area, with fancy shops, restaurants and cafes all around, you can see an array of beggars, from very young children to old men. Some are begging, others are sniffing glue out of a plastic bag to stave off their hunger and to get a high, others are performing some mini show and others are offering all kinds of services: from shoe cleaning, ear cleaning, bag repairing to even offering scales to chek your own body weight.

People are sleeping on the dirty ground everywhere, and the smell of urine is omnipresent. There are also many disabled beggars, with no legs – most probably suffering from leprosy and, due to the fact that they cannot afford a wheelchair or prosthesis, they move themselves forward on a sort of rolling plate. Every two minutes somebody comes to ask for money or to offer their services.

It is truly sad to see this great contrast: some come to Connaught Place for pleasure, to go shopping and to dine in good restaurants – immersed in their own world and thoughts – while others are struggling to “just survive” every day.

From Connaught Place we grab a cab which takes us to Old Delhi, a predominantly Muslim area in Delhi. We go and visit the Red Fort which was the residence and the political centre of the Mughal government for nearly 200 years, until 1857. The Mughal Empire was an empire in the Indian subcontinent, ruled by a Muslim Dynasty, from around 1555 until 1857. Inside the Red Fort there are many different buildings, such as palaces, pavillions, mosques and gardens with a lake.

It is interesting to read and learn about the history of Delhi and the different Muslim Dynasties which ruled in the city over many years.

Afterwards we walk around the busy and crowded streets of the Old Delhi Bazaar where you can literally find anything you desire, from silver jewellery, self-created perfume, shoes, traditional sarees or kurtas (traditional Indian dresses), dried fruits, electronic equipment, to name but a few.

After some time I see a crowd of people, all waiting for something. When I get closer, I see that they are distributing some food for free. Apparently this happens on a regular basis, people who just feel happy will cook a lot of food and bring it to the streets to serve it. Everybody can have a plate, or even two. Amazing!

As we go deeper into Old Delhi, the area and the people change drastically; there are many women wearing burkas and I feel as if I am back in North Africa, rather than in India. We go to eat in a very famous restaurant, called Karim’s. It is a historical restaurant which was established in 1913 by Haji Karimuddin and was considered to be “the city’s most famous culinary destination”. His concept was to earn fame and fortune by serving royal food to the common man and this is exactly what he did. It is believed that he was one of the cooks who served the king.

I must say the food is extremely tasty, especially the kebabs – simply delicious. Since it is typical here in India to give yourself a little treat after eating food, a special mouth freshener called paan, I also want to try it. It is made out of heart-shaped betel leaves and areca nuts. There are different numbers (from zero to 320) which represent the intensity of the betel leaf, since it has some tobacco in it. I go for the lowest possible number.

Additionally the paan is filled with different flavoured herbs and spices, for example, a sort of jam made out of rose petals, that you can choose yourself. It is wrapped up in shiny silver foil which looks like aluminium paper, but it’s not, since even that is edible. Truly refreshening and delicious! 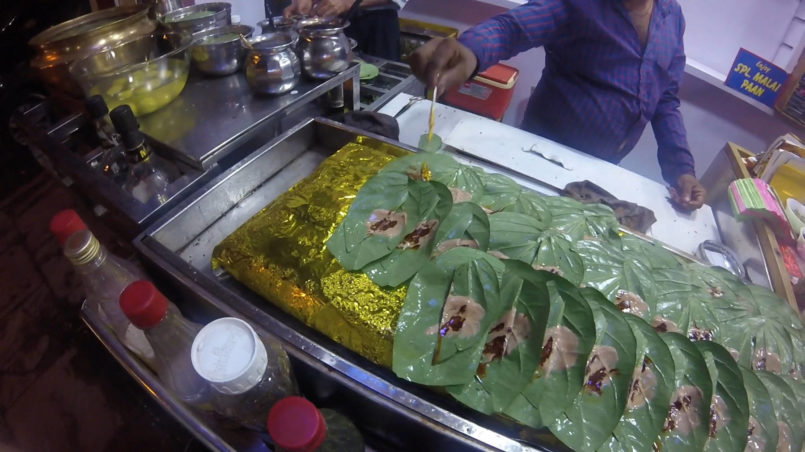 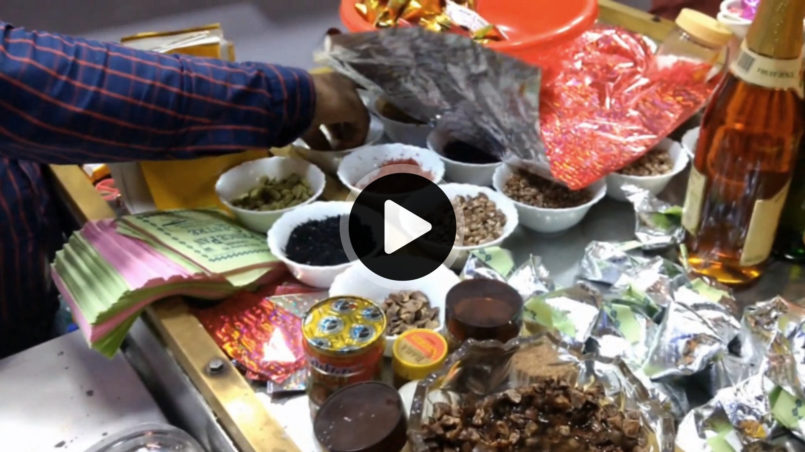 From there we take a rickshaw to travel to an important Muslim pilgrimage place, visited by thousands of believers every week, the Nizamuddin Dargah (mausoleum), which is the mausoleum of one of the world’s most famous Sufi saints (saints who played an important role in spreading Islam throughout the world), named Hazrat Khwaja Syed Nizamuddin.

Before entering, we are asked to remove our shoes, as well as to cover our hair. Outside the mausoleum there are many stands selling flower baskets, which are offered to the Saint as a sign of respect. We buy one and take it inside. Because women are still not permitted to enter the mausoleum itself, I cannot enter and, therefore, Sourabh has to offer the flowers.

There are many people inside the mausoleum, which is quite large, sitting on the floor and I notice that many of them are very sick. Just a few meters away from me, there is a girl with her family and she is having mild seizures. There is a doctor available, offering free patient care just right next to us, but they explain to me that they don’t want to go to the doctor.

They came to this place of pilgrimage to seek “spiritual” help for their daughter, as it is believed that it has healing powers in the same way as, for example, Lourdes (France) for Christians. We walk around and wait for the music concert which takes place every Friday but unfortunately it is cancelled due to the rain. Next time! 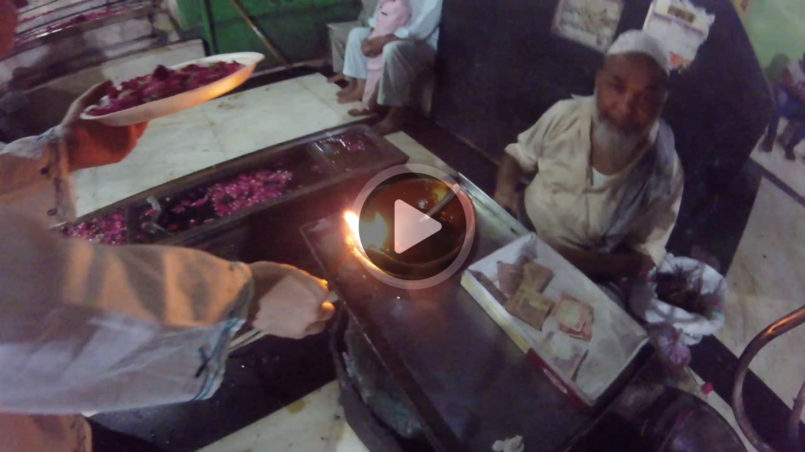 On the way back home, just as we are approaching the street where my hotel is located, we see some cows and street dogs having their “dinner”: trash! Opposite them some people are still having an open air shower and brushing their teeth. I need to hold my breath since the smell from the “open” urinal and the day’s accumulation of trash in the tiny side street of the hotel is unbearable. Such things you only find in Delhi …

I definitely still have a lot to explore in this city, as it seems as if you can explore for months and still not be done with everything but now that I have seen some of the most important places in Delhi, I have to say that, even though it has its negative sides, it’s an amazing city with much to offer.

You can literally find whatever you are looking for and whenever you want. The city is alive 24 hours a day. Its rich culture takes you back in time, where you can see the development of the city – starting from the different Muslim dynasties all the way to British India until Independence, gained in 1947. It is true that many parts of the city are dirty, smelly, crowded and loud but this is part of its vibrant nature and it wouldn’t be the “true Indian experience” without it.

What I really like about Delhi is the variety and the fact that there are so many different main religions such as Hinduism, Buddhism, Islam, Jainism and Christianity who all live peacefully together in one city. Because of this, as well as the free daily food offerings in temples and on the streets, the whole world should take an example from Delhi.

Note: If you are interested in knowing more about Delhi and seeing some more impressions, simply click here and watch the video.